The graphic designer who refuses to own a car

Cycling will always be for transport, Clara noted. People tell her that she can already get her own car but for this cyclist, it doesn't appeal to her. 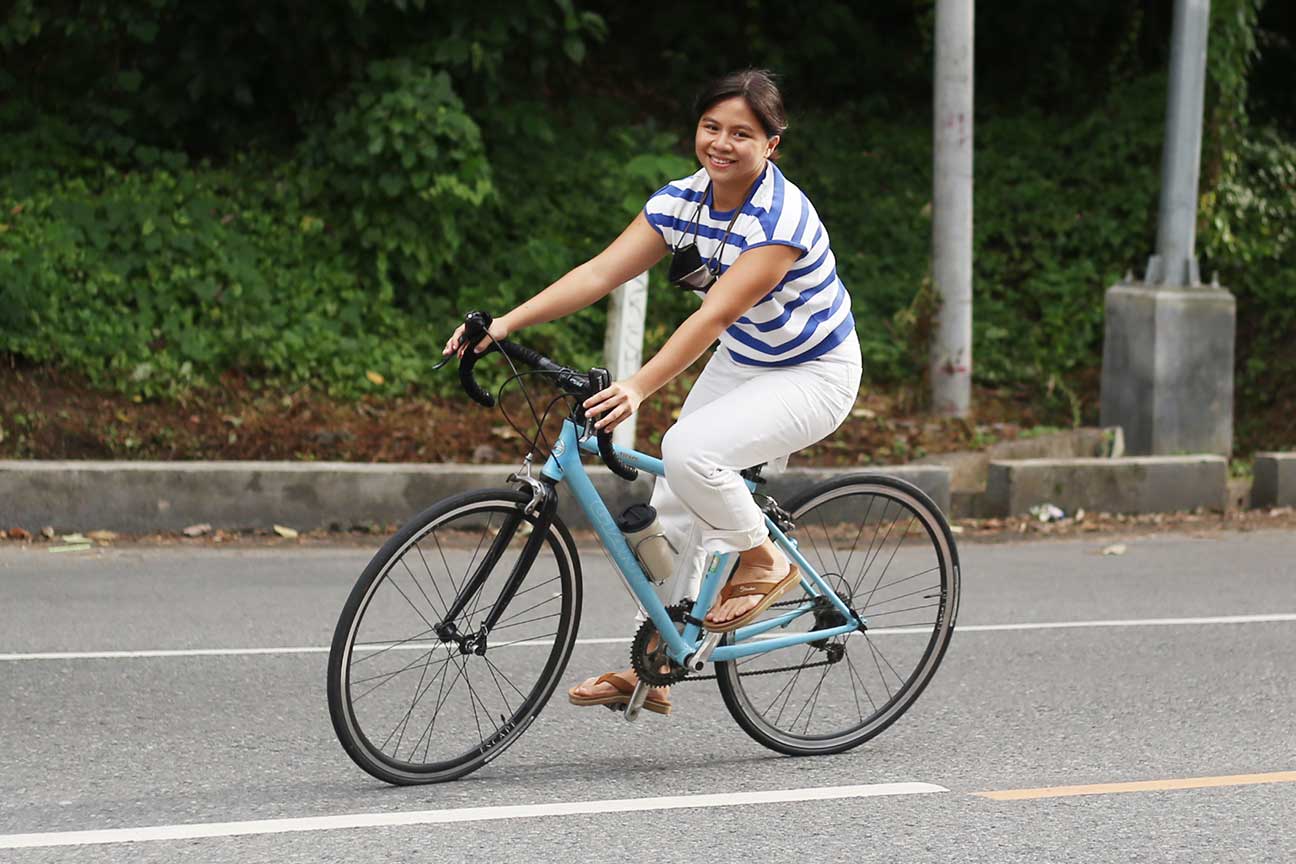 This graphic designer couldn’t stop talking about typography when we had an afternoon chat over coffee at El Union. The conversation opened with her road bike. She told us that it was a Giant Escape and what made her fall in love with it were the letters on her bicycle — everything, except for the brand’s name, was in Optima, her current favorite font.

Clara Cayosa is a graphic and type designer who recently moved to La Union earlier this year. She used to live in Pasig but when the pandemic hit, she decided to go back to her family in Tuguegarao. Living in Cagayan, a place far from interacting with fellow creatives, was quite difficult for her. And now, she’s in surf town.

“It’s symbolic, the name of my bike’s model and me moving here to La Union — which is an escape from my escape, which is supposedly Tuguegarao. We escaped Manila to seek refuge but for me, sadly, it didn’t turn out to be a beneficial thing. I realize that I like conversing and I like to be surrounded with a community, especially the creative community.”

When it was announced that Metro Manila will be put into lockdown, Clara opted to stay in Tuguegarao because it was relatively safer there because of open spaces and she’ll be with her family. The plan was to just be there for two weeks because she thought that the crisis would just be short. Well, we’re still here and she ended up residing there for months.

She recalled that it was easy at first but it eventually got difficult because she started yearning interaction from fellow creatives. While she appreciates her parents trying to relate to her struggles and needs, there was still no connection.

“I couldn’t find anyone to interact there creatively so my outlet became running and biking. I borrowed my uncle’s mountain bike, which is a little bit bigger than me,” she said. “But I’m really comfy with bikes. I’d go to the hills and nearby towns to meet friends.”

Bicycles were something familiar with Clara growing up. She recalled that her godfather owns one of the bike shops in her province and she would be gifted yearly with anything with wheels when she was younger: bikes, skateboards and scooters.

When she was studying in Ateneo, her family offered her a car. She refused because she’s not pleased with the thought of just one person consuming big road space. Instead, she requested to take the Japanese bike of her sister.

“Back in college, I lived in a dorm and it was inside the campus so I was never used to traffic. I had my bicycle in my third year, and I would bike if I needed to go to class. I enjoyed it before and I also didn’t like the idea that there are many cars, especially inside the campus during rush hour,” she said.

She experienced the hellish traffic of Manila when she got employed. Clara was residing in Quezon City and she used to commute daily to her work in Pasig. The graphic designer would take three modes of transportation and would spend two hours on the road every morning. Upon arriving at the office, she’s already tired.

When the traffic became unbearable, she decided to get a place in Ortigas where work is just a stone’s throw away. Her neighborhood had bike lanes already even before the pandemic so she would use her bicycle to groceries or do errands.

“My parents didn’t want me cycling in the city but what am I gonna do? I don’t want to get a car,” she said. Still, she believes that cars in cities take too much space and it’s ridiculous that people pay big amounts of money for parking.

In her own little ways, this graphic designer became a cycling advocate. When Life Cycles PH was looking for people to help out with its initiatives of putting up bike lanes in Metro Manila during the start of the pandemic, Clara volunteered to be an artist who’d make collateral materials for the group.

Working remotely in Cagayan, she’d make posters and designs for Life Cycles PH. That’s why when she went back to Metro Manila after being away for more than a year, she was glad to see bike lanes all over the metropolis.

“When I went to Manila last June, I couldn’t not bring my bike because I wanted to experience some of the things that we put up. Sobrang saya ko sa EDSA. Never ko naman na-experience mag-bike sa EDSA before noong wala pang bike lanes kasi parang it was always scary,” she said.

Cycling will always be for transport, Clara noted. People tell her that she can already get her own car but for this cyclist, it really doesn’t appeal to her. She said, “Biking is part of my life and I don’t want to succumb to a car. Maybe someday, but maybe not in the next five years. I’d rather just ride my bike.”

In La Union, she’d always go around with her Giant Escape she called “Joni.” It was named after her uncle, a cyclist, who recently passed away. It’s pleasing to bike in this province and it’s a bonus that she gets to cycle around with like-minded people.

Living in surftown has been amazing, she told us. However, she noted that it’s not the slow-paced life or the incredible sunsets that made her stay in La Union — it was the community.

“Rural life is something I’m used to, the beach was just added, which is great. But the number one reason why I stayed in La Union is the fact that I’d be roommates with creative individuals and the people around,” she said.

“I really enjoy what I do. I want to be happy and I want to reach my full creative self. I can only do that when I’m surrounded with people who I can talk ideas about, opinions and thoughts with.”