The family that bikes together in La Union

“Cycling is a way for us to envision doing positive things as a family together. Biking around our neighborhood is a normal thing for us.” 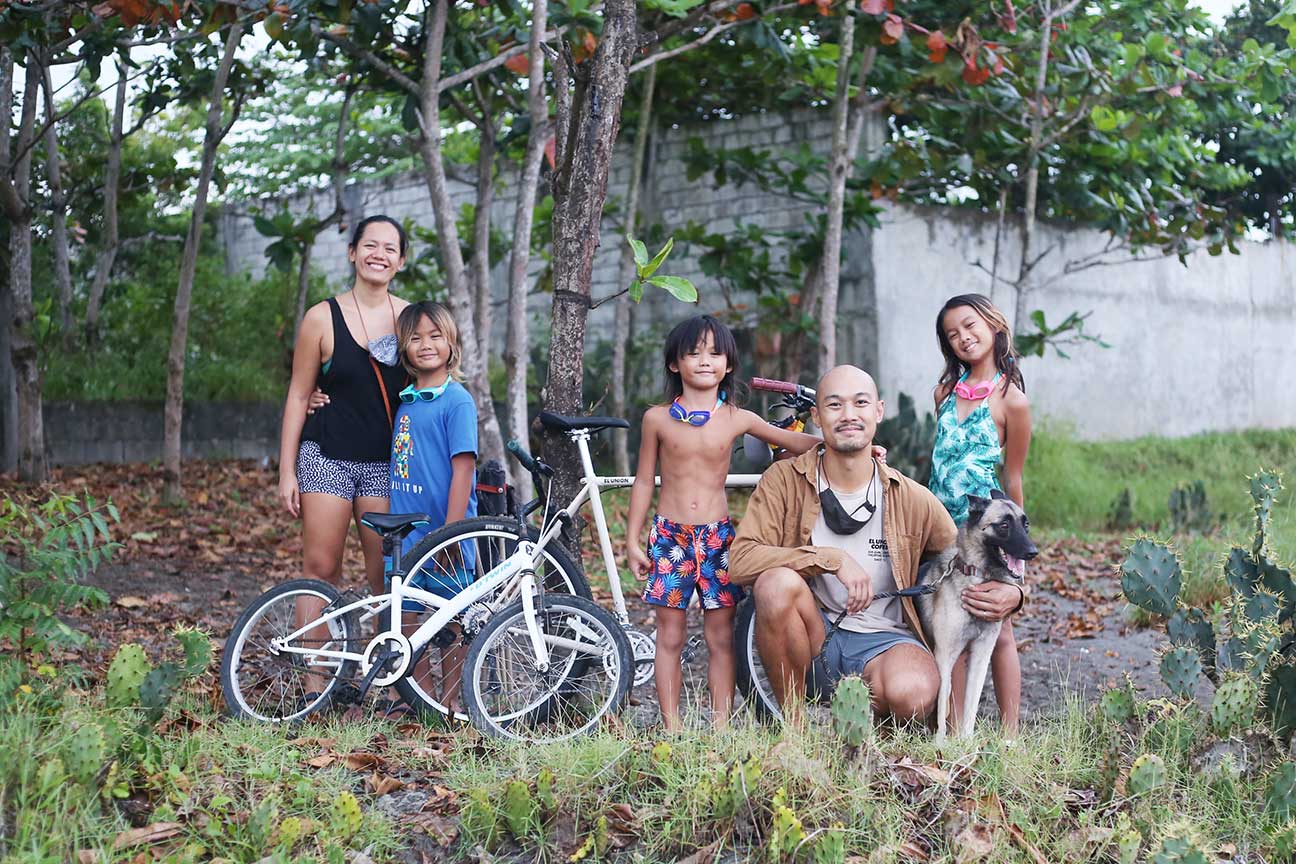 When we met Kiddo Cosio that sunny Monday afternoon at his charming coffee shop El Union, he was delighted to tell us that his children came to work with him that day riding their bicycles. The kids — Cadence, Dylan and Adam — showed us their bikes and mentioned that it was always fun cycling with their parents.

During sunset after his work, we visited Kiddo, his wife Amy and the kids at the beach near their house in Ili Norte. Their favorite spot is just a few meters from home and they would sometimes bring their bicycles. The young ones simply enjoy cycling in general, as well as the adult Cosios — even their dog Rufio likes to be tagged along on their bike rides.

“One of our goals, our values, dating even back when we got married, is at least to attempt progressive simplicity. Our life would be defined by trying to reduce our environmental impact and also being happy with less,” Kiddo said. “Cycling is a way for us to envision doing positive things as a family together. Biking around our neighborhood is a normal thing for us.”

The idea of including cycling as part of their family’s daily life started when Kiddo and Amy, together with their friends Mia Sebastian and Sly Samonte, travelled to the Nordic countries in 2018. The group was introduced to cities where humans and bicycles were prioritized over cars. They would always cycle, particularly in Amsterdam and Copenhagen, to get around and visit places.

As a kid, Kiddo always biked. He lived his childhood in Hong Kong and Singapore where he’d cycle to explore his neighborhood. His younger self would go out with his bicycle after lunch and be back home before dinner.

At the age of 12, he moved to the Philippines. One of the first things that his mom bought him here was a bicycle so he’d bike around New Manila during his teenage years.

“A friend of mine gave me an old 90s single-speed mountain bike and I would commute on that. I remember that biking was a core memory of my relationship with Amy because I would bike to buy her flowers at Farmer’s and I would drop it off to her,” Kiddo said. “We both got bikes too. We’d bike in UP Diliman with our friends who were into cycling as well.”

Perhaps this is the reason why it was easy for the couple to introduce biking to their children.

Even before the trip in Europe happened, Kiddo already started teaching his kids how to ride a bike. He got them a kiddie bike with no trainers and he removed the bottom bracket so there would be no pedals. The little ones had to familiarize themselves with the vehicle and cruising until it’s time for them to balance on a proper bicycle.

“The good thing is fun changes everything. If something is fun you don’t convince somebody,” he said. “They loved it from the start because they experienced it. And because the language of fun is so powerful, I think. It’s so pure in that sense.”

Kiddo noted that the kids have limits too when it comes to biking: they’re free to cycle in the neighborhood but they can’t go on the highway by themselves because they’re still small.

While La Union, most especially San Juan, can be relatively safer to cycle than most places in the Philippines like the cities in Metro Manila, there can still be room for improvement especially in terms of infrastructure and road design.

“I still remain quite concerned that infrastructure isn’t there yet but if we wait for it to be perfect, we’re never going to do it. We have to push back on those who decide on policy, those that decide on infra by starting already,” he told us. “If we wait for it, our life’s going to pass us by and we won’t enjoy this wonderful experience of being on two wheels with our kids.”

He added, “It’s our way of also making a statement. We’re going to bike on the road with our kids because it’s the better way to get around and it’s a quiet message and suggestion to those who are in power to think about their people, think about what’s important. Because biking is not just a silly hobby. It can be a way of life and it can be a better way of life.”

The philosophy that Kiddo and Amy follow in terms of educating their kids is to include them with what they do and to also involve themselves with what the children do. The parents’ goal is to make them better with cycling so they’ll be safer.

This dad noted that 10-year-old Cadence, the eldest daughter, is doing good because he saw how responsible she is on two wheels. Recently, Kiddo rode with Dylan, aged a year younger than his sister, to experience a longer loop so he could gain more cycling experience.

Amy told us that their youngest son Adam, who’s about to turn 7, shows more confidence in cycling now. She recalled that he had a fall during one of his first bike rides but it did not discourage him to continue biking.

Someday, the two would love to travel more with their kids, hoping that they’d get to do it on bicycles.

“As a family man, it’s about a vision of being able to travel together and see corners of the Philippines, maybe even other countries with my kids, and cover a lot of ground and experience it in a way because you see things on a bike and on foot that you don’t see when you’re in a car or a bus,” Kiddo said. “I think that a big part of our cycling story is envisioning a future where we can travel freely.”