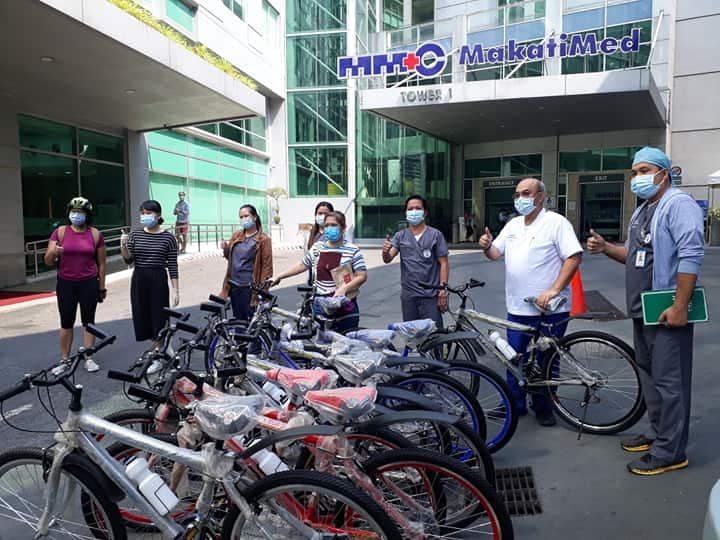 Like most of us, urban cyclist Keisha Mayuga was glued to the news back when the government was detailing the restrictions for the first Enhanced Community Quarantine in the country. She got mad, cried her disappointment out, when it was announced that there will be no mass transportation.

(I cried because how can people go home? Then when they said that those who do not have cars will just have to walk, I was so mad.)

That was really frustrating. For privileged individuals who have private vehicles, moving did not become a concern. But for the majority of Filipinos who rely on public transportation, it was a nightmare. For most of them who needed to go to work, they had to walk miles.

So when Keisha managed to compose herself, she immediately took action, publishing her ideas on social media and started messaging individuals to help people move. Right away, this cyclist thought that bicycles could help solve this problem.

(I randomly messaged people who are transport advocates and then it sprung into action. And then Life Cycles PH was born.)

Life Cycles PH is a social media movement that is divided into two. There’s a Facebook community group where Keisha’s team created a bicycle borrowing and lending mechanism. This managed to exchange around 400 units from individuals who had spare bikes lending it to frontliners who needed transport.

Meanwhile, the other part is a Facebook page that takes care of the donations. They buy brand new bikes and distribute them to frontliners. It grew fast and in a span of two and a half weeks, the help amounted to around 1.8 million pesos.

But everything was not easy. Logistics was so difficult because people were so afraid to go out and interact with others. Imagine helping people move but they themselves had struggles of moving.

(It was logistics versus urgency. There are so many things happening at the same time and the initial team was magnificent because everybody was working fast that everybody was so efficient.)

They were swift because many people can’t go to work. In less than a week, they managed to quickly deliver 32 bikes to frontliners in Pasig City. The team acted fast and worked hard to deliver as many bicycles to people to ease their transport burden.

Life Cycles PH inspired the whole nation, and perhaps started the general public’s consciousness of cycling as transport. Filipinos started realizing that bikes can move people. It also motivated others to do bike donation drives and individuals to realize that they can use their bicycles to go around.

“Very surprised ako na it reached more than a thousand bikes, I’m proud of what the team really did kasi we did this out of the goodness of our hearts. People gave their time, effort and a lot of people came through,” Keisha said.

(I was very surprised that it reached more than a thousand bikes. I’m proud of what the team really did because we did this out of the goodness of our hearts. People gave their time, effort and a lot of people came through.)

Keisha told us that today is the first birthday of Life Cycles PH, with a witty remark that it’s a Pisces. And if you believe in astrology, it is said that those who are born with this sign are generous and empathetic. It also happens to be Keisha’s birthday.

(I wish to see the bike lanes in full fruition. Protected bike lanes and to see people actually using it. It’s amazing to see a lot of new cyclists on the road, for me,I just want them protected or for the community to grow. That’s my birthday wish.)