Jayson was committed to starting his own business, no matter what. He told us that brewing coffee can wait because what’s important is that he gets to open his shop. 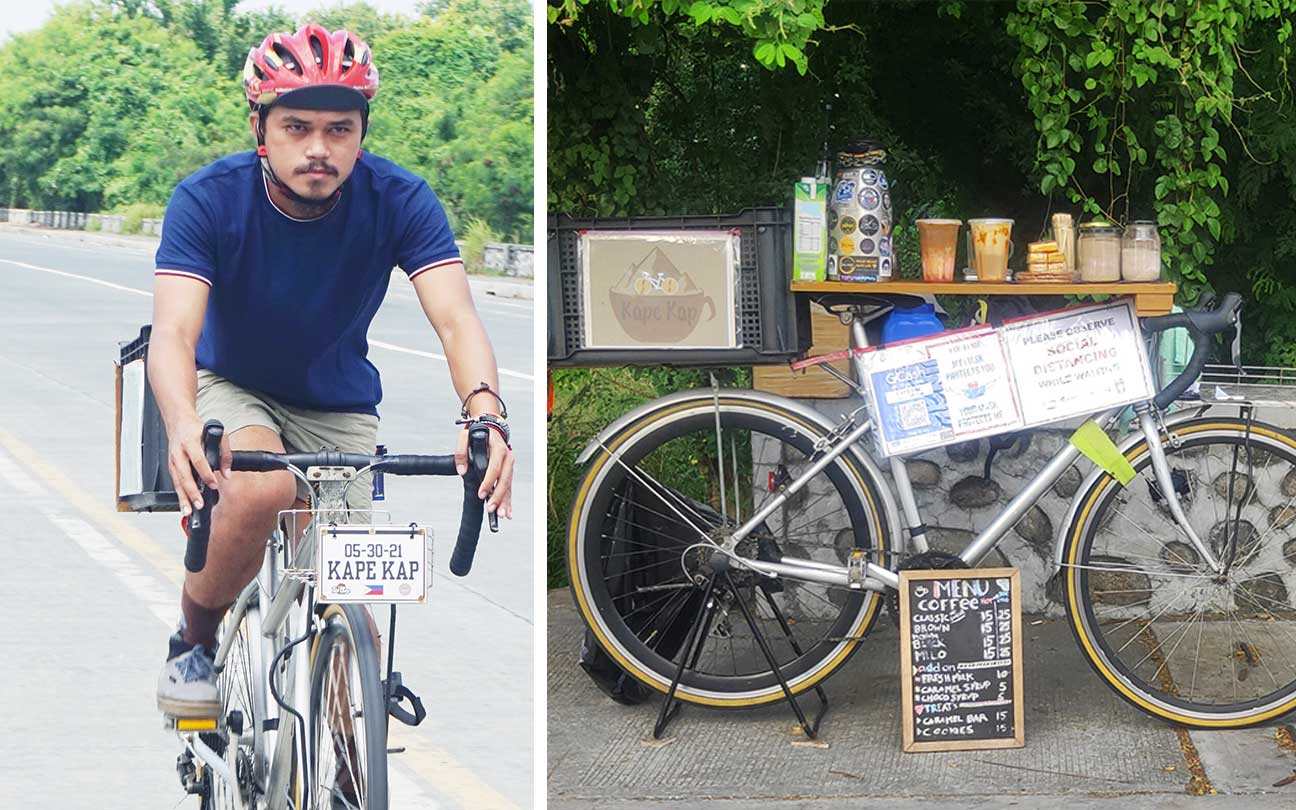 Jayson Cutamora dreams of owning a stable coffee shop someday — a roofed place where he can brew beans with an espresso machine, make pretty frappes and serve delicious desserts. However, he believes that it’s still far from reality so he’s just selling instant coffee using a bicycle for now.

A few days after Metro Manila was put under the community quarantine, Jayson got news that he’s getting laid off from work. He was just about to become a regular employee in a business processing outsourcing company in Pasay.

The pandemic is difficult, Jayson sighs. It’s just good that he was able to save money, something he used to survive 2020. Earlier this year, he thought of going back to his old call center life but the fear of acquiring the virus stopped him. Plus, the commute from his house in Cavite to Metro Manila was still punishing.

He did his research, watched a lot of Youtube tutorials and planned. While checking the equipment that he would need for a basic coffee business, he realized that the measly 1,500 pesos left from his savings would lead him nowhere.

Because he’s eager to start his business, Jayson approached his friend from church and sought help. Luckily, he got the support he needed and he was able to borrow money that he used to kick off the venture that he wanted.

But he was really determined to put up a coffee and bike business. He bought the equipment that he needed — a thermos, camping stove, frother, basket and a crate, among others. He borrowed other items too so he can maximize his capital.

Jayson was committed to starting his own business, no matter what. He told us that brewing coffee can wait because what’s important is that he gets to open his shop. Instant coffee is still coffee, anyway.

On May 30, he opened Kape Kap. He recalled, even though he got another cyclist to help him bring other items, that his bicycle was carrying almost 90 kilos and he felt the struggle. Nevertheless, Jayson was able to reach the bypass road, parked his shop on the gutter and started selling.

The 8oz hot black coffee is 15 pesos while the iced version, which is only available in 12 oz, is 25 pesos. There’s 3-in-1 too in his menu. Customers can add milk and other flavors like caramel and vanilla.

Aside from coffee, Jayson also sells pastries baked by some of his churchmates. His faith and the community that surrounded it are integral parts of his life. His friends from church call him “kapatid,” which became the inspiration for “Kape Kap.” Jayson doesn’t work every Sunday morning because it’s dedicated to worship.

This biker-turned-business owner is very thankful for his two-wheeled ride. The bicycle that he’s using for Kape Kap is the bike that his brother gave him when he was still studying in college. Jayson would use this for commutes and long rides.

Majority of his customers are cyclists too, he told us. We believe bikers simply love coffee — regardless if it’s from a homey cafe, a place with a view or a random stall on the streets selling 3-in-1.

Kape Kap usually sells his coffee along Medicion 2-F bypass road, also known as “Tokwahan,” in Imus, Cavite. He’s there daily from 6:30 am to 9:30am and 4:30pm to 7:30pm. There’s a high chance that you’ll not see him every Sunday morning.

He tells us that there are days when he goes home in the middle of work hours when the police and authorities halt trade activities along the bypass road due to overcrowding.

Special thanks to Rhett Campos for the photos and for pitching.