We’re glad to help Edmundo, even in our little way by giving him a helmet and saving him from the costs of getting apprehended by the police for not wearing one. 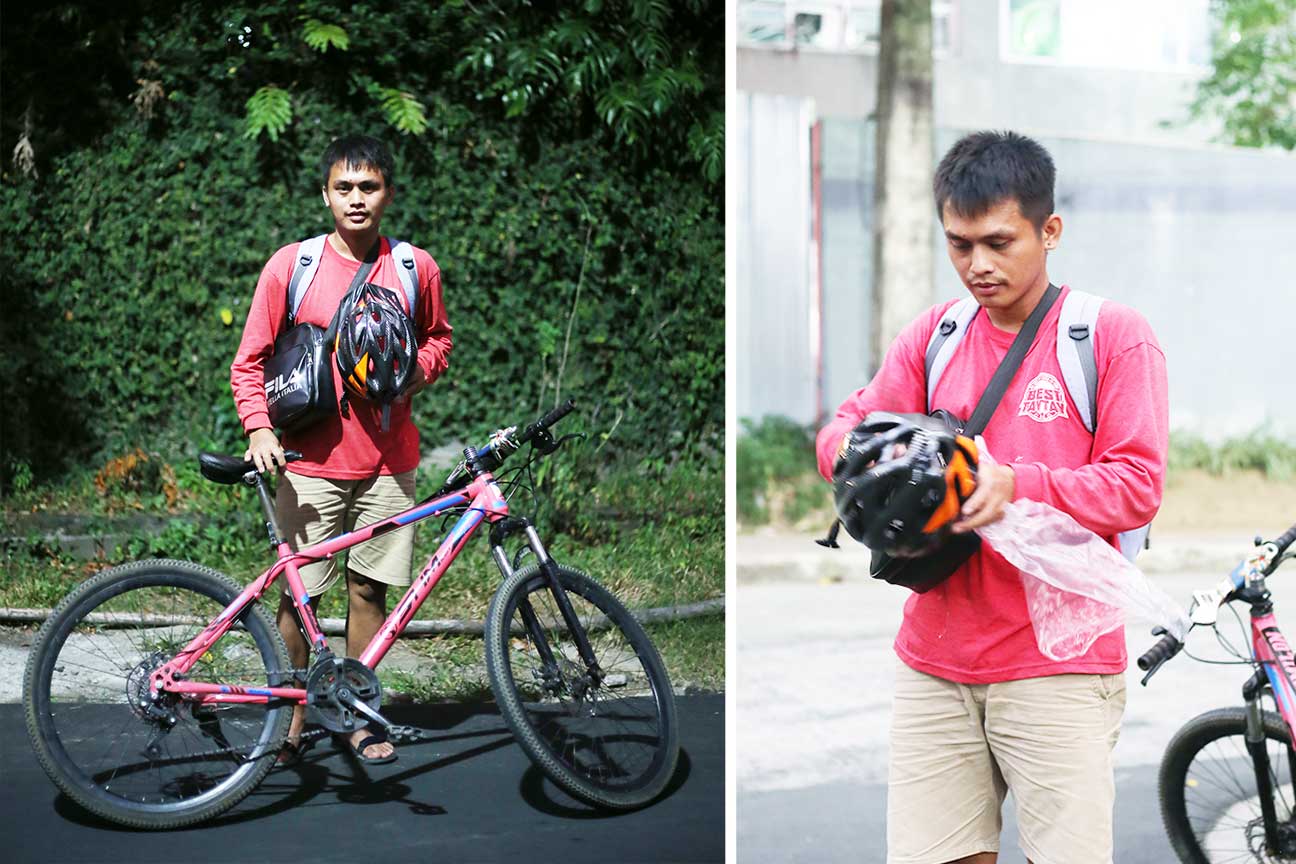 From Taytay to Quezon City, Edmundo Chavez spends 95 pesos for his fare. That’s 190 pesos for the day and he only gets 500 pesos for a day’s work as a construction worker. On top of transport expenses, he still needs to eat.

On his first day, three weeks ago, at his construction job in Quezon City, he tried commuting and said that it was hard — aside from it being expensive.

The money that Edmundo saves, he’s giving it to his mother who is suffering from Tuberculosis. He said that his mom budgets his money and they use it for their food and some expenses.

When we asked him, “what do you usually eat?” His reply was pretty heartbreaking.

When we met Edmundo, he was sitting on the gutter with his notebook. Apparently, he’s fixing the schedule of his Church’s next feeding program. For someone who doesn’t have that much, who can’t afford to give himself proper nutrients, it’s amazing that he still volunteers to feed others.

He is also waiting for his uncle that afternoon because he needs to borrow 95 pesos. It’s an emergency money that he’ll use just in case his bike gives up on him that day. He mentioned that his rear wheel sounded problematic and repair shops are already closed by night time.

But just in case, he has a wrench on his handlebar. A tool that’s not usually used by cyclists and that’s only good for one kind of bolt.

He used to work as a forklift operator before the pandemic but was forced to leave work because of the effect of the health crisis. He’s been jobless for two years — not because he was too lazy to work but it’s because it’s difficult to find work. It was thanks to his uncle who recommended him for this construction work in Quezon City.

He doesn’t have a helmet too, so we gave him one — something we collected from our earlier donation drive. Edmundo said that since he’s a new Quezon City worker, he’s not aware of the city’s bike helmet ordinance.

Edmundo is already 32 years old and he chose to live with his mom when he learned that she’s sick.

That day, Edmundo was wearing a pink sweatshirt. Before we said goodbye, he thanked us and was too proud to tell the story about what he’s wearing.

We’re glad to help Edmundo, even in our little way by giving him a helmet and saving him from the costs of getting apprehended by the police for not wearing one.

We wish we could have helped more but we randomly stumbled upon him and it was just coincidence that we brought an extra helmet just in case we saw someone on the road who would need one. We got his phone number to give more help soon.

First Bike Ride and The Curator is still raising funds to give helmets, bike lights and other safety gear to bike commuters who can’t afford to buy one. 100% profit of the Weekend Slushies of The Curator for the month of February will be donated to the fundraiser.