From Metro Manila to Europe: the couple who continues to bike

They both met through dating app Bumble. Back then, Keisha Mayuga was already a cycling advocate while Glo Guevarra already believed in biking as a form of transport. 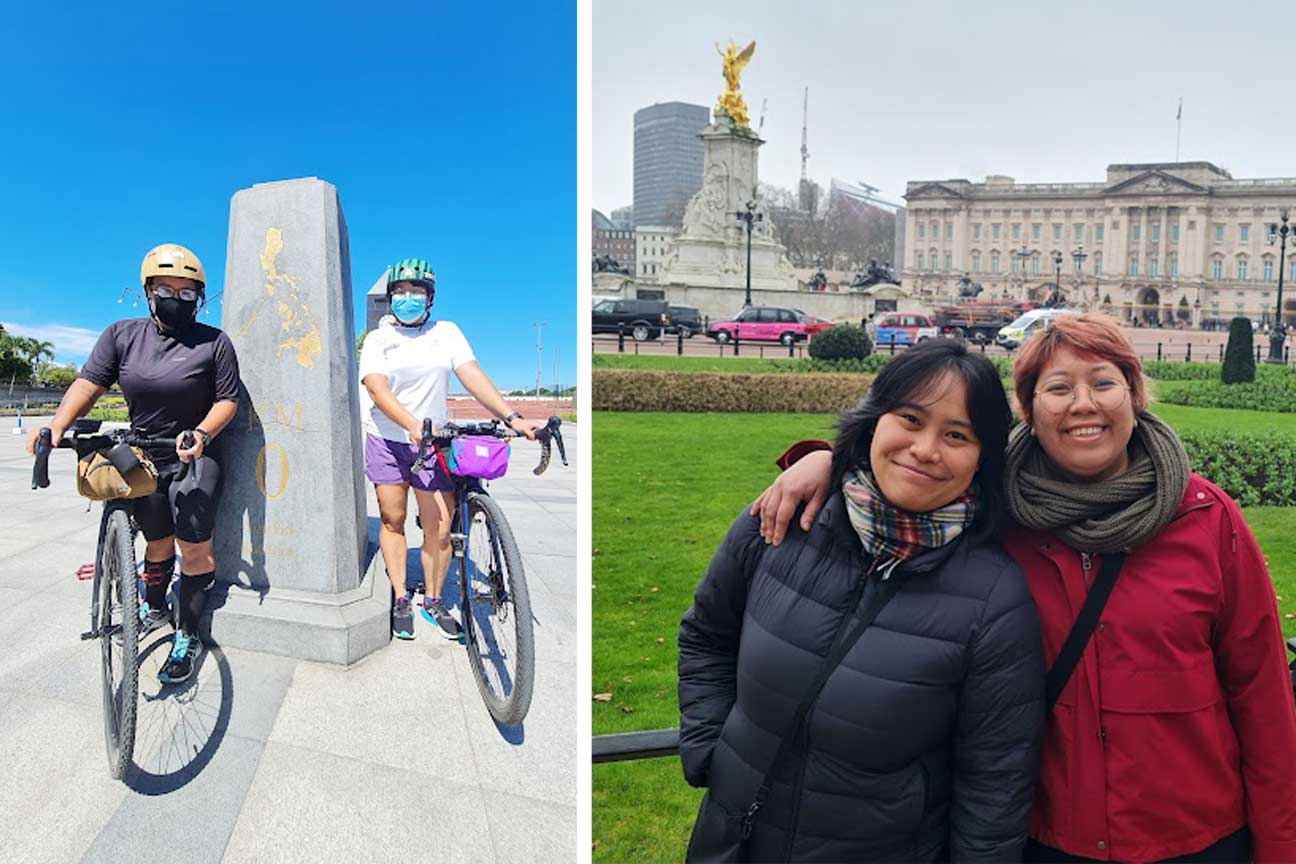 She was on her right side, cycling along Daang Hari, with the sun beautifully setting beside them. That moment, it hit Keisha. She’s finally in love with Glo.

“May fields and sunset noon, so nasa right side ko siya and I’m biking beside her. Tapos tiningnan ko lang siya na ‘Wow, I love her!’ Tapos may sunset effect and everything,” Keisha Mayuga said.

It was a day in December 2019, Keisha told Glo Guevarra that she’s riding a bike home from Pasig to Bacoor in Cavite. The latter said she needs to be in Paranaque and it would be nice if they could cycle together.

It was Glo’s first time biking to the south. Moreover, it was her first time cycling more than ten kilometers.

Keisha has tried biking all the way from Metro Manila to Cavite while Glo’s longest ride that time was from Ortigas to Makati, which was just an easy seven kilometers.

They both met through dating app Bumble. Back then, Keisha was already a cycling advocate while Glo already believed in biking as a form of transport. The pair met at Cubao Expo for the first time — Keisha riding her bike from Diliman and Glo hailing an Angkas motorbike from Ortigas. Interestingly, after that date, they both thought that they might not hit it off as a couple.

Their communication continued though, with Glo trying to impress her new friend with casual bike posts on social media. Since she learned about Keisha’s cycling advocacy and her passion in helping make public transport better in the Philippines, she also tried to connect the advocate with important people in transportation and linked her to speaking engagements.

Glo called this “strategic landi” and apparently, it worked.

“’Yun ‘yung parang strategy ko and I want to be supportive. I sound like a scheming person pero it’s like hitting two birds with one stone. If it works out, great. If hindi, at least may natulungan ako na mabigyan ng platform,” Glo said.

“All throughout, even with Life Cycles, Glo has been my number one support. Especially during the pandemic because it was so hard,” Keisha said.

Life Cycles is Keisha’s endeavor during the early days of the community quarantine as her way of helping people move after public transport was halted by the government. She led this program that gave bicycles to people who can’t travel to work.

These love birds would always bike. Whenever they meet friends or go to work, they’ll be using their bicycles. Even during the time when they busked in Ortigas one afternoon, they also brought their two-wheeled rides.

“Cycling was our main mode of transport. For example, we’re supposed to go to a certain place, we didn’t even have to ask how we’re going to get there. We ask ‘what route are we taking?’,” Glo said. “It was also one of the most important things that we shared with other cyclists.”

“I absolutely love that cycling brought people together, especially during the pandemic. Especially as an adult, it’s so hard to make friends,” Keisha said. “Another wonderful thing about our relationship is that we don’t box people out. Whatever we do, we love doing it with other people. We love cycling with other people.”

Their most memorable bike ride was going to La Mesa Dam in Quezon City. Keisha has always wanted to go there and she invited Glo in January last year. They knew that it’s going to be a long ride — around 80 kilometers roundtrip — but they didn’t expect that it would be difficult, especially the rolling areas of Commonwealth.

Glo had thoughts of backing out but she still pushed through. They arrived at La Mesa Dam at eleven in the morning and they were welcomed by the guard saying the park is already closed. Keisha just sat down and cried.

Well, they managed and got home before midnight. And mind you, they even went to Makati to meet friends after all those stressful mishaps.

Towards the end of 2021, Keisha and Glo left the Philippines to pursue postgraduate studies in Europe. Keisha is now living in Berlin while Glo is in London.

“We’ve been living together for two years and this is the longest that we’re not together physically. It’s hard but it’s necessary for us to grow in our own spaces and bike in our cities and discover the cities in our own ways,” Keisha said.

They feel lucky that they live in the same region. In fact, Keisha visited Glo last December in London.

“I’m happy when Keisha finally got here and cycled in London. That was amazing, that was wonderful, that was one of the best things ever. And then there’s this expectation and excitement that one day, I’ll be able to do it with Keisha in Berlin,” Glo said.

They told us how great it was cycling in Berlin and London: that cyclists are respected, bike infrastructure is good, there are many bike racks, political support is present and that the driving culture is so different from what we have here in the Philippines.

Keisha believes that the Philippines can achieve the biking culture that Europe is having. She noted that we can learn from European cities but at the same time adjust based on our own context.

As we ended our conversation, we asked Glo what was the “sunset” moment for her — the time when she realized that she’s already in love with Keisha.

“For me, it was when she told me about what motivated her to get into transport in the first place. Whenever she would see lines in the bus stops and at MRT stations, she would feel a sense of empathy for them,” Glo said. “’Yun for me was ‘wow, this person does not just think about herself. Gusto niya makatulong sa mga Filipinos.’ And everytime I think about it, I still feel emotional.”

She added, “Get you a partner who cares about society and cares about other people. You can already surmise na maganda ‘yung puso nila when they themselves have the desire to make the world better. ‘Yun ‘yung sunset ko.”