It’s hard to take pictures of someone cycling and it’s even more difficult to have two people with bikes in one frame. Ron Contreras and Lalaine Abella give us tips on how to photograph couples with bicycles. 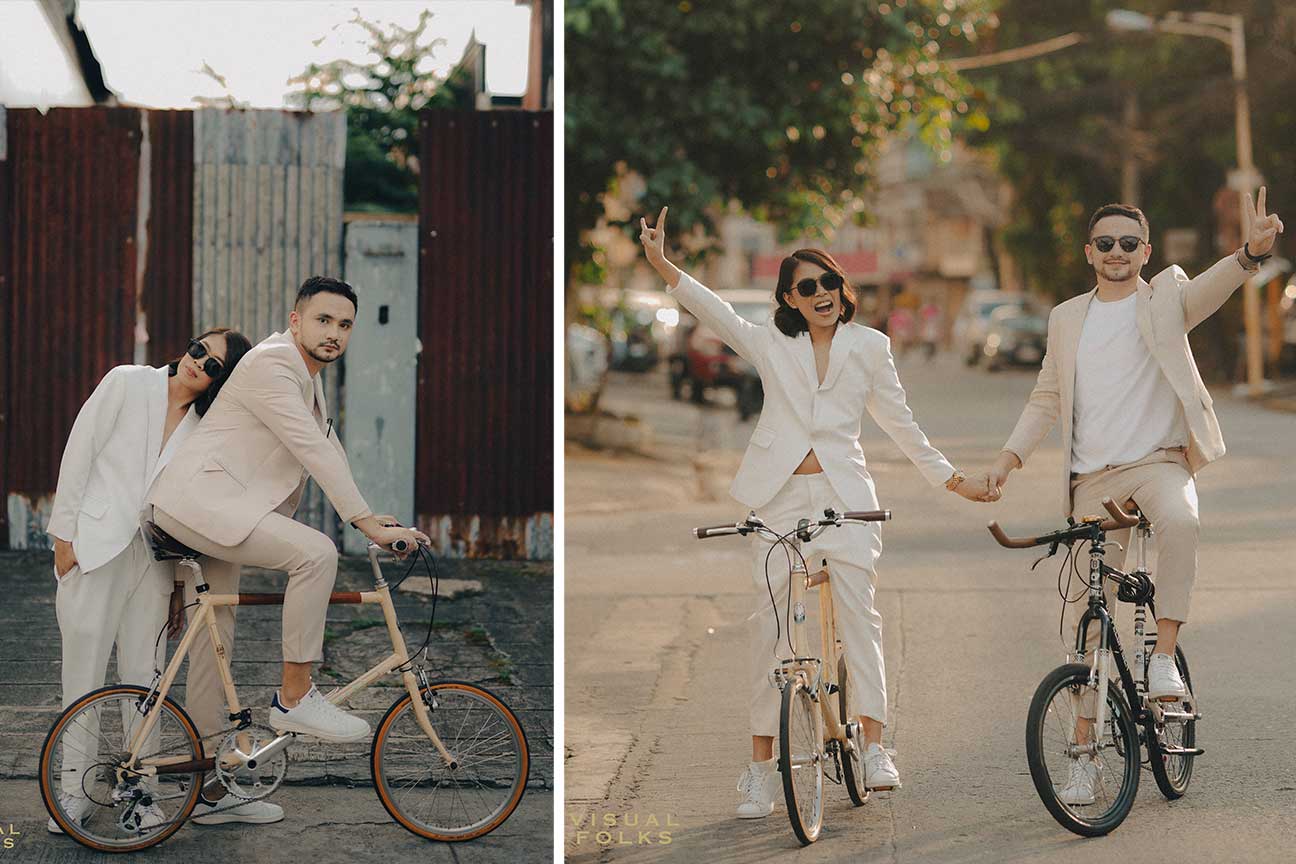 Visual Folks, a wedding photography company, recently uploaded a set of prenup pictures of a lovely couple with bicycles. The photos, taken by Ron Contreras and Lalaine Abella, are beautiful, chic and they really capture the personality of the engaged pair.

Ry and Zelle, the subjects of Ron’s photographs, own the small coffee shop in Makati called “Kohi.” Aside from their fondness for biking, their store is also frequented by cyclists — perhaps that’s why bicycles are something special for these love birds.

The outcome looked great and the couple seemed to have a nice time during the shoot. But we have to admit, it’s hard to take pictures of someone cycling and it’s even more difficult to have two people with bikes in one frame.

We asked Ron and Lalaine, people who also love biking, to give us some tips in shooting a couple’s prenup with bicycles. Here’s what he said:

Aside from a photogenic outdoor place, you should consider a space where there are no obstructions like a crowd, vehicles, humps or road cracks. The safety of your subjects is one of the main concerns of the shoot. It’s also difficult if you get to be interrupted by unwanted objects on your frame.

2. The best bicycle shots are when it’s moving and when you see the bike’s whole body

When the couple is riding, make sure that someone gets to be a few meters ahead. Speed should be moderate and the two subjects should have the same pace. Ron also noted that it’s always good if the bike is seen from the side because the bicycle’s form is very photogenic.

3. Make sure that the pair knows how to ride a bike

Many couples would request photographers to use a bike on their prenups as props and they believe that it’s more awesome and interesting in pictures if they get to ride it. However, he notes that if someone doesn’t know how to cycle, it really shows in the photos.

4. Match the couple’s attire with the look of the bike

The photographer recalled that they were supposed to shoot with more adventurous-looking bicycles. But since they wanted to achieve dapper images, they ended up using a black and flesh mini velos that matched the couple’s outfit. Consider close up shots of the bike if it looks gorgeous on cam.

5. Let the couple bike around the location first

This will familiarize the couple with the space that they’ll bike during the shoot. Instead of always looking out for possible obstacles, the pair can focus more on cycling and on the photographer’s cues.

6. There will be a lot of takes and sweat

Of course, the couple is exerting physical effort so sweat is expected. A few make-up retouches might also be present in between shots. According to them, the couple spent a good 30 to 45 minutes with the bicycles to produce the beautiful pictures.

Since you have the bicycle as a props, being too cheesy on cam might not work best. He said that poses of tight hugs, kissing while biking (while it’s dangerous) and overly romantic jumpshots could look unnatural.

8. Don’t forget the fundamentals of photography

This lies on the hands of the photographer. While everyone enjoys the shoot, be mindful to consider the lighting, composition and direction to achieve visually-pleasing photographs.

9. Among all things, everyone should enjoy

Biking is definitely fun and it’s more delightful when you get to capture cycling moments. Indeed, the bicycle is very photogenic and is a really great addition in pictorials.

Visual Folks offers wedding photography services. Contact them through their social media channels for your needs.