"I’m happy that the communities that I’m in right now, two of the things I love which are LGBT advocacy and mobility, have parallels and celebrate diversity more than anything else." 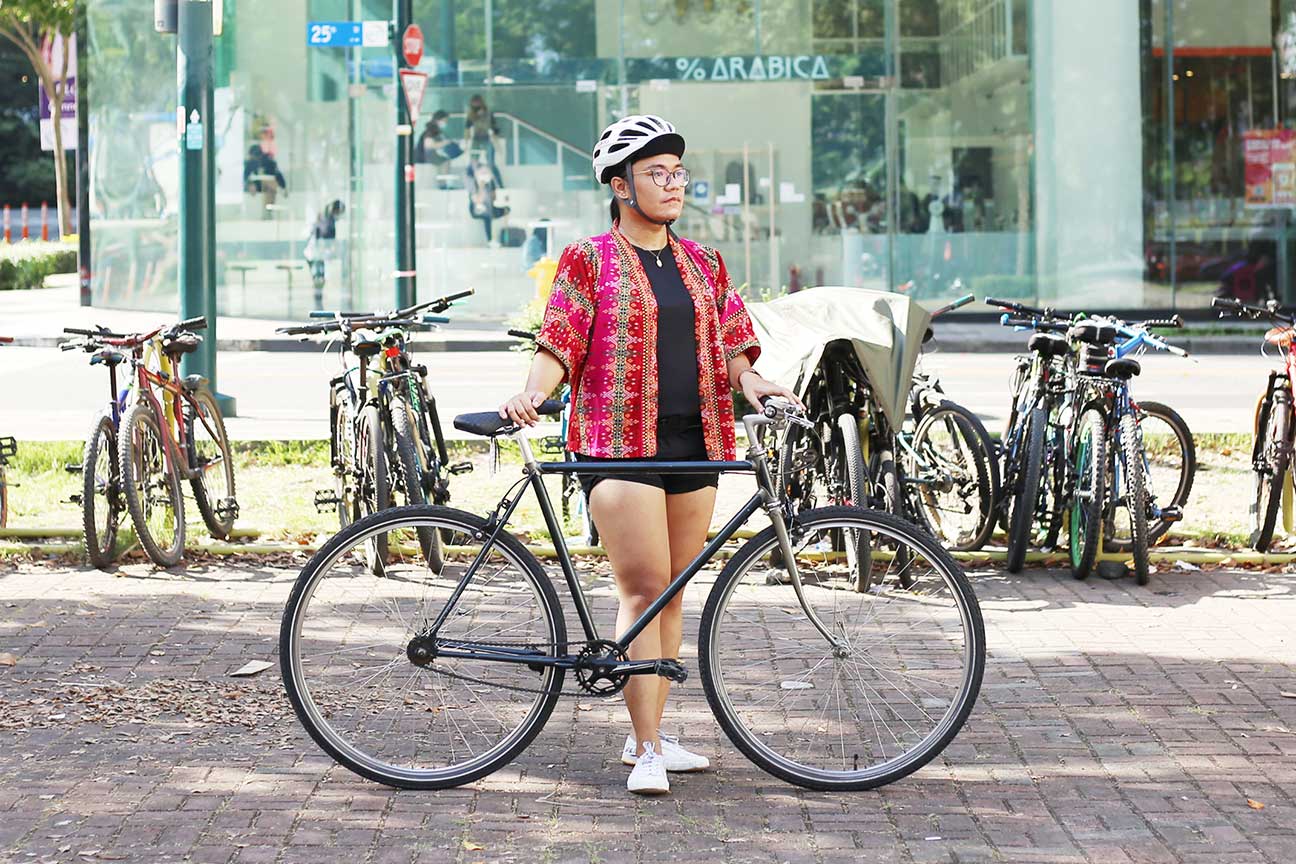 She arrived in the empty lot located at the corner of Bonifacio Global City’s 25th Street and 7th avenue with a vibrant pink blazer with indigenous prints and her black single-speed bicycle.

It’s quite a contrast, with many elements present in her look that day — the solid and simple black bicycle with her vivid patterned outfit. But it’s probably a manifestation of how our interview would turn out.

Under the shade just near the bike rack that inspired the Instagram bike page @arabicakes, we talked about cycling and her advocacy in the LGBT community as a transgender woman. She told us that she’s pleased that both of the things that she’s passionate about are aligned in terms of diversity.

“I’m happy that the communities that I’m in right now, two of the things I love which are LGBT advocacy and mobility, have parallels and celebrate diversity more than anything else,” Thysz told us. “Right now, more people realize the diversity of biking. That there’s no right bike. Anything that can bring you from point A to point B is all right. Whatever it is, it’s a bike and that’s it.”

She added, “It’s the same as being a member of the LGBT community. You accept that human gender and sexuality are diverse, that there will be people that will be different from you. But for as long as this person is not hurting anybody, then there’s nothing to fear.”

Where we were hanging out, the nearby bike rack held different kinds of bicycles: from expensive gravel bikes, worn out two-wheeled rides used for commuting to high-performance road bikes. It’s also worth mentioning that we’re in front of three stores that serve coffee that targets varying markets from various socio-economic classes.

But when cyclists gather near the bike rack, people confidently converse and interact with each other — whoever you are, whatever gender you belong to and the bike you ride. This is something remarkable to Thysz, unlike before when she was cycling alone during the first year of the community quarantine.

“Since July or August, ang una kong napansin when people started hanging out in this area is sobrang okay ‘yung pagka-halo-halo. Meron kasing mga tambayan ng bike na parang exclusive lang,” she said. “Ang dami naging magka-kaibigan dito kahit may diversity. Whatever is true for you in cycling is all right as long as you are having fun, you’re safe and you’re not hurting anybody. Doon pa lang na acceptance, gustong-gusto ko na.”

(Since July or August, the first thing that I noticed when people started hanging out in this area is the good mix of the crowd. There are other hangout places that seem exclusive. There are many people who became friends here because of diversity.Whatever is true for you in cycling is all right as long as you are having fun, you’re safe and you’re not hurting anybody. I already like the thought of acceptance.)

She got her own bicycle in 2020 because she wanted to move better with efficiency. She doesn’t own a car and public transport was difficult back then. She likes walking, she noted, but it’s just difficult when you need to go far.

Her first bike was a road bike that she bought from Quiapo. It was fun even though she’s always biking alone, the advocate recalled. Unfortunately, at the end of the year, she figured in an accident when she slipped while passing along a wet metal sheet in the pavement of JP Rizal.

The left part of her body hit the pavement and she thought that she’d be hit by moving vehicles because she couldn’t get up immediately and move.

(It took until 2021, around July after I was fully vaccinated, so I biked again because I got the Brompton. I don’t use the road bike anymore because I was traumatized.)

And now, she’s not alone in cycling anymore. Thysz found bike friends that accompany her to fun adventures around the city and even outside the metropolis. She’s been to Muntinlupa, Marikina and even Bulacan.

(I got more confident because I got companions, people I met in Arabicakes. Before I bike solo. It’s encouraging. I feel stronger because I want to pace with them and I learn from them.)

Despite finding fun in cycling, it’s still not perfect. We did the interview during the time when the campaign about ending violence against women was ongoing and she recalled experiences of getting harassed on the road as a trans woman.

A trans woman is still a woman. Trangender women are persons who transitioned from male to female.

Thysz explained that a trans woman is a kind of being a woman — it’s a matter of gender identity and is different from anatomical sex (male and female).

The activist said that she has experienced heckling and catcalling on the road. One common example is people calling her degrading and condescending names especially when she calls out drivers who invade her space and those who almost hit her on the road.

“Biglang out of the blue may sisigaw sa iyo ng ‘bakla.’ It’s worse because they use the word “bakla” to demean somebody,” she recalled.

(Out of the blue, someone will shout “bakla.”)

Well, aside from those harassments mentioned, trans women have been subject to other forms of violence too. They get discriminated against, assaulted, threatened and some are even killed.

Nevertheless, Thysz still continues to fight for their rights. She’s happy though that she’s living in a lifetime where transwomen are more accepted by the society. However, there’s still a lot of work to be done.

“Nai-initindihan ko naman ‘yung sa ibang tao lalo na if ‘yung upbringing is super conservative. But I’m sad for them na they can’t move forward understanding that people like me exists,” she said. “I’m happy to live in a time na it’s becoming better. I’m hoping that through how I’ve advocated the rights of transwomen, the lives of younger trans individuals will become better.”

(I understand other people, especially when their upbringing is super conservative.)