The plan: from Cubao, we’ll go to Kapitolyo in Pasig, cross the Kalayaan bridge and have coffee in Bonifacio Global City. After that, we’ll head back to our starting point. 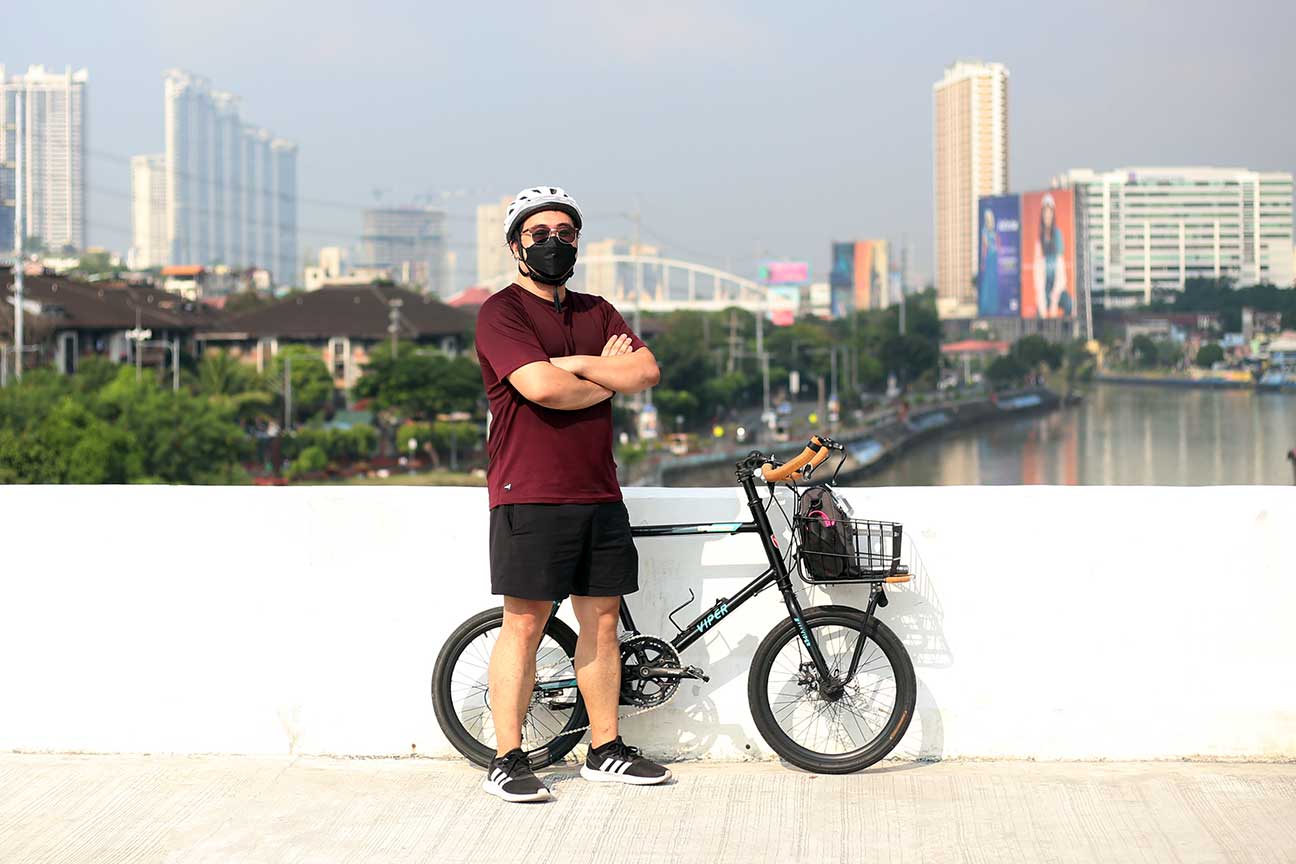 It’s been more than two years since Angelo Javier bought his mini velo. The main purpose of his bicycle is to easily go to places when running an errand during the beginning of the lockdown, back when mobility is terribly challenging.

Now, even if things got a bit better, his mini velo is still serving its purpose. Javs, as what people usually call him, bikes to the market up to this time to buy supplies for his family. Add to that, he gets to ride it around his neighborhood in Cubao to relax when things get stressful at work.

For the longest time, he really wants to try cycling outside Quezon City. He’s just afraid of trying it alone.

He’s the barista of Daily., a small coffee business. Javs has been exposed with many cyclists because bikers from different parts of Metro Manila usually flock to their monthly pop-ups. And there was a time when he told us that he wants to do longer cycling than just biking for errands, just like some of their regular customers.

When he told us that he was ready, we accompanied Javs on his first bike ride outside Quezon City. The plan: from Cubao, we’ll go to Kapitolyo in Pasig, cross the Kalayaan bridge and have coffee in Bonifacio Global City (BGC). After that, we’ll head back to our starting point.

Everything’s going smoothly at the beginning. When we reached Kalayaan Extension and Temple Drive, exhaustion started to hit the beginner. He admitted that he went all out during the first few kilometers — he probably felt excited.

After a few minutes of rest, we continued until we faced the biggest challenge of the route: Ortigas Avenue uphill going to Meralco Avenue. Needless to say, this stretch is so difficult that even experienced cyclists still get exhausted cycling this incline.

There’s no shame in walking and Javs decided that it’s best to get off the saddle and push the bike going up.

It was definitely a refreshing scene. Javs has finally biked inside continuous bike lanes when he entered Pasig, though mostly painted. There are bike lanes in Cubao but they’re quite terrible.

After taking some pictures and crossing the Kalayaan bridge, Javs was welcomed by protected bike lanes that’s the same size as a car lane. It was easy to bike there, he said, and he felt secure. We arrived in BGC, a place where bike infrastructure can be pretty impressive compared with other cities in Metro Manila.

To recharge and get ready for the trip back home, we had lunch and coffee in BGC’s open spaces. We took this time to tell him about our observations and gave him tips of how he can improve his cycling: we adjusted the height of his seat, we told him about gearing and gave strategies when traversing fast traffic.

On the second half of the trip, Javs faced the challenging Brixton climb in Pasig. We had to stop a few times to take a break. We continued and cycled along EDSA since it has protected bike lanes and because it’s mostly flat.

This is why proper bicycle infrastructure is important. Those who can confidently bike can navigate easily even with the absence of the bollards and paint but it’s mostly helpful to those who are inexperienced.

Towards the end of our trip, around 500 meters before the finish line, Javs experienced cramps. He was so frustrated but was so determined to finish the challenge without getting lifted by a car. Even though he was in pain, he continued after resting for a few minutes.

The whole trip totaled 30 kilometers, the longest that Javs have been on a bicycle. He said that he was happy but acknowledged that he still needed more practice and that he still can’t cross major roads and go to other cities by bike alone.

But he’s hopeful. One of his main motivations is that he wants to bike with his girlfriend with much confidence on bigger roads someday. They cycle around their neighborhood but haven’t tried going far.

We asked Javs: what’s the biggest takeaway from this trip?