For those who would like to avail the drive-thru service of Manila, an appointment through Manila Emergency Operations Center should be secured. 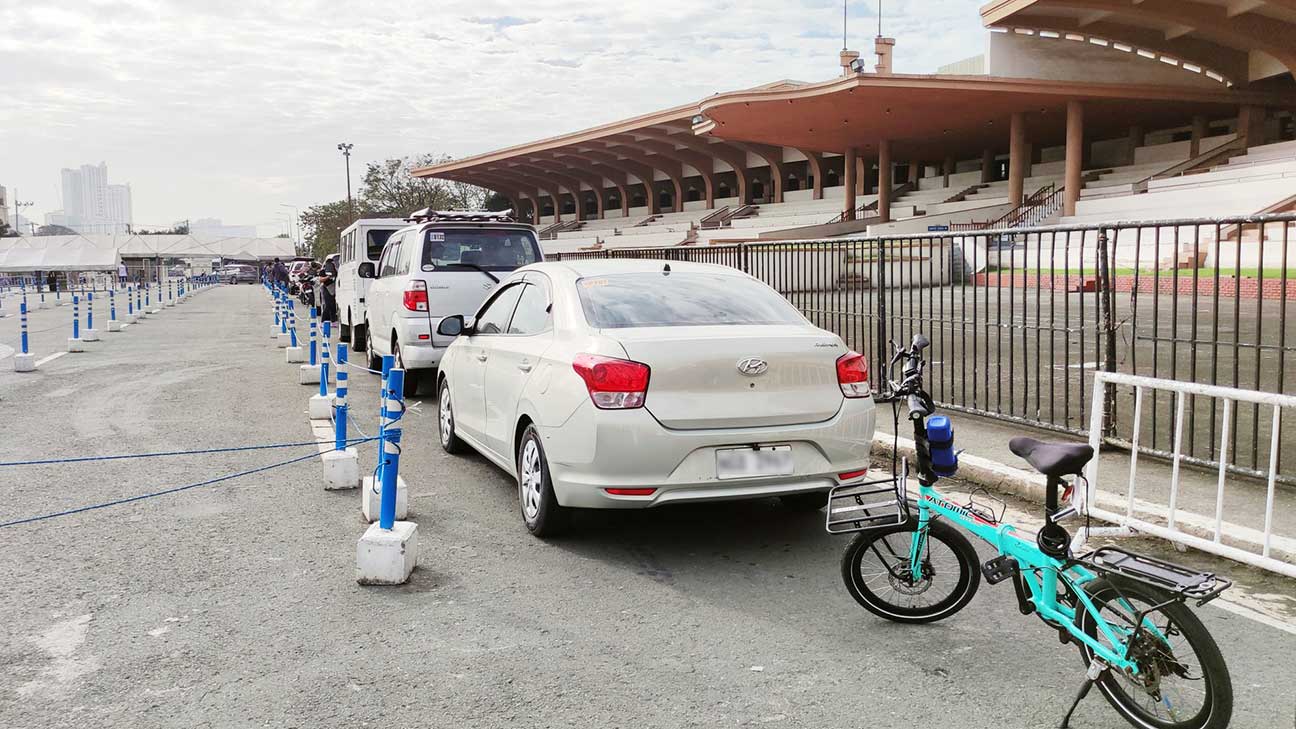 Chin Leobrera arrived today at the Quirino Grandstand’s drive-thru Covid-19 testing facility with her bicycle to get a free RT PCR test.

Local government units (LGU) have been operating free Covid-19 testing facilities — through barangays, malls and mobile centers, among others. There are some cities that have drive-thru stations too that seemed to be exclusive for motorized vehicles.

However, Chin’s experience demonstrated that Manila’s testing facility in Quirino Grandstand is not exclusive for cars. According to her, it also accepted people who came using bicycles, pedicabs and trikes.

She came after learning from workmate Benedict Bien that they can get their swab tests in this facility. Both of them who fell in line for two hours.

For those who would like to avail the drive-thru service of Manila, an appointment through Manila Emergency Operations Center should be secured. You can do this by calling their hotlines (see photo below) where your personal information and vaccination details will be asked.

Chin called to book an appointment on January 4. Please take note that due to the volume of people wanting for a swab test, it might take time to get in the line. Arriving onsite without a schedule is not allowed.

“Park your bike or vehicle in line and request for a PhilHealth form at the desk, beside the swabbing area. Fill it out while waiting,” Chin told us when we asked about the testing process. “Health workers at the desk will check your documents to make sure it’s complete. Once verified, they’ll let you proceed to the next desk where another staff will take a picture of the details and then they’ll swab you.”

You need to bring one valid ID with two photocopies of it. A PhilHealth ID is optional.

Chin advised that bringing an umbrella and water can be helpful because it might get too hot waiting under the sun. She also mentioned that car drivers would not turn their engines off while idly waiting in line.

Manila residents are prioritized but if you don’t live here but wish to get a free swab from this LGU, please verify if you can avail the service upon booking an appointment.

A few hours after Chin’s swab test, she received a message from Manila Public Information Office (PIO) via Facebook messenger that bicycles and tricyles are not allowed in the Quirino Grandstant testing facility and that “four wheels” are only permitted.

But when Chin replied and said that she was successfully swabbed earlier and that she brought a bike, Manila PIO said, “In anticipation of a bad weather po, we highly encourage po na closed yung vehicle.”

We asked Chin why she was allowed today to fall in line with a bicycle. She answered, “We’re really not sure. No one from the attendants ever mentioned that bikes, pedicabs, or tricycles are not allowed so we just happily went with it.”

We called Taguig City to ask if bicycles are allowed to fall in line in its free drive-thru testing centers and they told us that it’s not allowed.

With the rising number of cases, alarming reports of many people getting sick and requirement of Covid-19 test results for necessary activities such as work and hospital appointments, it’s such a relief to know that free testing is happening around Metro Manila.

It’s good to know that Chin was able to fall in line with her bicycle today. She told us that she thought of hailing a car using an app but she’s glad that she just used her two-wheeled ride.

Majority of Filipinos don’t own a motorized vehicle. According to the latest SWS survey, there are more bike owners in the Philippines than those who possess cars.