We replaced the deteriorating bicycle of this hardworking security guard with a brand new mountain bike. 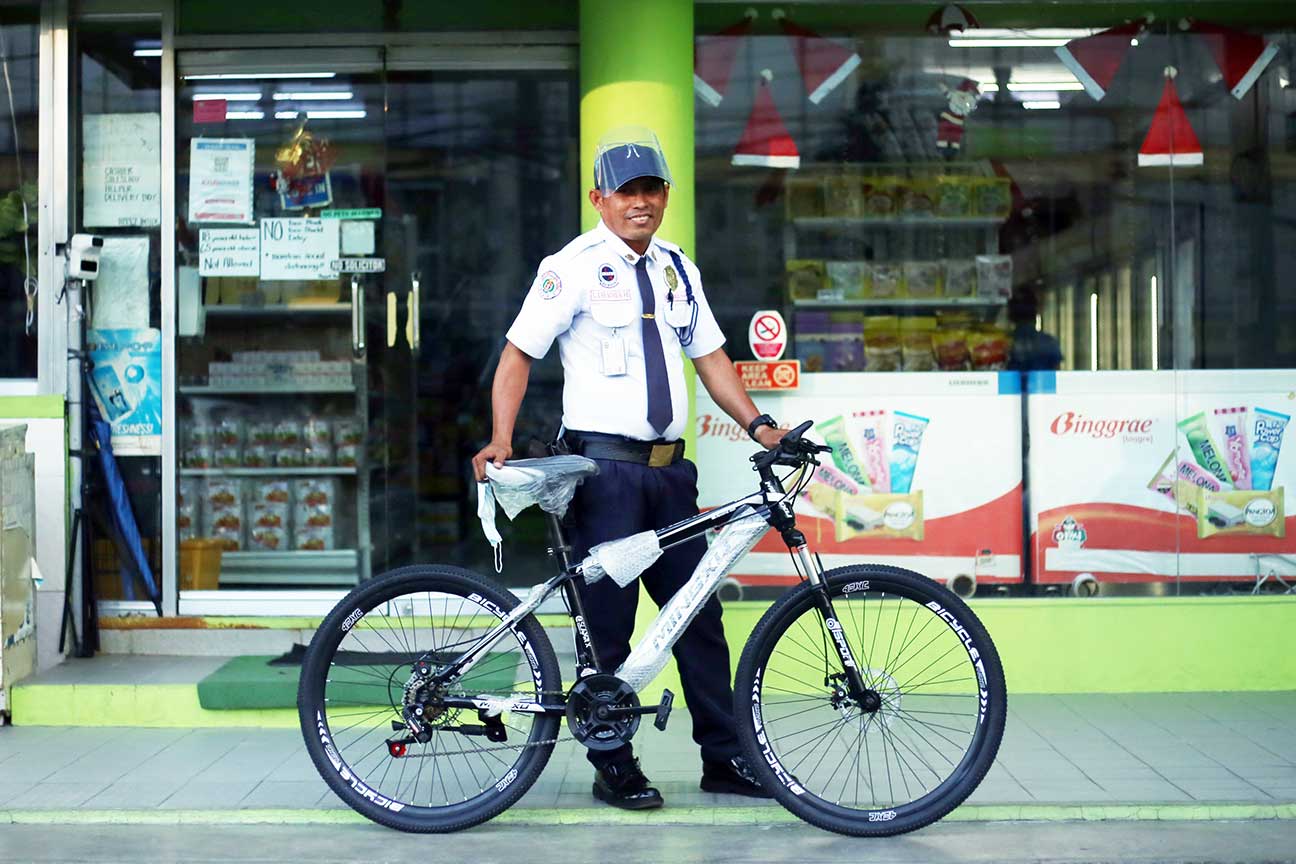 Felix Labisotes struggles daily going to work because his bicycle is in a very bad condition — the rear derailleur doesn’t work, the brakes are faulty, some parts are rusty and the spokes will give up anytime soon.

Last year when we visited the shop to buy Korean goods, we noticed his vehicle and asked questions about it. It’s an old mountain bike he bought at a junk shop for 3,000 pesos. He told us that there are problems but it’s still rolling.

As much as this biker wants to have them fixed properly or have a bike replacement, he’d rather spend his money on his family’s needs.

The bicycle that Felix received is part of First Bike Ride’s bicycle donation drive. Generous individuals donated money and bicycles and we helped in distributing them to deserving individuals.

Even before the pandemic, Felix was already bike commuting. His dilapidated bicycle has been with him for six years. He said that it’s better to cycle than use public transport because he’d rather save money and pedal than pay for the fare. This guard values even a single peso — he’s very thankful for the customer’s tips, even if they are just a few coins.

He works six days a week from 7am to 7pm. Sometimes, he’d take the 24-hour shift. It can be hard, he told us, and he can’t have time for himself anymore — not even for upgrading his vehicle or even buying nice clothes. But he needed the job for his family. Despite all of the hardships, everyone in the Korean mart can see that he’s happy whenever he’s at work.

There are no bike racks in this grocery store but Felix always offer to look after the customers’ bicycles. He’ll park their two-wheeled rides near his station, beside his MTB, and will make sure that they are safe.

He’s very helpful too. There are times when customers forget their face shields, a ridiculous government-imposed requirement to anyone entering an indoor business establishment, and Felix would volunteer to buy items for them since they can’t enter.

The security guard can be a good companion too. One time, we were waiting for friends outside the store and he’d ask about our bikes and praise them. Perhaps this is him enjoying better bicycles, something that he can’t afford for himself.

He used to live near Commonwealth Avenue before, cycling four hours daily. This year, he managed to move nearby, just a few kilometers from the Korean mart, and rented a small room for him, his wife and their 3-year-old child.

Now that he has a new mountain bike, he plans to give his old bicycle to his nephew who wants to practice biking for commuting.

When people around the area learned that Felix got the new bike, everyone gathered to check the bicycle. Since most of it has stock parts, one passerby who said that he’s fond of doing long rides approached and gave unsolicited advice to Felix about upgrades. The guy said that he had his chain ring changed for 7,000 pesos and told him that he can change other parts like pedals and cogs.

When the guy left, Felix told us, “Hindi ko alam mga sinsasabi niya, wala akong budget doon at hindi ko naman kailangan ‘yun.” True enough, he only needs the bike to transport him from his house to work. He mentioned that he’s very thankful for the donation.

First Bike Ride is accepting donations (monetary or bicycles) until December 15, 2021. We’re currently finding deserving individuals nationwide who deserve to be given a bicycle. For more information, message us at hello@firstbikeride.com or check our website for details.