The area where the cyclist fell used to have bollards that were removed and destroyed by motorized vehicles. These poles could have made her safe. 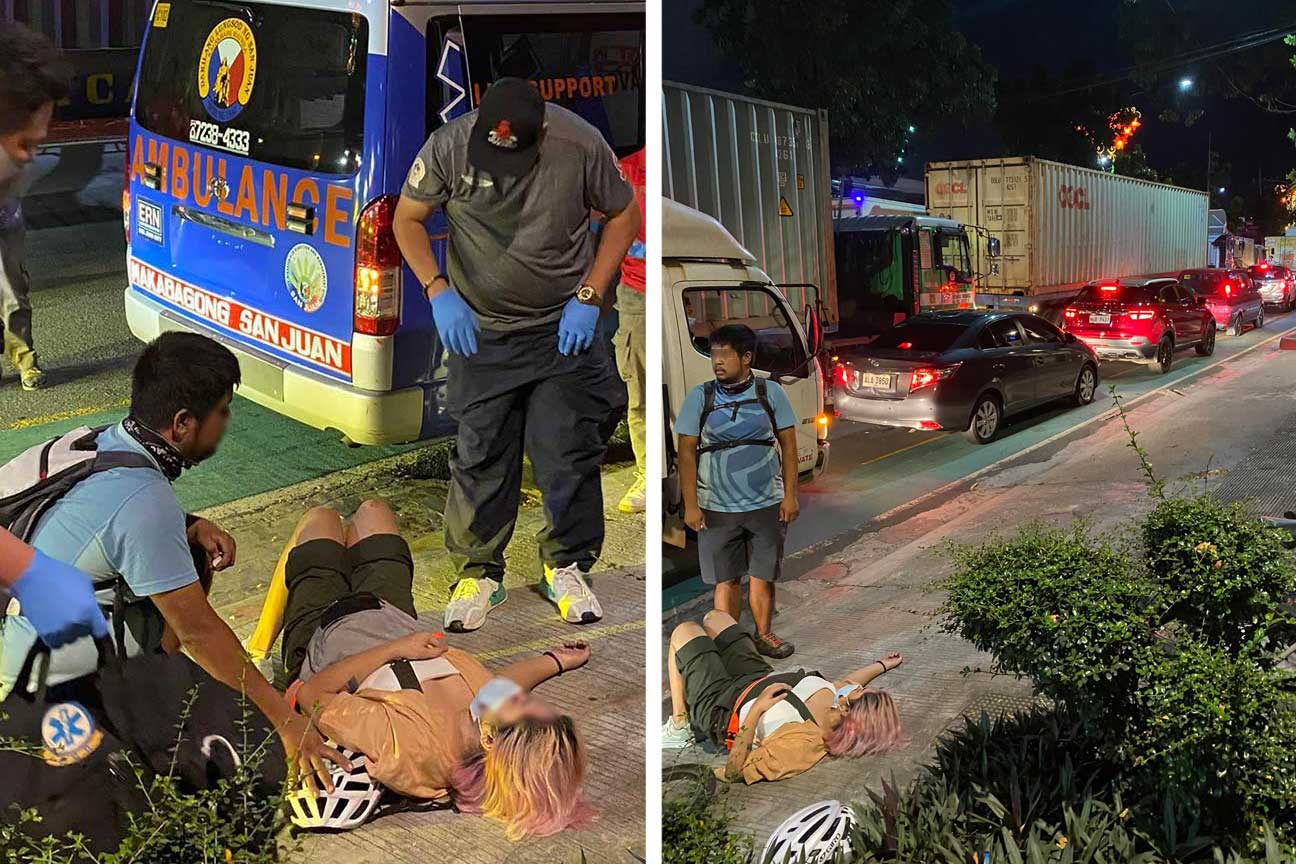 She was on her way home last night, December 15, traversing Ortigas Avenue in San Juan City when she saw that there was a jeepney on the bicycle and motorcycle lane blocking her way. She avoided the vehicle by moving on the side of the road, lost her balance and fractured her arm.

The incident happened in front of Ronac Art Center, a few meters before the Col. Bonny Serrano Avenue intersection, at around 11 pm. The area where the cyclist fell used to have bollards installed by the local government and financial service company Allianz — these orange poles used to protect active transport users and pedestrians as they stop big vehicles from entering the narrow dedicated space. Apparently, these were not maintained well.

According to transport planners, cyclists and advocates, almost half of these bollards in this side of San Juan’s Ortigas Avenue are slowly getting removed, some were hit and destroyed by motorized vehicles.

The biker, who we refuse to name, got rescued by the city’s emergency response team. It was thanks to a Metro Manila Development Authority officer who stumbled upon the injured cyclist. He immediately called the San Juan police for help.

According to a fellow cyclist who was with her in the hospital, the injured biker had her arm fractured and she had to wear a cast for a month. It was also her first bike ride with a new bicycle that she had customized that day.

The jeepney that blocked the bicycle and motorcycle lanes entered the dedicated spaces along with other four-wheeled vehicles because of heavy traffic. The drivers thought that they could cut the line only to find out that there are bollards that would stop them from going straight.

It’s getting common that motorists disregard the San Juan’s motorcycle and bicycle lanes, especially when enforcement get relaxed. These incidents force motorbike riders and cyclists to mix with other users, compromising the safety of themselves and others.

While waiting for the ambulance, San Juan police were present monitoring the injured cyclist. As we have observed, since there were authorities in the area, no four-wheeled vehicle occupied the motorcycle and bike lanes.

Now that pandemic restrictions are getting eased and more people are going out, protected bike lanes are getting removed in the city. Recently, Pasig City removed the bollards along Amang Rodriguez Avenue and has blatantly announced to the public that bicycle lanes will not exist during rush hour.

The traffic in San Juan last night was terrible due to the number of cars and trucks plying the road that evening.