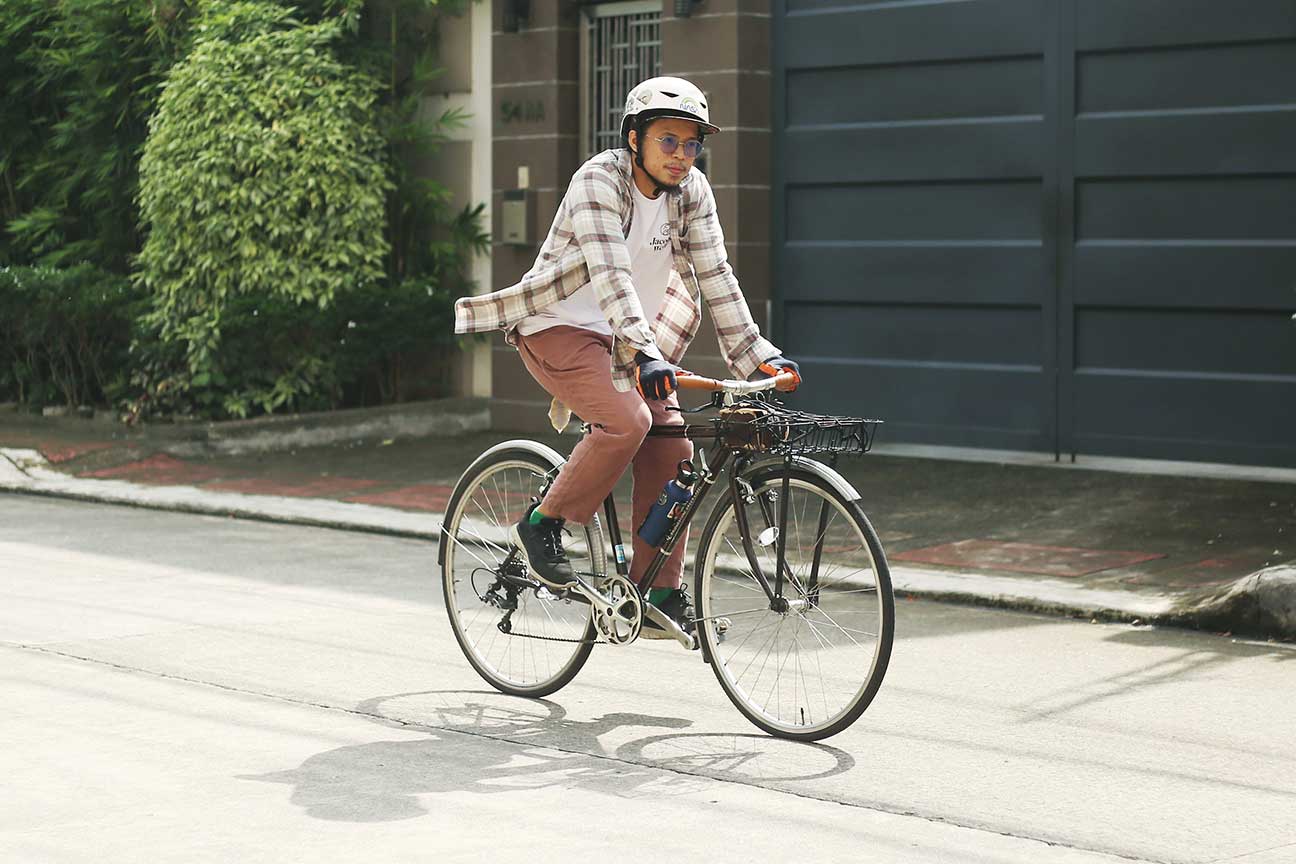 Ralph Tan brought out a hard pouch that held a beautiful ceramic tea set that he’d conveniently carry on bike rides. This would allow him to brew a drink in the middle of his trip. With this portable device, his leaves and hot water inside his insulated bottle, he’s all good.

“I like the concept of biking to slow down unlike some people who like to ride fast,” Ralph told First Bike Ride. “May isang trip, nag-bike ako to Tikling tapos by the roadside, nagti-tea lang ako. Parang mag-iisip ka lang kung bakit mo ginawa ‘yung mga ginawa mo.”

This healthy drink is nothing new to Ralph — he owns artisanal tea shop Jacob’s Well and cafe Tea House Coffee. However, he said that his love for this beverage can be traced back to his childhood when his grandmother would brew him a cup every morning.

His cafe is located in Quezon City’s E. Rodriguez. On weekdays, he would ride his commuter bike to work from his house in Sta Mesa, Manila,

E. Rodriguez is a busy avenue in Quezon City where painted buffered bike lanes, even though there are inconsistent barriers, can be difficult to use because many vehicles are parked and pedestrians use this space since the sidewalks are bad.

He added, “So I guess what I enjoy the most is there’s something new everyday: ‘Ano kayang meron ngayon?’ o kaya ‘May bike lane kaya ngayong araw or wala?’”

This guy recently rekindled his love for cycling this year. He got a bike last December, thanks to his friends who invited him to try cycling as a new hobby, and cycled 41 kilometers on New Year. The reason for that distance? Since it’s 2021, his group wanted to ride a length equivalent to the sum of 20 and 21.

Aside from his renewed relationship with a bike, cycling on January 1st was also significant for Ralph because he connects cycling and New Year’s day as something personal.

When Ralph turned ten, his dad gave him and his seven-year-old sister their own mountain bikes. The three of them would cycle around Manila, usually biking around the Malacanang area, every morning. It was a fun childhood memory, Ralph reminisced.

During his teenage years, Ralph gave up on cycling because he got into table tennis, basketball and music. The business owner also admitted that back then, he had this thought that biking would give him body pains, especially when he’s out on a ride for a long time.

Now that he’s back on the saddle, Ralph said that he particularly likes the part where he assembles the bike more than the actual riding. While he’s pleased by the experience of being on the road, he told us that he’s the kind of person who likes to do mechanical work.

He currently has two bicycles — one steel bike that he uses for his commute while the second is a road bike that’s mostly for faster and longer rides. Both of these two-wheeled vehicles, even though he bought them built, experienced tweaks and upgrades from this biker.

“I like working with my hands, maya-maya, may inaayos ako. That got me hooked with biking more than the idea of biking, I guess it’s the building itself,” he said. “It’s a source of joy to see something that you’ve built na parang ‘Oh, hindi siya nasisira.’ And other people find joy in it too. I guess that contributes a lot.”

The tea maker told us that his interest in building was introduced by his father. Back when he was young, he and his sister would watch their dad whenever he fixed stuff at home and the patriarch would welcome the kids, even teaching them some basics.

So when Ralph, together with his sibling, decided to open a coffee shop in Quezon City’s Apo Street a few years ago, he volunteered to do some of its interiors.

Before getting into tea, Ralph was involved in specialty coffee. He did consultancy work for a local coffee chain where he’d visit farms to build networks and acquire more knowledge. In the long run, he set up his own cafe.

Their dad was very supportive and would regularly visit the shop. However, he doesn’t drink coffee. It’s disappointing for the children to not let him enjoy the products that they create.

Chai is a Hindi word which means “tea.” It’s black tea mixed with milk and is a common drink in South Asia, particularly in India.

They were very meticulous in making the chai — everything is handmade and the ingredients were carefully picked. Their dad approved and it was his staple drink in the cafe whenever he visits. The tea was not for sale until their friends and some patrons noticed it.

Eventually, Ralph and her sister were able to make shelf-stable teas and they turned it into a serious business. Jacob’s Well was born. The coffee shop in Apo Street unfortunately closed but they opened a new shop named “TeaHouse Coffee, Tea & Dimsum” in E. Rodriguez earlier this year.

This time, their venture focuses more on tea. They also offer Assam, traditional Oolong, Jasmine and green teas, among others.

“There’s nothing wrong with milk tea, but there is more to tea than milk tea. I drink it every once in a while kasi craving siya. But at the same time, merong pang something else. Parang life, there’s more to life than what you see,” he said.