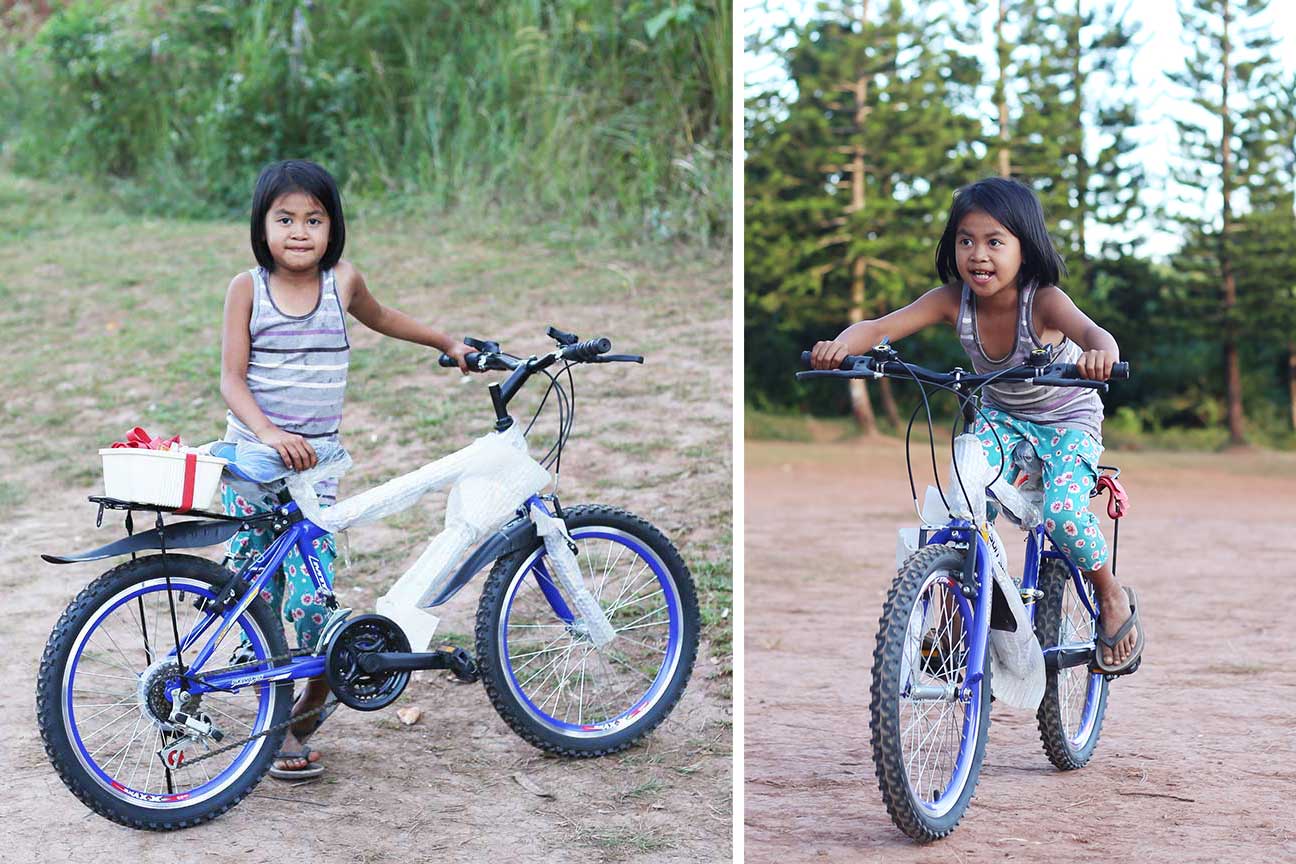 She walks three kilometers to Rizal’s “Little Baguio” from her grandmother’s house everyday to sell food to tourists. When we met this little girl a few months ago, she told us that she wished she had a bicycle so things would be easier for her.

Janelle Sabilala is an 8-year-old student who helps her family by selling food cooked by her grandmother. She goes around Sapinit Road with her small box asking people to buy her stuff.

(I’m selling food so we can buy rice. I like selling because it’s for us. All of my earnings go to my grandmother. It’s okay if I don’t get any because we live with her.)

She’s a very talkative and charming kid. We were resting along Sapinit Road after filming Super Ultra Panks when Janelle approached us and offered the lumpiang toge that her lola cooked earlier that day.

During our meeting, she noticed our bicycles and told us that they were beautiful and expressed that she wanted to have one. Sadly, she can’t afford to buy for herself because they’re poor.

(My old bike was broken so we sold it. It doesn’t have bearings. We sold it so we can buy medicine when I was sick. I had a fever and cough when I was six years old.)

With a bicycle, she can now easily go around Sapinit and peddle. Walking three kilometers is no joke, especially for a young kid like Janelle. Sometimes, when it’s time to go home during the afternoon, he’d ask drivers if she could get a free lift because she’s already exhausted.

Through the money we got from First Bike Ride’s bicycle donation drive, we bought Janelle a bicycle that’s pretty versatile and sturdy, with important accessories like bike racks and ropes, among others. We hope that the bicycle could last for years and is adjustable just in case the girl gets taller. This can also be shared to some of her family members who might need a bike ride for mobility.

Janelle enjoys her daily routine. She wakes up early in the morning to help in household chores. When her grandmother is done cooking, she’d immediately go to Sapinit Road to sell food to tourists — sometimes she sells pancakes, lumpia or cornick. When her items get sold out, she goes home to finish her modules.

The girl came from a poor family. Her father died years ago and her mom Reahlyn supports Janelle and her two other siblings by selling food in a camp site. When the lockdown restricted travel, her mom practically lost her job.

According to Reahlyn, her mom helps them by cooking food early in the morning with the kids selling it. The extra income, which is not much, is already a big help for some of their daily expenses. It was a blessing that Sapinit Road, also known as Rizal’s Little Baguio, got viral and became a popular tourist destination this year.

(She sells every day. But she just did this recently when Little Baguio opened, it got popular this year. She goes to school during face-to-face classes.

Since Janelle goes to work daily at the age of eight, we asked her if she misses playing — just like how normal kids would usually spend their free time. In an ideal world, children are not supposed to work. However, the poor girl realized that she had to help her family.

Well, during her down time, she plays with some of her playmates who also sell food in Sapinit Road. She told us that she sometimes asks permission from her customers if she could take their small bicycles for a short spin too — just to have a short bliss in the middle of work.

And now, she has her own bicycle and she’s really thankful. We really saw genuine happiness from the kid.

(I’ll use this bike when I’m selling. I envy my customers because we don’t have any bicycles. I really want to have a bike so I can bike around in our area and whenever I go here. So it’s faster.)

First Bike Ride’s donation drive is accepting monetary donations until December 15 — you may send through G-Cash (09177925749) or through BPI (9649 0411 88). Please message us so we can properly account the donations for our liquidation.

For those who would like to donate bicycles and accessories, you may send us a message on our social media channels or through email (hello@firstbikeride.com).

We give bicycles to deserving individuals — we have already handed out some bikes to a dad who had his bike stolen, a family with a father biking dozens of kilometers to work using a worn out BMX and a security guard with a junk bike.