There are days when he’d pump on the road numerous times just to keep himself moving despite having a punctured tire. And if things get out of control, he’ll just walk for hours. 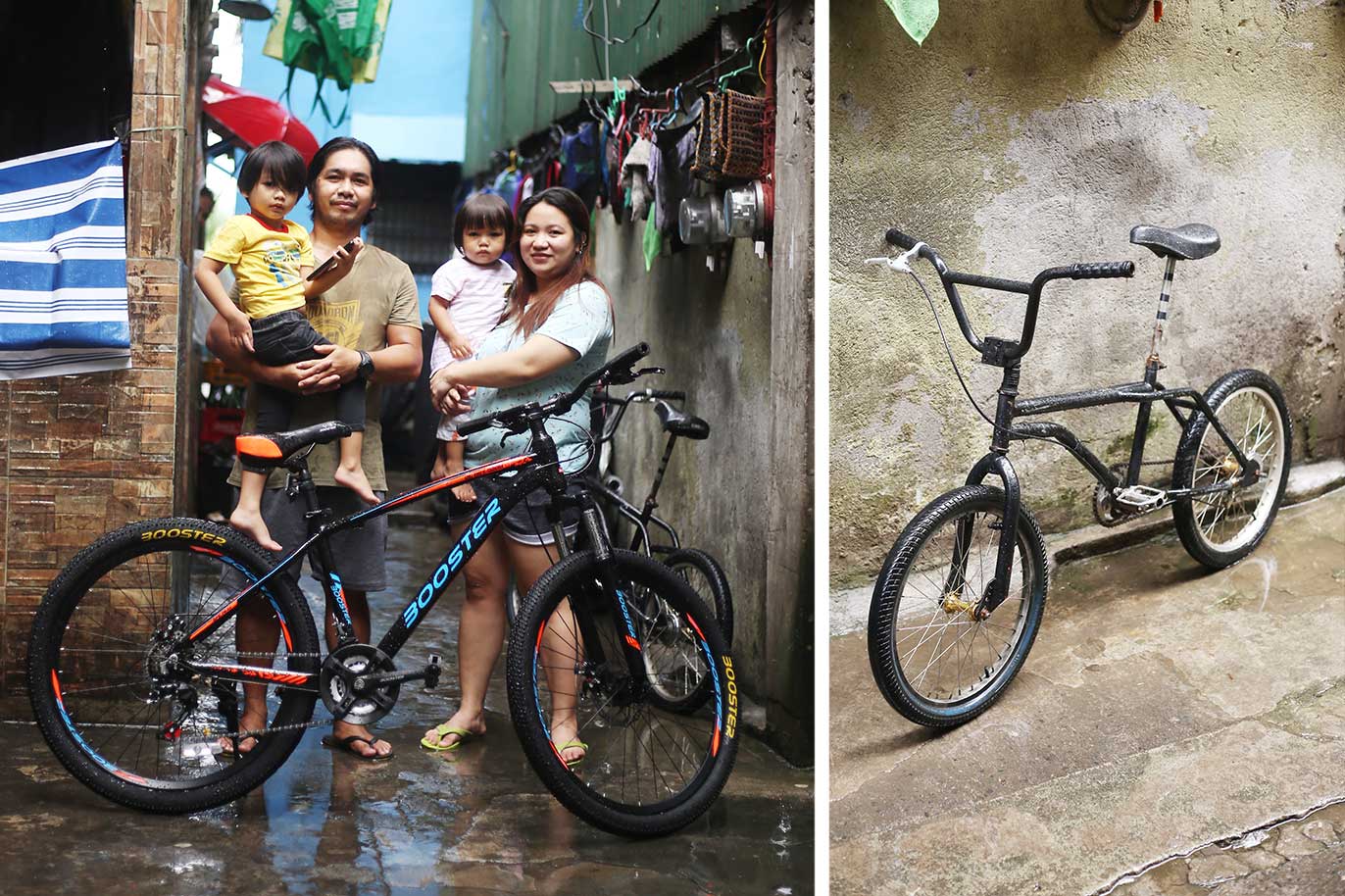 Chelsea Eugerio was praying everyday for something that might seem easy for others but is already nearly impossible for her family: it’s for her husband Enrique to have a new bicycle. Aside from prayers, she keeps on messaging random people but no one is responding.

So when First Bike Ride learned about the story of Chelsea and Enrique, we thought of giving them a new bicycle.

Warehouse supply checker Enrique Eugerio bikes to work daily from Mandaluyong to Valenzuela. He was using a dilapidated bicycle that’s pretty unsafe to use. There are days when he’d pump on the road numerous times just to keep himself moving despite having a punctured tire. And if things get out of control, he’ll just walk for hours.

“Minsan kapag na-flat, bomba lang ako nang bomba. Tapos padyak. Kapag medyo malambot na ulit, bomba ulit para lang maka-diretso,” the 35-year-old dad told us. He added that this is because there were no repair shops around and his tires were already worn out from vulcanizing.

(Sometimes when I get a flat, I just pump and pump. And then pedal. Then if I feel that it’s getting flat again, I’ll repeat pumping so I can move on.)

(I can see that my husband is having a hard time, really. He’ll sometimes walk from Balintawak to home, that’s why he’s exhausted. Commuting using public transport is expensive.)

The Eugerio family, composed of the couple and their 5-year-old son Ezra and 2-year-old daughter Elsie, lives in Mandaluyong. Enrique bikes to work for roughly 30 kilometers daily while walking from Balintawak will take him two to three hours.

“May mga araw na mga 11 pm o 12 na ng madaling araw siya makakauwi,” Chelsea said. His work sometimes starts at 7 am and he leaves his house at four in the morning because he’s anticipating road mishaps.

It’s not an option for them to transfer to Valenzuela because they just couldn’t afford it and because it’s simply hard to change residence during a pandemic. They’re currently renting a small space near Kalentong for 4,000 per month and they admitted that there are times where paying becomes hard.

You see, Enrique is working for a hardware that was originally located in Sta. Ana in Manila, a place that’s walkable from his home in Mandaluyong.

(My boss was able to buy a warehouse in Valenzuela so the workplace had to change locations. I can’t resign because I’m already a regular employee and it’s hard to find a job. That’s why I chose to bike.)

Life before the pandemic used to be relatively easier for this family. Aside from the nearby workplace, Chelsea used to have a job too. Now the mom’s just staying at home to attend to the needs of the kids and because she’s pregnant.

Enrique is using a bicycle that’s practically not safe to use. Chelsea bought it for only 500 pesos and she recalled that it was rusty. The husband had to repaint the frame and some parts were welded to make the vehicle work.

Despite the repairs, it’s still a terrible bike. While he can buy new parts, he’d rather spend his money on food for his kids and wife.

(His bike always breaks down and he must have it repaired because we can’t buy a new bike. There was a time when the seatpost cracked. Then he just walked back home recently because the bearings stopped working. He always gets a flat like last night. Sometimes, he cuts work just to have the bike fixed.)

He was able to get new hubs though, all thanks to the government subsidy that was provided a few months ago. He wanted to save the money but the bike part was  essential for his work trips that keeps his family surviving.

That’s why they were so happy when we told them that First Bike Ride, through the help of our generous donors, will give Enrique a new mountain bike.

(Before, I bike for 1 and a half hours when there’s no problem. It’ll be quicker now and I’m safer. Thank you very much.)

Chelsea expressed her happiness too, saying that she didn’t expect that this would happen after asking many people and cycling-related social media accounts for a bicycle.

Aside from the adults, it was also their eldest son Enzo who’s glad that his dad finally got a new bicycle. It’s his 6th birthday on Wednesday and the mountain bike is the perfect birthday gift.

(My eldest had a funny remark because he wanted to have a haircut already. I told him that we don’t have money yet for his hair because we need to fix the bike. He said, “why can’t we just buy a bike so I can have a haircut?” I replied, “don’t worry, it’ll come. We might find something.)

Tomorrow is Monday and it’s the start of another work week for Enrique. But for sure, he’ll leave the house with no worries of getting inconvenienced because of his bicycle.

First Bike Ride bought a mountain bike for Enrique along with other accessories and inner tubes, so he’ll not have them battered from vulcanizing. We also gave him a bicycle lock so he can secure his bike at work and in his home.

Our donation drive is continuous and we’re still accepting monetary help, bike parts and bicycles. Just go to www.firstbikeride.com/donate for more details. This is the second bicycle that we’ve given from our recent donation drive.