Bryce Salhab: Riding in style with his track bike

“It’s not trying to be cool why you want to ride brakeless, it’s more of how the mechanism was really created and how you work with it.” 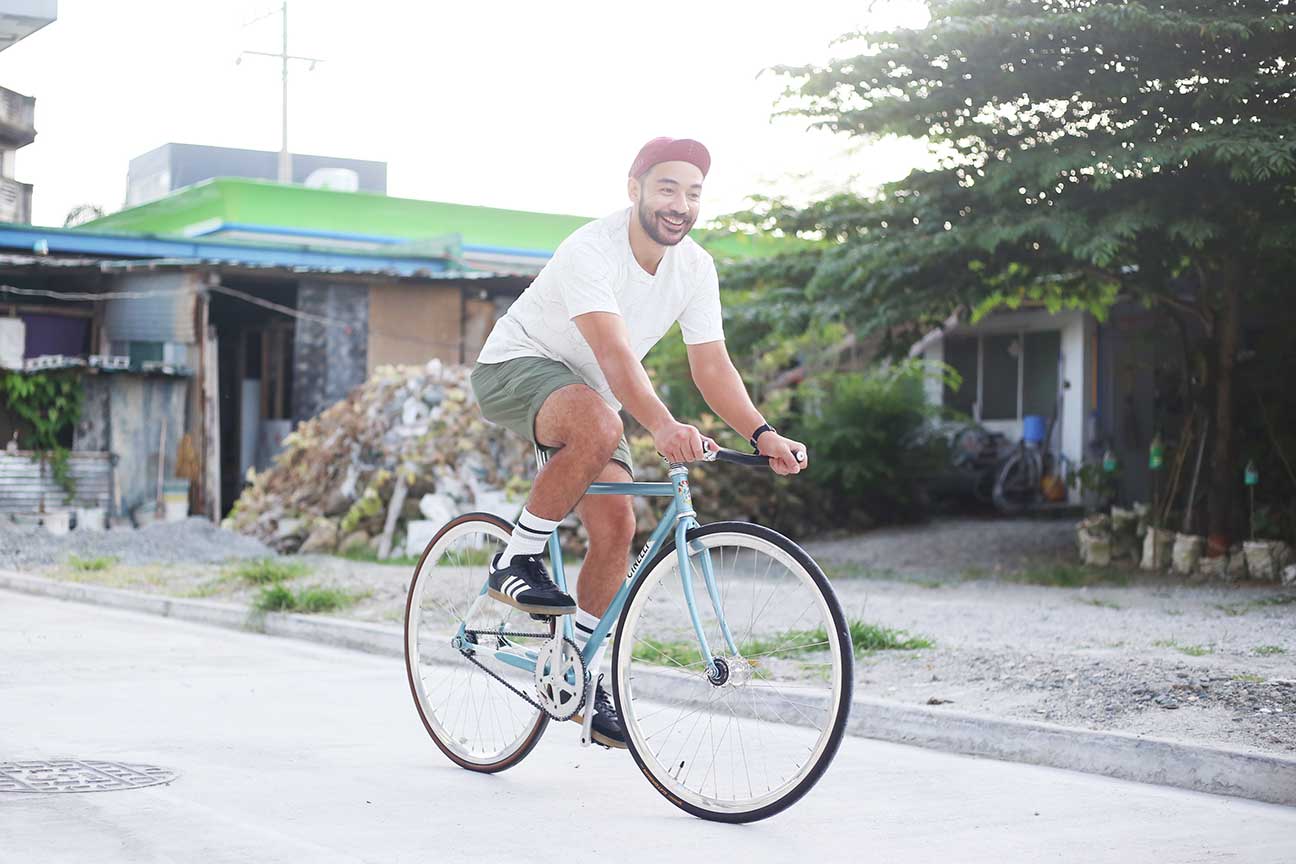 With his classy Cinelli Gazzetta, Bryce Salhab weaves through the rough Metro Manila traffic with grace, crossing the streets with rhythm and smoothly getting into those narrow spaces in between slow moving cars.

One night, we biked with him from Makati to San Juan and we could attest that he’s reasonably fast yet very wise on the road. He’s been cycling again for more than a year and he’s really enjoying that he got back into it.

“Biking for me is a good sport or a good type of training. I wanted to use it as a tool, a vehicle, for myself to get to places conveniently with a little bit of joy and workout going on,” Bryce told First Bike Ride.

He added, “It also taught me to be in the moment. You have to anticipate, you have to let go of what you’re thinking. Before, I was an over-thinker. My mind goes places but now, I have learned to put it in one direction. That focus could mean your life or another individual’s life.”

When he’s biking, he usually wears something comfortable — most likely a shirt with a fabric that’s apt for that day’s cycling activity. But on most days when he’s out of the saddle, you’ll see him looking dapper with a suit or a button-down shirt. Well, it’s part of his job because he works for heritage menswear shop The Signet Store.

Believe it or not, he bikes to work. He changes clothes when he arrives at his workplace. People have this misconception that cycling going to work would make one dirty, sweaty or washed out. Bryce, who cycles four kilometers to his job every day, is a testament that this idea is incorrect.

The biker told us that he’s been cycling a lot and his body has adapted to this activity. But more than the training and the physical adjustment, he said that planning is important to maintain the certain composure, cleanliness and appearance that’s required for his job.

“It’s practice. It can be learned, really. You have to plot it in your mind. You have to understand when’s the best time, what roads to take, you take into consideration the temperature,” he said. “I really prepare well so I am very comfortable riding to work.”

Before the pandemic, Bryce would just hail a car going to work. But when public transportation was halted during the beginning of the lockdown, he shifted to walking and eventually found cycling as a viable option for mobility.

“I realized with riding my bike to work, especially now that I’m used to it, that I get to work more efficiently than waiting for a cab or getting a Grab or getting picked up by a friend,” Bryce said. “Even if I had a car, I’d still prefer to bike because for one thing, I find it easier to move around.”

He had a single-speed bike that he got from a friend years ago. It was in a bad shape so he decided to bring it to TryOn to get it fixed. When he was there, he saw the Cinelli Gazzetta frame and couldn’t stop thinking about it.

He would message his schoolmate Billy, the son of TryOn’s owner, about the frame, asking questions daily. When Bryce decided to purchase the frame, he built it right away.

“It was my first time riding a track bike. When I bought it, I had no clue on how to ride it. I don’t know what I was getting myself into but I know the strength and workouts that it could bring. I liked the feeling that I’m in control of the mechanism, the bike, basically,” he said.

Through veteran fixed gear riders Kiko Escora and Noel Maralit whom he asked for guidance in riding a brakeless bicycle, he managed to be at ease with his Cinelli in just a quick period of time. It’s not easy to ride a track bike in Metro Manila and Bryce really trained well for him to be one with his bike.

Now, apart from cycling to work, Bryce uses his track bike for fitness — he would do loops around Ayala Triangle or in Bonifacio Global City during the morning for his cardio. During his free day, he would go on longer distances around the metropolis or nearby provinces.

It was incredible that he managed to travel to Kaybiang Tunnel and Pila in Laguna using a fixed gear. These destinations are tough — not only is it difficult to bike hilly roads on a single speed, it’s also challenging to go downhill with a brakeless bike.

After doing many sports during his younger years — he played basketball, badminton, martial arts and weightlifting, among others — it’s not really surprising that Bryce was able to easily keep up with the demands of riding a fixed gear. He’s quite competitive with himself and likes challenges.

“You learn from challenges. You test yourself, you test your wit, you test your capacity. You’ll know more about yourself,” he said. “It’s not trying to be cool why you want to ride brakeless, it’s more of how the mechanism was really created and how you work with it.”

Special thanks to 238 Pablo for allowing us to use the space for the photoshoot.