His bicycle was stolen, along with his son, in Manila

After this unfortunate circumstance, Dennis saw himself walking again to his workplace. First Bike Ride learned about his situation and we thought of giving him a mountain bike donated by a trusted bike shop in Makati. 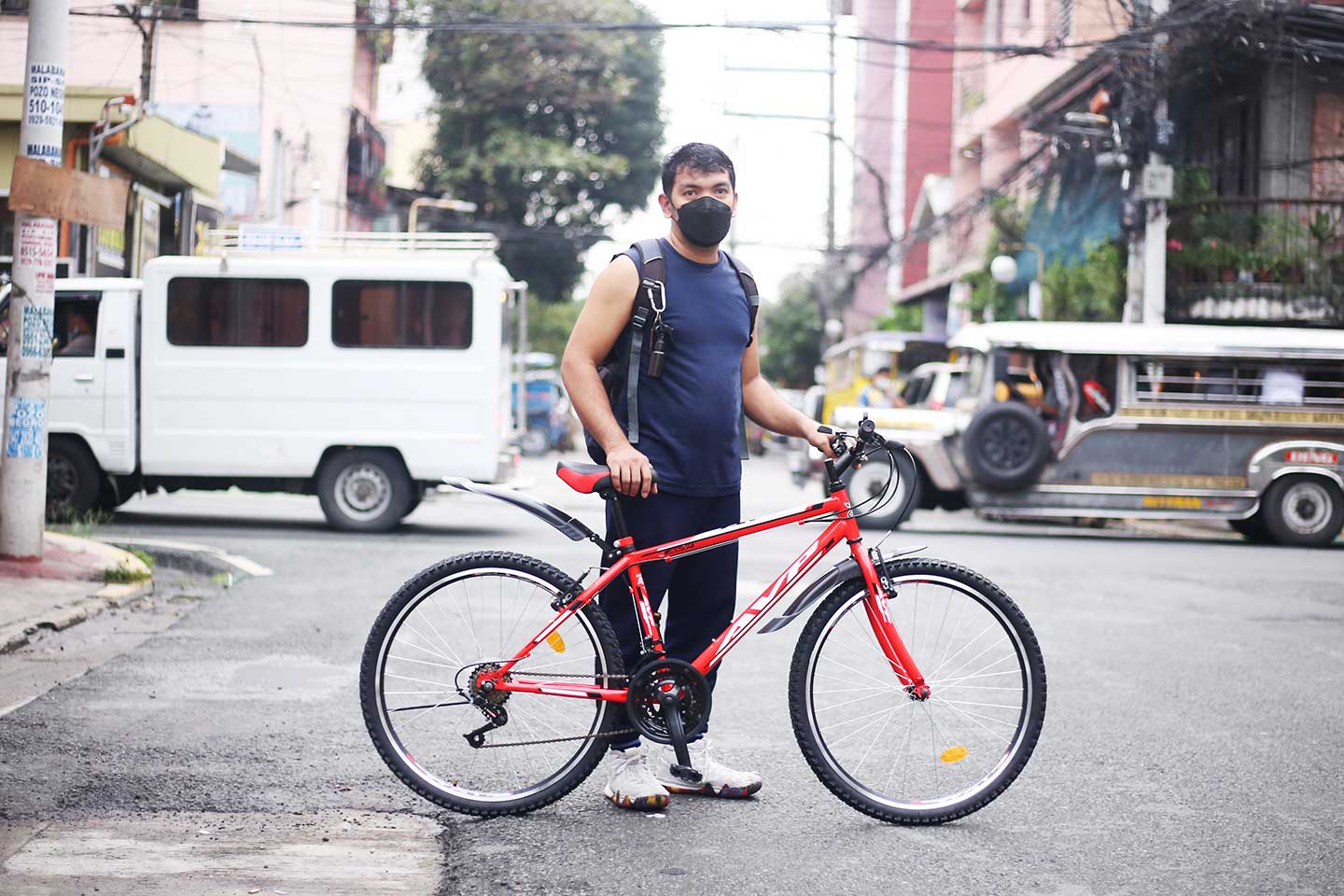 Dennis Seco, 38, walks every morning to reach his workplace and during the afternoons back to his family. He packs items for online stores. Traveling on foot to the warehouse takes around 20 minutes, perhaps a decent exercise for others.

However, going home is quite difficult. It is tiring for someone who stands while working for eight hours. He could choose to take the jeepney for 18 pesos a day but he still opts to walk because it’s free — the money that he’ll be spending for his fare can be used to feed his family.

(A former workmate offered his bike that’s stocked at his house. It’s just 1,300 pesos but I didn’t have money at that time. He agreed that I’ll just pay when I get my salary.”

His friend agreed and Dennis, who lives in Tondo, hurriedly picked up the bike in Caloocan. The bicycle can solve his mobility problem: it’s not as painful as walking, he’ll be able to cross the streets easily when there’s flood and he’ll never waste money for fares.

As promised, he returned to his friend and paid for the bike after a week. On that day, he went back home to park his bicycle because he’ll be taking the jeep with his wife to Divisoria. The couple will be buying stuff that they need for the house.

(When we were out, I didn’t know that my two sons used my bike. They were taking turns. And then it seemed that the youngest was taking too long for his bike ride. When I arrived home, my mother-in-law asked me to look for my son because he hasn’t returned.)

They looked around Tondo but his 9-year-old son Andy was nowhere to be found. At around 4:30 in the afternoon, a stranger randomly sent him a message via Facebook messenger telling Dennis that the boy was found crying in Pritil, an area in Manila that’s 2 kilometers away from their house.

They had a video call and Dennis finally saw that his son was safe. After the phone conversation, this father hurried to a nearby water refilling station to borrow a bicycle and immediately pedaled to his son.

Apparently, the son was tricked by the thief, pretending that he is an acquaintance of his mother. It was fortunate that the kid was able to get off and it was only the bike that was taken.

(The guy saw him biking and forcefully took him somewhere. He told my son, “here’s 100 pesos, we’ll give this to your mom.” The kid must be thinking that the man knew my wife. He was scammed. He added, it felt like my son was kidnapped.)

After this unfortunate circumstance, Dennis saw himself walking again to his workplace. First Bike Ride learned about his situation and we thought of giving him a mountain bike donated by a trusted bike shop in Makati.

When we gave the bicycle to Dennis, along with some bike accessories, he was really happy.

(I can’t buy a new bike because I need to put my children first. We survive with what I earn but if I can’t complete a work week, it’s lacking. For example, we were out of work last lockdown.)

So we asked him how he was able to get by after the previous Enhanced Community Quarantine?

(We try to save for rice. When pay comes, we buy rice because we can get by with other food that goes with it. We’re good as long as the rice is enough for everyone.)

During times when there’s really nothing for them to eat, he borrows money. He just looks forward to the next payday and then divides it between the family and for the loan.

Dennis loves his family so much. He has four kids and he’s doing his best for them to survive. Unfortunately, life has been more difficult for him but he’s not complaining. The guy is just working hard to provide food on their dining table.

(I put my children first. It’s fine if I get hungry. I can’t let my kids starve.)

This father is really thankful that he has been given a bike, he repeatedly tells us that this is a big help for him. Now that his wish of having a bicycle has been granted, we asked him if he has other things that he wants to have.

Instead of thinking about himself, he thought of his kids. They were not able to enroll last year because online learning required them to access the lessons using gadgets. There were free tablets given by the city government but Dennis’ family was not able to avail even one piece. Currently, they have two cellphones being shared by his four children.

(If I have another wish, it’s not going to be for me but for my children because they’ll be having online classes. I wish they’d have cellphones. We just enrolled them now because they were not able to attend the previous academic year because we don’t have any gadgets.)

First Bike Ride is celebrating its first birthday today, September 1. As part of our anniversary, we opened our bicycle donation drive for the second time where we’ll be giving bikes to deserving Filipinos nationwide.