The architect who documents his fixie rides in 360

This guy never knew how to ride a bicycle before the pandemic. He was basically forced to learn out of fear of acquiring Covid-19 from public transportation. 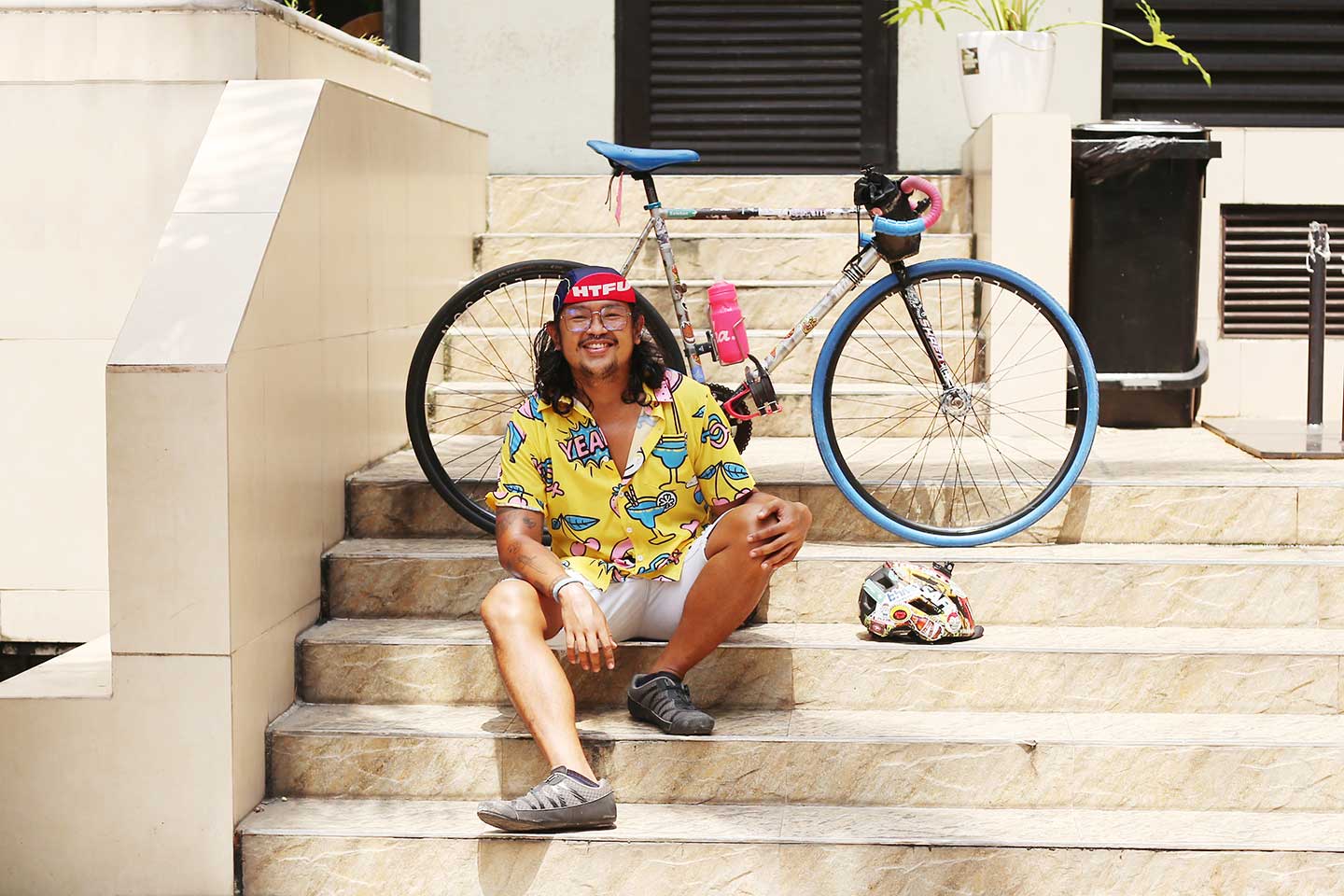 Ralph Aguilar arrived in a hip coffee shop in Makati with a bright-colored polo shirt and long stick with an action camera attached on his fixie. He’s documenting his rides, he told us, which will later be uploaded on his bike Instagram page @rideout.mnl.

This architect bikes to work, something he started enjoying when the quarantine restrictions eased and he was required to report to the office.

(It was during the lockdown and I told myself that if we’re asked to return to work, it’ll be hard to commute by jeepney. My mode of transport used to be jeeps and buses so I said that after ECQ, I’ll have a problem because I’m afraid of getting the virus.)

This guy never knew how to ride a bicycle before the pandemic. He was basically forced to learn out of fear of acquiring Covid-19 from public transportation. It was his uncle who taught him how to bike.

His first bicycle was a large mountain bike, something that’s one size bigger for him. He recalled having body pains after cycling to work for the first few days.

(I was so afraid at that time, my route was Kalentong and then Shaw. I was sweating during my first bike commute — not because of exhaustion but because I was nervous.)

Eventually, this cyclist bought another two-wheel ride through the help of his biker-friend Vince. He was introduced to classical frames and road bikes. Back then, he’s clueless about the geometry and other technical aspects of a bicycle, though he admitted that he liked the look of a vintage commuter.

He enjoyed the geared trips for a couple of months but told us that it was not his ultimate bicycle goal. For him, it was learning how to ride a fixie.

Terry is a filmmaker who’s known for documenting urban cyclists. He’s Ralph’s inspiration that prompted him to buy an action camera last December as a Christmas gift to himself.

But aside from the act of filming bike rides, Ralph’s primary reason for getting a camera is for him to record his rides and watch his progress. According to him, he wanted to log his biking skills and see how much he has improved in cycling with his classic commuter, and eventually on fixed gear when he bought his fixie last March.

(I wanted to record myself so I can improve fast on my riding. That’s when @rideout.mnl started. It’s like an online journal and I didn’t have a goal of it getting any traction at all.)

Well, it gained traction and people started to notice his videos. Like what he said, it’s mostly a video of himself cycling. But since he’s using a GoPro Max, his audience would also see snippets of his routes in 360 degrees.

From time to time, Ralph also invites other cyclists to be featured on his Instagram. His videos are basic: it’s just someone riding a bike with an awesome song attached during post production. They might be simple, but to be honest, there’s a charm in his uploads — perhaps the good choice of music adds to its appeal.

The good taste of the videos’ musical score can perhaps be attributed to Ralph’s background. He used to be a wedding singer. Apart from that, he’s also used to sing at lounges in Shangri-La, events and he’s part of a tenor band.

(But I’m an architect by trade but I’m not in the design field. I’m in the project construction management industry. My likes are far from each other. With regards to the music on my videos, I use anything that I feel suitable or what fits my taste. I don’t care, I just put anything that I like, what’s my mood at that time.)

From someone who was so afraid of biking in the streets of Manila and now to nailing the streets with his fixed gear — he can even do no hands and track stands — Ralph has definitely reached his cycling goals. And he gets to inspire, though not his intention, other people through his Instagram uploads.

Will he be riding out in Manila? He tried doing a 200-kilometer Laguna loop before and went to Bulacan during a Super Ultra Panks episode. But for future out-of-town trips, he’s thinking of getting a new bike first.

(I want to ride outside Manila but since I got interested with fixed gear, there’s a sense of worry like if I bonked, what’ll I do to go back? I’m waiting to have a gravel bike so I can ride out of Manila.)