Every time Jannifer goes out biking with his wooden bicycle, people would really notice him, call his attention or take photos of his ride. 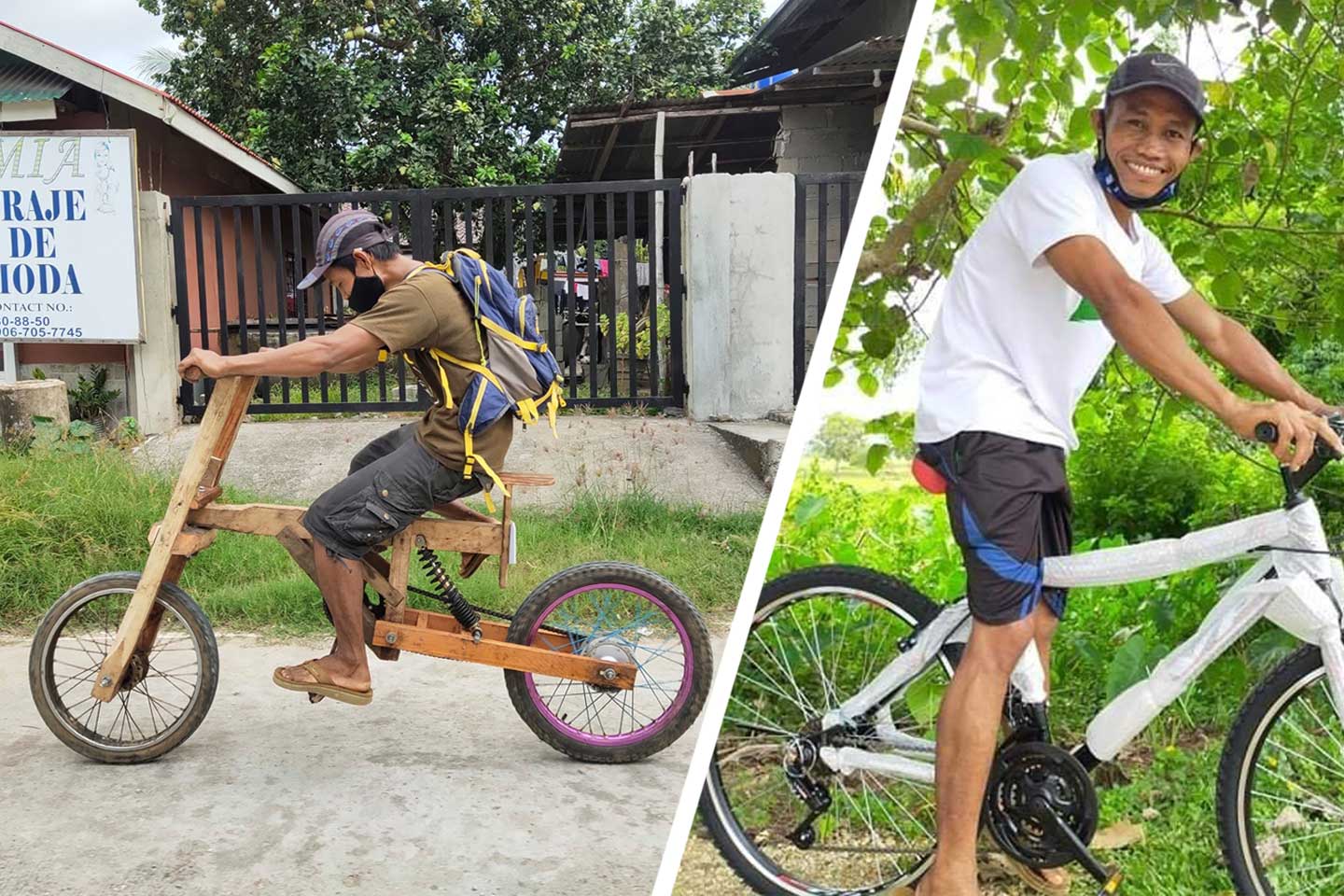 If you can’t afford a bicycle, why not make one? A wooden bike, perhaps.

When the nationwide lockdown was imposed due to Covid-19, public transportation in Guimaras was halted and Jannifer Cabaya needed something to help him travel to places. He knows how to drive a motorbike but he doesn’t have a driver’s license.

He saw that there were a lot of people cycling so he had this idea of maybe buying a bike for himself.

(I went to a bike shop and asked for the price. It’s expensive and it’s just a waste of money. A BMX costs 6,000 pesos. Then I thought of buying wood. I drew first, asked the cost and then started building.)

It was 23 pesos for a 2×2 wood and 90 pesos for the bearing. He also paid for the welding of his pedals and some metal scraps while the rest of the items were donated or scavenged. The wheels came from a pastor and the drivetrain was made from motorcycle parts. Overall, he recounted that he spent around 1,500 pesos for the wooden bike.

Initially, people were worried that he might figure into an accident because they think that the bike was not fit to be on the road. While it can be true, Jannifer said that he had problems during its first few rides because the brakes were just made out of rubber that came from slippers.

Jannifer only used his bike to go to the market so he could buy food for himself. In the small island of Guimaras where he lives, traffic is relatively peaceful and he said that he can manage to be safe even if he’s cycling downhill.

(A decent bike is important because if a bike is decent, you’ll be comfortable on the road. Making it was just for fun. I made sure that I will not get in an accident.)

Every time Jannifer goes out biking with his wooden bicycle, people would really notice him, call his attention or take photos of his ride. And then one time, Renzie Azucena saw this cyclist while on the road, took some snaps and uploaded it on his social media.

Then the photos of the wooden bike and Jannifer went viral. After a few days of being up on the internet, Renzie’s pictures were reposted to different platforms, noticed by millions and were eventually picked up by major news organizations. Concerned citizens searched Jannifer and donated proper bicycles.

He was able to receive three bicycles with steel frames. He’s currently using one right now and he lent the other two to relatives who needed bikes too.

(It was only my dream to own a bike, hoping to own even a cheap one. But I never thought that I’d be given something bigger than what I dreamt for.”

Back in North Cotabato where he grew up, Jannifer remembered renting a bicycle for five pesos an hour. He was a happy kid whenever he got to ride a bicycle. Even when he moved to Iloilo and eventually in Guimaras, he never had one. It was only until he was 32 years old that he managed to get his own after making something out of wood.

Where’s the wooden bike now? It’s still with him and he uses it from time to time because he really loves it. Sometimes, if there are bike rides with friends, he would use the one that he made and let a buddy borrow his steel bike.

Jannifer works as a caretaker in Guimaras and he uses his bicycle mainly for transport. When he gets free time, he rides for leisure. But he tells us that it’s not really that often.

(It’s great to bike here because it’s quiet. What’s nice about Guimaras is that you can cover the whole island and you’ll cycle beside the beach.)

But because he’s busy with work and due to the changing travel restrictions, he admitted that he’s still not yet completing a Guimaras loop. Maybe next time, when we visit Guimaras, you can do it with First Bike Ride and friends. Perhaps a side trip to nearby Iloilo can be awesome too.