This trio cycling around Makati on a mamachari is melting everyone’s hearts. 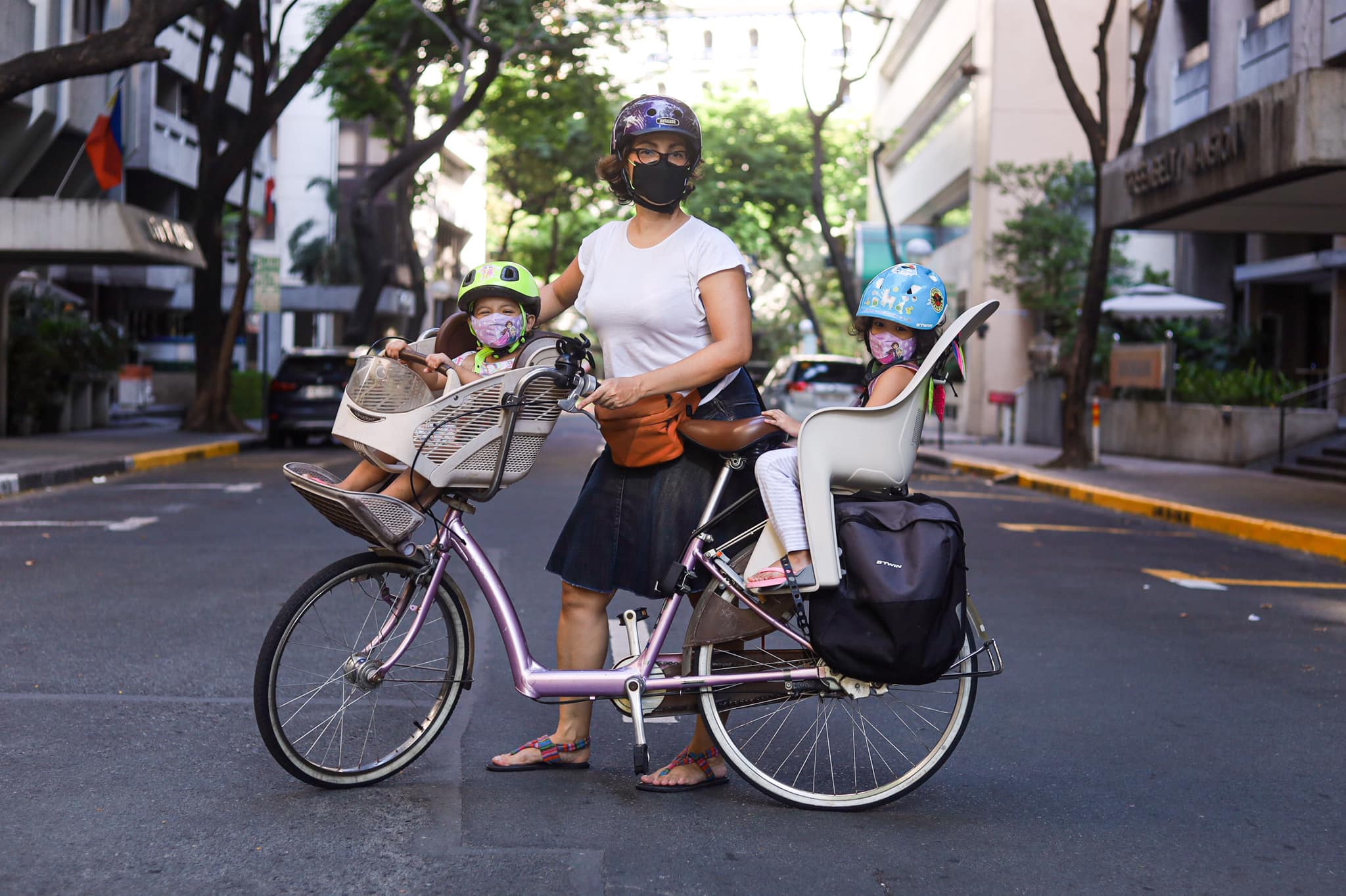 Every time we’re in Ayala and we get to see this family biking around the area, we can’t help but be amused and smile because they are charming, pleasant and very much inspiring. On Philippine bike social media, they’re known as “Two wheels, three hearts.”

Meet these three lovely humans on a bicycle, Corinna Pettyjohn and her two adorable kids Ada and Thea.

Corinna told us that before the pandemic, her family always went outdoors because the young girls love it. However, the beginning of the community quarantine restricted the children from going out and it’s something that’s not good for them. Imagine being a kid getting stuck at home for months, can’t play with your friends and spending many hours on gadgets and TV.

“We couldn’t really take them to parks and you could see that not having outdoor time really has an effect on kids especially that they’re just at home. We had to bring them outdoors,” Corinna said.

“I’d seen pictures and videos of people in Japan and Europe with kids on their bikes. So, well, why shouldn’t we be able to do that here?”

In July last year, after careful research and planning, this awesome mom bought a three-speed mamachari with one child seat from an online seller based in Marikina. Then, Corinna later bought and installed another carrier because she needed extra space for one child.

A mamachari is a Japanese bicycle which means “mom’s bike.” Corinna said that she had to get used to the balance but it was not that difficult, she practiced with cargo. Preparations are done every ride and safety measures are in place like helmets and seatbelts, among others. After all, she’s the mom and she’ll make sure that her children are fine.

The kids, who showed their enthusiasm from the beginning, enjoy the rides and so does Corinna. She mentioned, “When I’m on a bike with them, it’s a pleasant time together. We’re having fun and they’re entertained.”

They started cycling outside when the IATF eased restrictions and allowed children to go out and exercise.

Her bike is not expensive too, she spent around 10 thousand pesos on everything including the upgrades and additional carrier. She noted that the bicycle is heavy, roughly 25 kilos without load, but you can’t feel the weight when you’re riding it except if you’re climbing an uphill road.

These three are making everyone happy whenever they go around in the streets of Makati. And it’s good that they’re spreading the inspiring adventures online through “Two Wheels, Three Hearts” on Facebook and Instagram.

“I started the page because a lot of people had questions about it and I was like, people deserved to know how I’m doing it and then they can make their own decision whether they can do something similar,” she said.

Corinna noted that she’s not unique because there are a lot of moms in the country, particularly in Marikina, who have been traveling with their kids on a bicycle.

“It’s usually really positive reactions and you hear people saying, ‘oh let’s get one like that,’” she said. “I do get negative comments online like ‘I shouldn’t do that.’ We gotta trust mothers and parents to keep their kids safe. We know what we’re doing to some extent, right?”

Two Wheels Three Hearts is really encouraging. We’ve seen individuals, mostly mothers, saying that they were inspired to bike with their kids because of Corrina, Ada and Thea.

Aside from being an inspiration, the posts of Two Wheels Three Hearts give powerful messages and lessons for people who make a city work like residents, government officials, business owners, among others. It comes from the perspective of a mother with small children.

We asked Corinna about being safe in city streets, not just as a cyclist but also as a pedestrian.

“The biggest worry, and the real danger is vehicles. Like I said, if we fall over, we’re going to be fine. But if we’re hit by a truck or car, that’s another story,” she said. “What we need to do, especially in busy streets and inner city streets, is that we just really have to make it is not okay to be driving fast, not stopping for pedestrians and not paying attention to your surroundings when you drive.”