NOT GIVING UP: He just keeps on going even if it’s hard

His first bike ride after years of not riding a bicycle was pretty intense too. He almost threw up after a kilometer of cycling around the village. 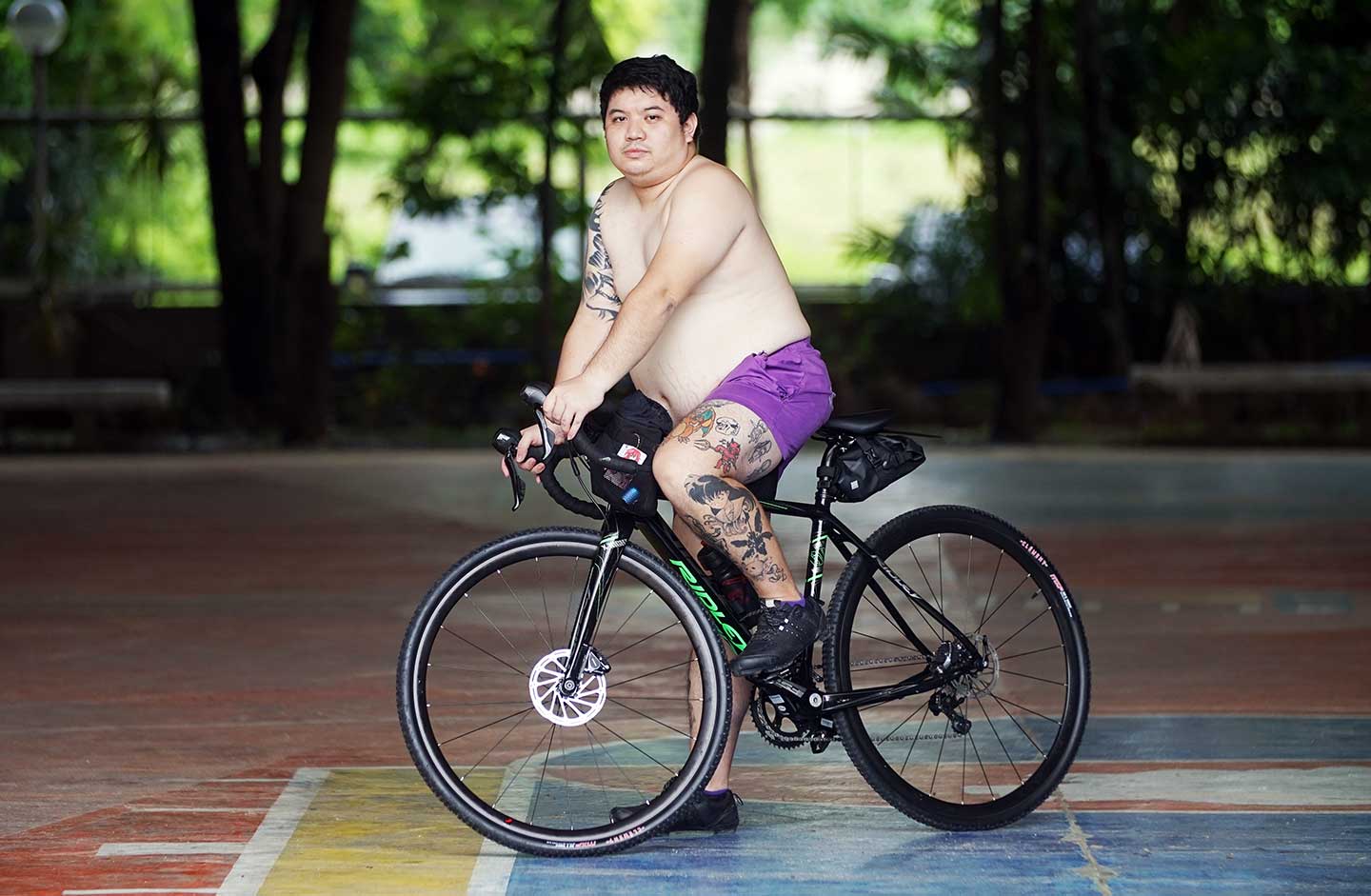 His friends were already far ahead of him and Chito Villaluna was still climbing a seemingly endless uphill road — he’s already struggling and there’s a need to catch up. The dilemma was whether to pedal harder to keep up with the group or reserve energy because he’s not yet even completing half of his gran fondo journey.

Through his mobile phone, he then played a song from the anime “Haikyu!!,” probably to give this cyclist a boost of motivation. It suddenly started drizzling. As the rain poured, Chito saw himself shedding tears.

Chito cried three times on that day when he completed his first century bike ride — 140.16 kilometers to be exact — because he never thought he could do something like that.

“I thought that I could do a hundred but to push myself to do a 140, that’s plus 60 kilometers from my previous longest ride,” Chito said. “There was pain, joy, sadness, frustration. There were some parts that I wish I was stronger at, but there’s joy because I was able to finish it.”

You see, biking a hundred kilometers in one day for the first time is already a notable feat. That itself is a story worth telling. Carrying on an additional 40 to that tiring challenge is just incredible.

The first time that Chito cried on that ride was during that downpour. The second was on the service road when he saw on his bike computer that he hit a hundred kilometers. And the last one was when he’s biking near home because finally, he completed the challenge.

“I’m a very emotional person. Like honestly, even hearing songs make me tear up, even hearing a certain note or a certain part of a song, I get teary,” Chito said. “’Yung last stretch before entering my village, naiyak ulit ako na natapos na. Kasi putangina, nagawa ko. And I was talking to myself, ‘fuck, you did it, you son of a bitch. Tangina, ginawa mo ito.’”

(I cried on the last stretch before entering my village because I finished it. It’s because I did it.)

His first bike ride after years of not riding a bicycle was pretty intense too. He almost threw up after a kilometer of cycling around the village.

This guy admitted that the pandemic saw the most unfit Chito ever, he was practically just on his bed or on his chair. His life was completely sedentary and he barely left his room. Then one day, his friend Deej Fabian from DCG Cycling invited him to join them on their biking trips.

Chito was putting it off for some time because he was saving up money for his own bicycle but his friends were very determined to make him join them. He was left with no choice but to finally ride when Deej let him borrow his mountain bike.

“We went around the village once and I almost threw up. Pero after we rested for a bit and after I did a few more turns, we went to Decathlon,” Chito recalled. “It’s my first time experiencing biking on the open roads of the Philippines.”

He was more excited than nervous. After seeing his friends take on fun cycling adventures in Rizal, Chito told himself that he wanted to experience that too. He knew that it can be difficult but he’s thankful that he has friends like Deej and She’s Only Sixteen vocalist Roberto Seña who kept on encouraging him.

“There’s always discouraging thoughts in my head like ‘I shouldn’t have done this, I shouldn’t have started doing this.’ But at the same time, it’s like, ‘no, you’re just starting. You’ll get there,” Chito said. “Anything that you do, you do not start with ‘oh I’m so good at this.’”

After training hard daily and finally getting his own bike, it was time for Chito to conquer Sumulong Highway in Rizal with his friends. Unfortunately, on that attempt, he passed out.

While he was pedaling, concentrating on an inclined pavement, he fell off his bike near Antipolo’s big golf ball statue. He blacked out for around three to five seconds. When he opened his eyes, he was surrounded by cyclists asking if he was okay. A support vehicle took him home that day.

But that setback did not deter Chito from cycling and in finishing that Sumulong Highway segment. When he got a new bike, a cyclocross Ridley, he went back for a sweet revenge.

“The revenge was in February, and with this one, I made it. But with four stops. That’s the very first completion. It’s so hard to describe it in words. It was all the different emotions overflowing,” he said. After that ride, he was able to finish more Sumulong rides.

Cycling was something enjoyed by Chito, even when he was young. Back when he was a high school student in Hong Kong, he would always take his bicycle to go to school or visit friends. It was only when he went back to the Philippines almost ten years ago when he stopped biking. He thought that it’s not easy biking on Metro Manila roads.

If you compare it with Hong Kong’s road, the Philippines still has a long way to go. According to Chito, they have separated bike lanes there, beside sidewalks and far from the roads where cars pass. He said that even city buses accept bicycles if people find it difficult to pedal.

“My mom got me a mountain bike back in high school because she told me to lose some weight and so I can save money instead of paying for the bus all the time,” Chito recalled. “Biking always had a good effect on me growing up. It was one of the things that I enjoyed learning as a kid.”

Now, Chito finds that it’s fun cycling in Metro Manila. Despite all of the challenges, we see that he’s regularly doing bike rides: even if it’s just quick spins inside his village or intercity rides with friends. But before cycling and before this pandemic, Chito has been enjoying the city because of the music and nightlife scenes.

If you go to his Instagram, you’ll probably notice that he uploads a lot of topless self portraits. Well, he’s known for that in Metro Manila’s coolest bars and in his music circle. He’s Bomba Chits.

Going topless started in La Union, he told us. It’s a beach place, anyway, so not wearing any shirt is typical. Since the heat was quite unbearable, Chito would just wander around with his shorts and slippers all day and all night, even during party hours.

“When I came back to Manila, one bartender in La Union came for an event and asked, ‘bakit hindi ka topless? (why are you not topless?)” Chito said. He then asked the event organizers if he could take his shirt off and they agreed. “That was the first time that I was topless in Makati. It was an event for an alcohol brand. Then it started happening in different bars and that’s how the nightlife knew about it.”

He even recalled that when he used to session as a drummer for the band She’s Only Sixteen, his friend Roberto would require him to be topless too. So practically, every event that Chito would attend, people would tell him to take his shirt off.

Please take note that he’s only doing this in places where he’s allowed to be topless. It’s usually when bar owners and event organizers would approve or if he’s in La Union.

We asked him if he has ever tried doing long rides shirtless. Apparently, since he’s just doing urban cycling, he’s not yet able to do it. But he really wants to, it’s on his list.

“It’s not allowed here in Manila, you’re not allowed to be topless even if you’re driving. It’s public indecency,” he said. “So my plan is when I get to La Union, I was going to have my topless riding. As in you’re allowed there because we’re at the beach.”