Eugene Cañelas resisted the idea of learning how to ride a bicycle when he was young because he got traumatized after a bad fall. And when his friends started teasing him for not being able to cycle, he promised himself that this activity is not something essential to learn. 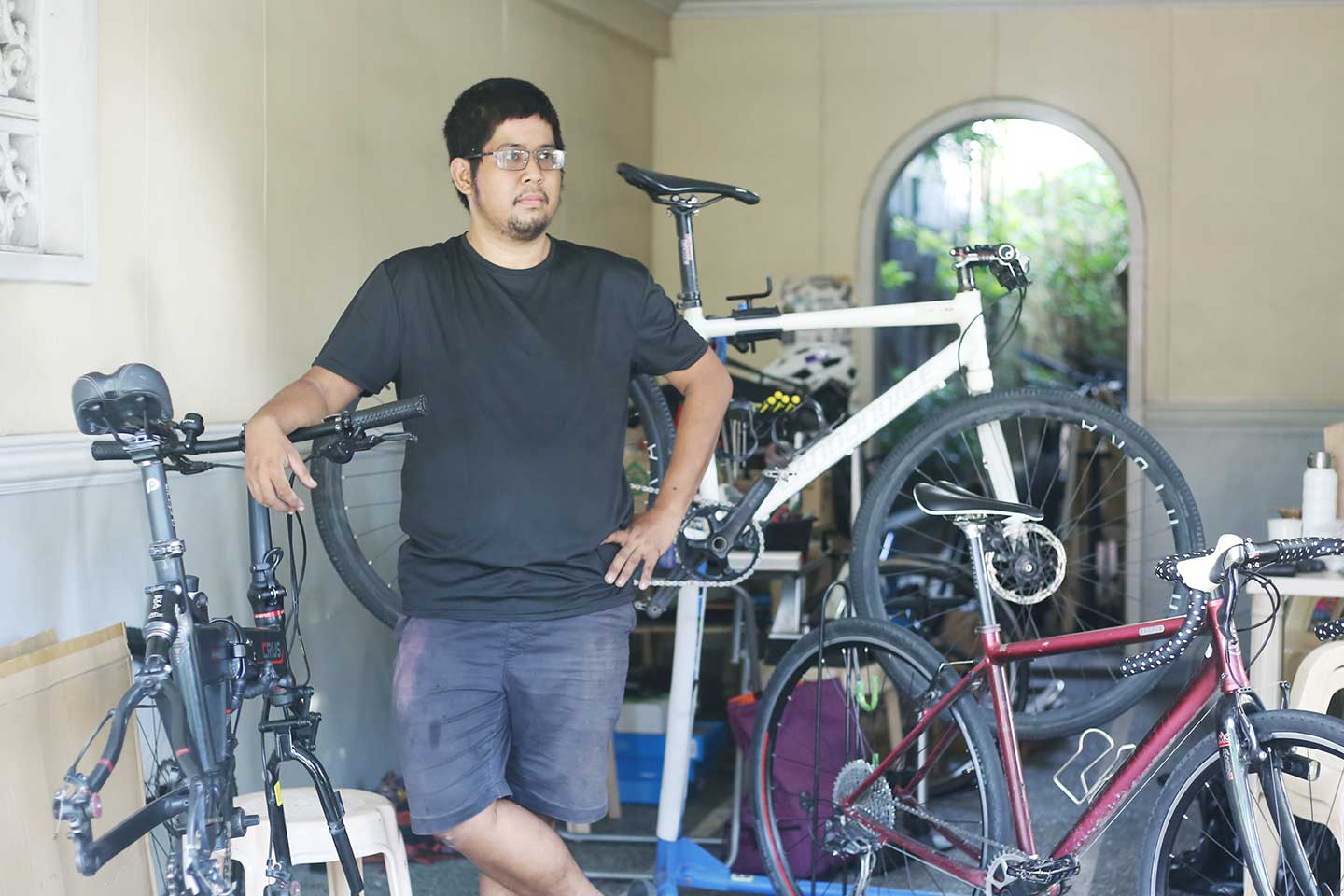 Around 20 bicycles were parked around Eugene Cañelas’ house in Quezon City when we arrived that afternoon. We saw him fixing a bike, trying to keep up with his backlogs after a week-long hiatus. He came from a “soul searching” cycling trip in Subic, he said.

Eugene is a bike mechanic and builder who’s been very busy with repairs and builds since the pandemic. For eleven years, he’s been very active biking too — from bike commutes, trail rides to exploring different kinds of cycling. But believe it or not, he only learned how to ride a bicycle a few months before graduating college in Baguio.

“It’s funny kasi never ako nag-bike noong bata ako, natuto lang ako mag-bike noong college. As in totally, hindi ako marunong mag-bike noon,” he recalled. It was thanks to his friend who left his bicycle with him one weekend and pushed him to try learning how to ride it.

It feels surreal, he mentioned, that he only started cycling in 2011 considering the things that he does now. According to Eugene, he resisted the idea of learning how to ride a bicycle when he was young because he got traumatized after a bad fall. And when his friends started teasing him for not being able to cycle, he promised himself that this activity is not something essential to learn.

His first bicycle was a mountain bike that he used for his commutes from his dormitory to school. He chose this bicycle because there are two routes he can choose going home: a twenty-minute trip along the main road or a five-minute trail ride inside Camp John Hay. He always chose the latter.

The cyclist consistently biked, even when he got employed as a teacher in Subic. He would only take rest days but will still continue to cycle. It was only during the lockdown when he was forced to ride a bicycle for a long time. His life became sedentary, playing video games most of the time, because his work was halted too.

If Eugene had to choose one good thing about the pandemic, it would probably be the birth of Bike Wrench PH, his bike repair and build shop, and everything that’s connected to it.

From doing free work for frontliners, he started accepting repairs for other individuals who were cycling for leisure. It all started with friends, got referred to other people and then he expanded his network. Since it kind of became a job, he started to create a social media page called “Bike Wrench PH” to reach more customers.

So why did he choose that name? During his early repair days, he had an Australian client who called him a “good bike wrench.” Interestingly, the Reddit thread that he was browsing for maintenance was called “Bike Wrench” too. Eugene thought that it must be the name for his shop.

He told us that repairing bicycles came out of necessity. When he started cycling, he never cared about his vehicle: he’d leave it under the rain, would not mind rusty chains or simply and would just ask his brother to fix things for him. When his sibling got frustrated with Eugene’s attitude, he left him attending to his own bike.

From being a self-taught repairman, Eugene enhanced his knowledge with bicycles through continuous learning. Since he’s in the field of Computer Science, he has this discipline of following up with the latest trends and he recognizes the changing technologies. This pandemic, he managed to get a certification from Shimano in maintaining mountain, gravel and road bikes.

When he’s not at his repair station, he’s out with a bicycle. He likes to try various kinds of biking — he’s sometimes doing trail rides, city riding and long-distance cycling, among others — so he can be able to relate to his clients.

He’s going full time with bicycles, he told us. Eugene said that he’s glad that he’s able to find work that’s fulfilling and at the same time can provide him enough to pay his expenses.

“I’ll be devoting my time to bike-related stuff, not only for my shop but may iba rin akong collaborations with other bike shops. Basically to train their mechanics. Eight years na akong teacher but as I move on, the teaching is still there,” he said.