Ride with Pride: Why LGBTQIA+ allies are important

Despite the homophobia, gender-related violence, transphobia and discrimination, it’s positive to know that there are still biking communities who are open and accepting to the LGBTQIA+ community. 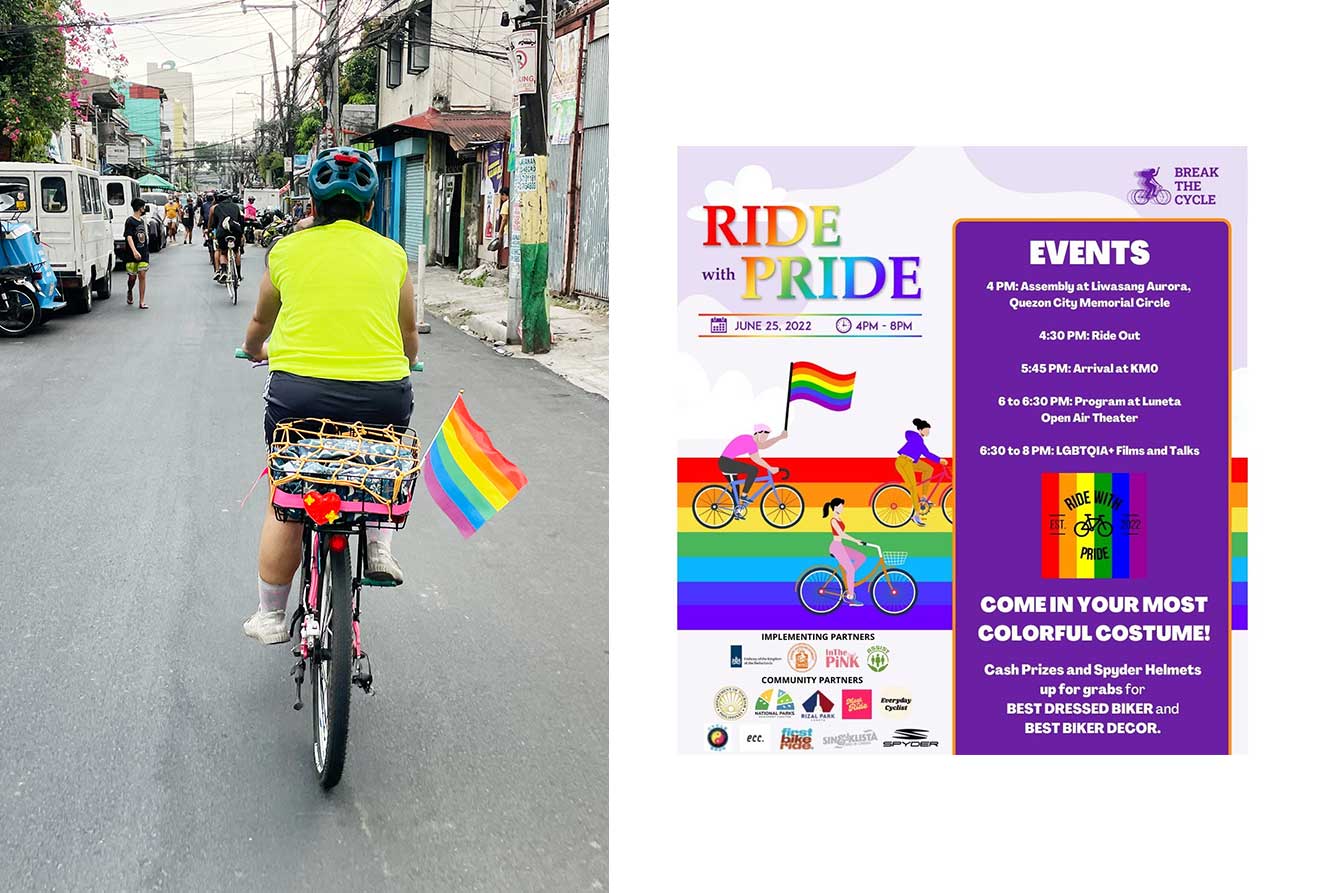 There were around 40 cyclists biking around Metro Manila last June 18, visiting different cafes and establishments, with the goal of educating each other about issues of the LGBTQIA+. But they’re not all members of the queer community. In fact, most of them are straight individuals.

That day was the inaugural ride of “Rainbow Ride,” the cycling event organized by LGBTQIA+ activist and cyclist Mark Lacsamana. According to him, he wanted to arrange this event because he felt so excluded growing up in many things like sports and social circles that were dominated by heterosexual males. And at least now, in the cycling community that he belongs to, he felt welcomed.

Cycling is a male-dominated activity, really. But this pandemic, Mark has seen that biking became more inclusive. This has been his cue, an inspiration, to organize the Rainbow Ride. And for its initial run, the bikers who participated were mostly allies.

“I think allies joining this kind of event is super important because cycling is such a cishet-male dominated hobby and I can understand how unwelcoming it can be sometimes and how the masculinity can feel unsafe and threatening for queer people,” Mark said.

“Getting straight allies to understand these Sogie (Sexual Orientation and Gender Identity Expression) basics helps them understand what it means to become a better ally to queer people that it isn’t just about calling yourself one but it’s about the work you need to do.”

In Mark’s community, which is accepting of the LGBTQIA+, allies still admit that they still have a lot to learn about gender and Sogie. Most of them expressed gratitude that events like the Rainbow Ride gives an opportunity for them to be educated on issues and to support this minority in the society.

After the ride, we had a brief conversation with three female cyclists — Celine Mallari, Ysa Alvares and Ally Alvares — who participated in the event.

“As an ally, standing for them makes them feel that they’re not too alone. They know that we are trying to understand them,” Ally said. Her twin Ysa agreed, “We’re the ones who are supposed to empathize with them because we’re not part of the LGBTQ.”

And true enough, many of those who were in the ride understood issues that straight people were unaware of. It’s really good that conversations like this ae not only limited to members of the LGBTQIA+ community but also to the general public so they can understand and emphatize.

“Statistically, percentage of heterosexual people is still larger than the LGBTQ and that’s like a huge reason that a lot of stigma still exists. It’s still a relatively new thing to be accepted as an LGBT person, in a lot of cultures around the world,” Celine said.

“So how are people going to be accepted if allies are not part of the conversation? How are you going to educate people who are not LGBT if you’re not going to include them? And it involves making them allies also or it involves allies speaking up because it’s also an experience.”

Juancho Agoncillo from bike duo Everyday Cyclist PH was one of the route leaders of the Rainbow Ride. From the point of view of a cisgender, he recognizes his privileges. He believes that it’s important to help the minority to be protected from violence and discrimination.

“I participate in this initiative to support my non-binary transgender younger sibling. I need to show them that they are safe with me cause I love them. And if this side of mine can be extended to more people who can be allies, then why not?”

On June 25, along with the big pride events happening around the Philippines, groups of cyclists are also expressing their support to the LGBTQIA+ community by organizing a group ride called “Ride with Pride.” They will marshall a pride march in Quezon City and will head out at 4 pm cycling to Luneta for a short program.

The “Ride with Pride” was initiated by cycling advocate from Bikers United Movement Ann Angala, who is also an LGBTQIA+ ally. She then tapped First Bike Ride and other bike groups Everyday Cyclist PH, Esteban Cycling Community, Meet and Ride and Break the Cycle PH in this endeavor.

Ann started as an advocate of women empowerment. And after being in the advocacy of sustainable mobility, she wanted to support other groups as well.

“While working on mobility and women issues, I realized that there is a parallel sector that needs assistance. So now we do not only focus on women issues but all gender and mobility issues should be addressed. Sustainable and inclusive mobility for all Women, LGBTQIA+, children, PWD, the elderly. Everyone should have equal rights in transport,” she said.

The advocate added, “I believe that everyone should hear the gender issues and abuse the LGBTQIA+ community is experiencing on the road, just like the women, PWD, etc… There are many layers in the mobility ecosystem that need amplification and solutions. A bike ride such as this one is a vehicle to attract, engage and a platform to voice out concerns.”

Cycling is an inclusive activity and it’s very welcomed that communities have been very supportive in pushing for the rights of others like the LGBTQIA+ community. Events like the Rainbow Ride and Ride with Pride are testaments that there is still a safe space for the queer in biking.

Despite the homophobia, gender-related violence, transphobia and discrimination, it’s positive to know that there are still biking communities who are open and accepting to the LGBTQIA+ community. There are hopes that through these initiatives, more people across all genders will be encouraged to ride a bicycle.