Veteran journalist Howie Severino tells us that ‘cycling is humbling’ 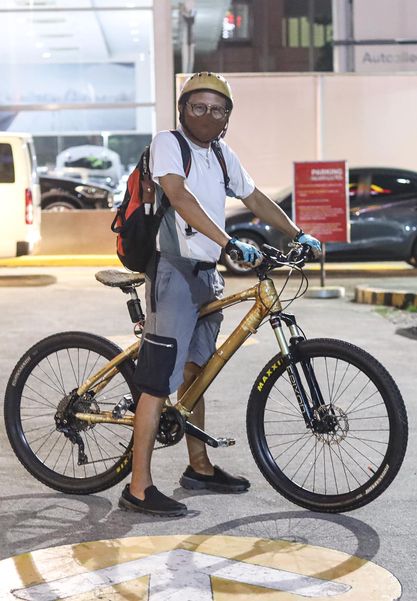 Conversations with journalists are fun—you’ll learn a lot of things and the stories they tell are incredibly engaging. It’s more enjoyable when you ride a bike with them.

We had a bike ride with Howie Severino a few nights ago in Quezon City and many stories were told that evening. For example, he shared his interesting cycling adventures in Metro Manila that landed on the news.

With his trustworthy Bambike, Howie led our group in navigating the streets of QC—he showed us interesting spots and guided us to convenient roads. We were with the cool cyclists of Juan Portrait that night.

He noted that a cyclist is humble because he knows that he’s the smallest vehicle on the road yet he also recognizes that he’s doing good things such as saving space and being eco-friendly.

Howie has been riding a bicycle for a very long time. He recalled that back when he was in Ateneo high school, he was the only student who had a bicycle inside a dorm room. Until now, this journalist still uses his bicycle regularly.

There was even an instance back in 2016 when he figured in a minor accident. He was cycling to work from Malate to GMA in Quezon City when a jeepney accidentally hit him. He was fine but Howie was not able to anchor live in his show. However, his bike story became part of that day’s broadcast.

Last July, Howie was briefly detained because the police caught him not wearing a face mask outside a store in Quezon City. It was because he was having a drink during a bike break.

Despite these incidents, this journalist continues to ride a bicycle. We asked him why he’s still doing it and he gave us four reasons.

“Ang sarap mag-bike. Pangalawa, it’s a statement of belief. Ang sarap din ng feeling that you’re doing the right thing,” Howie said. “Pangatlo, it’s practical — I can get to urban destinations faster and it’s usually easier to park. And I don’t spend anything to travel. At pang-apat ay camaraderie.”