This doctor may look like a long-distance bicycle tourist, but he’s not 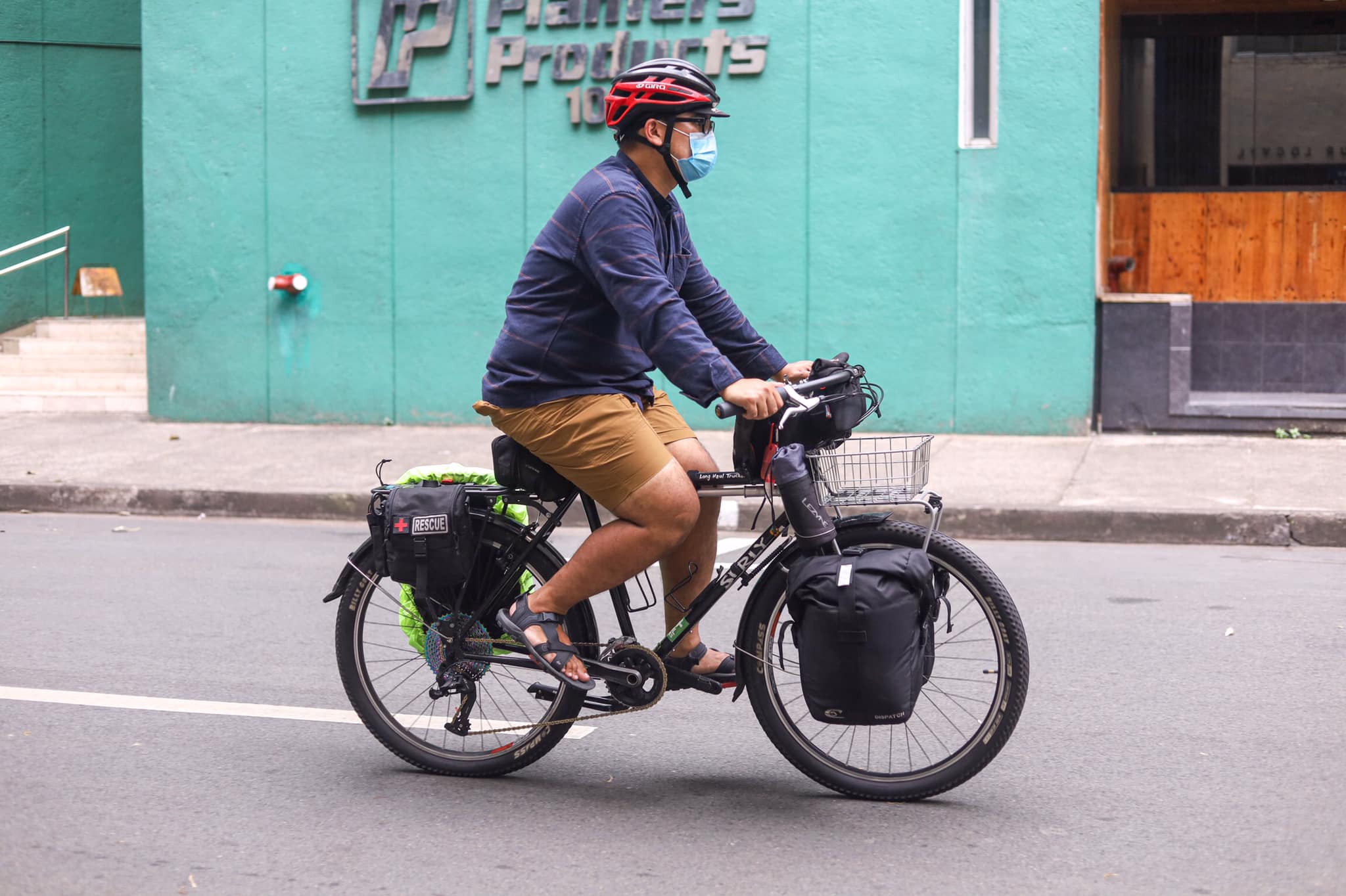 He’s actually bike commuting and he got everything he needs on his ride.

There were eight bags attached to Andro Umali’s bicycle, a Surly Long Haul Trucker, when we met him one morning in Makati’s Esteban Street. Aside from these, there are other things in it too like bike accessories and cool stickers.

It looked pretty heavy but this biker moves with ease, casually enjoying his ride like he’s carrying nothing.

“My bike is the epitome of my commuting because everything’s there.” Andro told First Bike Ride. “I designed it to be heavy but when you ride it, it’s not heavy to ride.”

This cyclist usually brings a pannier backpack, located beside the rear wheel, that holds his everyday carry—two changes of clothes including his work attire, toiletry kit, bike accessories, tools and other essentials, among others. During our meeting, he had two front panniers which held the things that he needed for that day’s errands and a first aid kit. His other belongings were strategically placed in his other bags: a seat pack, two front bags and a stem bag.

No doubt, his bike is an eye-catcher. Andro quipped, “I realized that people recognize my bike, not me.” True enough, almost all of the cyclists who happened to pass along Esteban that time mentioned that they identified his bicycle first before noticing Andro.

Andro is an Emergency Medicine doctor and is also one of the heads that run MNL Moves, a community that focuses on active mobility in the Philippines. And he’s doing an amazing job—from being on the frontlines this pandemic to his advocacy of moving everyone safer and easier.

He recalled that he started using his bicycle as transportation when he was studying for the physician licensure examination in 2016 while doing his hospital internship in Pasig City. He lives 2.5 kilometers away from work and his one-way car commute would take 45 minutes to an hour.

A lot of his time was wasted waiting in traffic, it could have been used for better things like studying or taking a bit of rest. Andro needed to solve this problem and thought of borrowing his brother’s folding bike.

“I had nobody to teach me how to ride urban, I only knew how to ride a bike but not how to ride it in a city. I read about it, practice nearby, practice on the weekend, practice the route and eventually, I got on it,” he said.

This cyclist started minimizing his car use until he finally decided to give his car to his brother in exchange of using a bicycle for his commutes. Andro told us that he became really passionate about cycling as transport when he got into Emergency Medicine. He started meeting more bike commuters and got involved in many conversations, which resulted in him being a mobility advocate and eventually doing work for MNL Moves.

The foundation of Andro’s advocacy comes from his knowledge as an Emergency Medicine physician and his experiences as a daily bike commuter. However, he thinks that it’s not enough and that he lacked more depth.

“As an Emergency Medicine physician, I deal with road safety and that’s one reason that links my profession to my passion,” he said. “And then I told myself, I don’t have any other qualifications to talk about mobility aside from being a doctor and a bike commuter. So I took up an online course and I now have a certificate on Urban Transportation Mobility.”

Now, Andro continues to learn about mobility from data and other academic materials. Partnered with his knowledge from Emergency Medicine and personal experience as a bike commuter in the country, he’s definitely more equipped when he talks about his advocacy.

During our interview and whenever we see his posts on social media and other online discussions, we admire how Andro presents his arguments to push inclusive mobility. It’s usually backed with facts, framed in a manner that’s easily understood by many, very helpful and educational but not intimidating.

“I want to go into touring. Once Covid is better, when the restrictions are down, when more people are vaccinated, when it’s really safe to travel. I want to go touring locally,” he said. “Exploring the city with a bicycle opens so much, what more if it’s the whole country.”