“I realized that the quality that we do and the service that we do on an aircraft can be applied to bikes. Because that’s the main point why you maintain it, why you clean it, for the bike to be a lot safer, much more reliable. I applied the standard in aviation to bikes.” 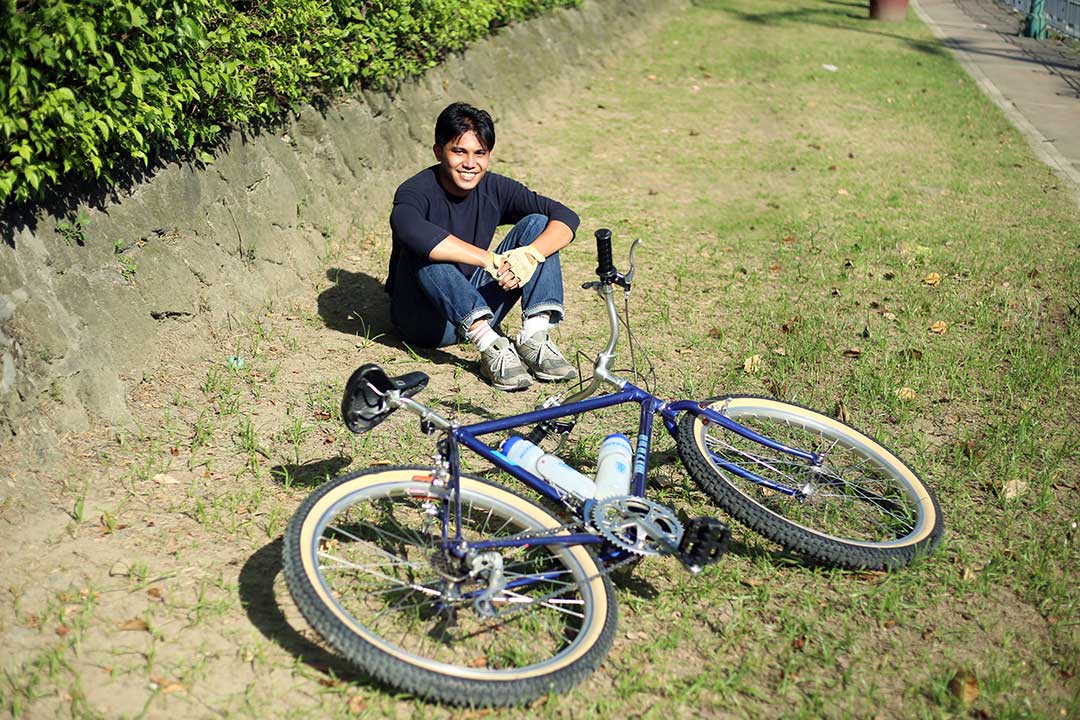 Robert Samson diligently removed the grease from every tooth of his client’s chainring. When it’s time for him to put lube on the chain, he patiently applied the drops on every single link. He scrutinized every ball of the bearing and upon seeing a problematic one, he recommended a replacement.

Apparently, his careful handling of the parts and the meticulous work can be attributed to his background as an aircraft mechanic.

Rob is the guy behind Bert’s, a shop that focuses on detailing vintage bikes. He also services modern bicycles and can do other jobs like assembling and restoration but he told us that he’s more known by his network for working on retro bikes.

Well, he’s really drawn into the vintage style. According to him, his influences in terms of clothing, design and “basically everything” are all geared towards the classics. Interestingly, his bicycle is a 1986 Miyata Terra Runner that he personally restored.

And mind you, it’s not just the frame that has this classic vibe in it: look into every detail of the bike and it will take you back during the 80s and 90s. Our personal favorite is his grips because nostalgia kicked in as it resembled what we had with our old bicycles when we were younger.

The cyclist learned cycling when he was a kid — he would rent a bike from his neighbor before his dad bought him his own. He was biking most of the time during his adolescence and even assembled one from scratch back in high school.

However, this bike that he had built got stolen. This discouraged Rob and took a hiatus in cycling. He got back after graduating from college.

“I studied aircraft maintenance in an aeronautics school and my fondness for mechanical stuff was still there. But not with bikes. I got into aircraft, automobiles and motorcycles until I graduated and my dad gifted me a vintage bike,” Rob recalled. “I told myself that once I get my first job, I’ll restore this. That’s when I got interested in bicycles again.”

It was only during the pandemic that he concentrated on restoring bicycles. He said that he was into vintage motorcycles before the lockdown. However, since there were strict restrictions and he can’t really go out to ride, his attention was diverted into the human-powered vehicle.

“The most convenient thing that I could do at home back then was just fix bikes. I can just work in my room because I have tools. Unlike motorcycles, I need to work outside and it’s noisy,” he said.

His shop Bert’s was an accident, Rob quipped. He was just posting photos of his bike project and friends suddenly noticed. After some time, he was approached by his peers asking him if he could fix their bicycles. Since he had free time and he liked restorations, he accepted the jobs.

From servicing bikes of friends and people from their network, Rob mentioned that he’s now accepting work from strangers, especially those who see his posts on Facebook and Instagram. However, he acknowledged that turnover time can be slow because his process is very rigorous and he makes sure that he completes a neat job.

While he’s very knowledgeable in fixing airplanes because of a formal education, he admitted that he just learned restoring bicycles through manuals, online tutorials and by asking questions to other bike mechanics.

He added, “I realized that the quality that we do and the service that we do on an aircraft can be applied to bikes. Because that’s the main point why you maintain it, why you clean it, for the bike to be a lot safer, much more reliable. I applied the standard in aviation to bikes.”

(Bert’s started in cosmetics. My polishing work started with the parts that I wanted to sell but I don’t want to sell them in bad condition. So I tried to polish, I tried experimenting first. My detailing was influenced by Gary’s Projects. I got tips from Siraniko. I also relied on ParkTool references.)

Rob remembered that he had a hard time during his first bike restoration project. It was mainly because he didn’t have the right and enough tools. As he got more projects and learned from the experts, he’s now confident and his clients can attest to his capabilities.

Perhaps one of the biggest lessons he learned in this business is investing in the best tools. He said that he used to have bad instruments that made it harder for him to fix bikes. Now, he saves up money to buy the proper machines that he’d use for work.

We asked him about some of the best tools that he had invested so far. We thought that he’d highlight the big machines and other electric-powered apparatus but he mentioned simple but efficient pieces. He said that his favorites are a set of hex wrenches that he bought from the United Kingdom, Knipex pliers and a tool box drawer where he can conveniently arrange and get his items.

Before we ended our interview, Rob interestingly noted that he envisions Bert’s as a shop recognized for the quality of work it produces.

“Basically, ’yung goal for Bert’s is just to provide better services, specifically on vintage bikes. I want it na mas tutok sa products, mas tutok sa clients rather than just making money. When you put up a shop, the tendency is towards money-making since it’s a business,” he said.

(Basically the goal for Bert’s is just to provide better services, specifically on vintage bikes. I want it to be more focused on products, more focused on clients rather than just making money. When you put up a shop, the tendency is towards money-making since it’s a business.)