These rules got a fair amount of cheers and criticisms online, especially regarding the mandatory helmet use and obstructions. 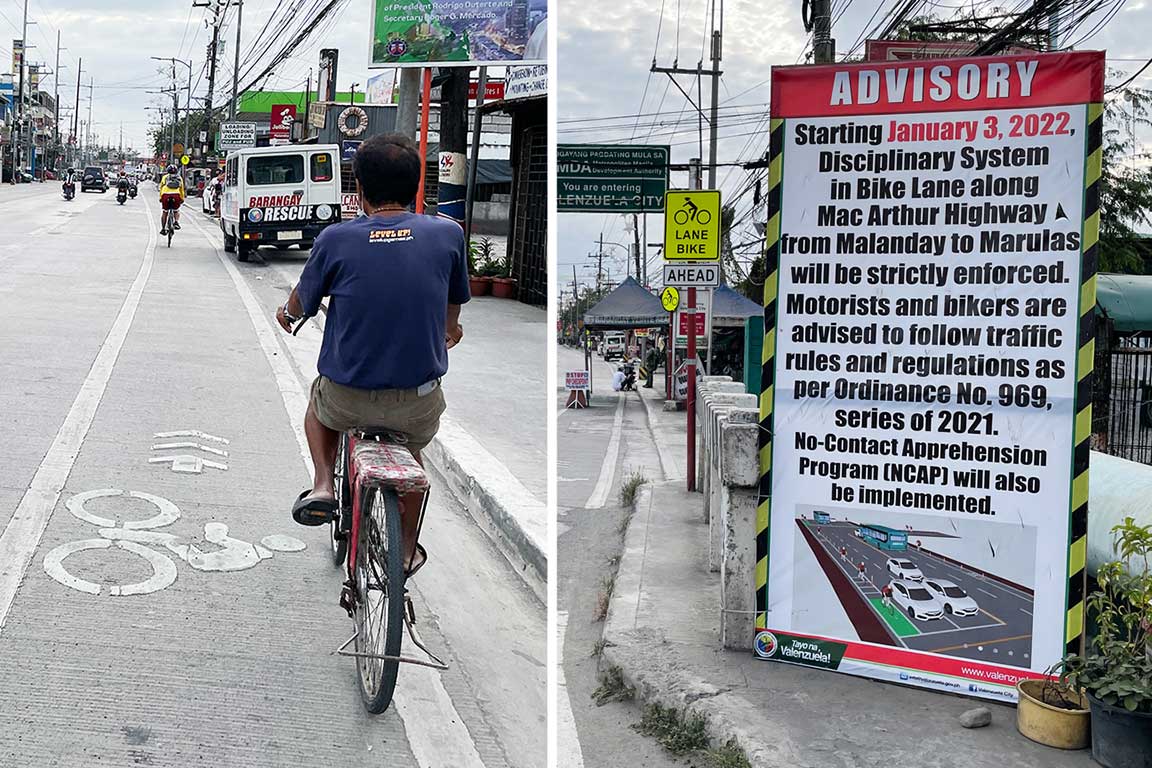 Road rules for bike lanes and cyclists will strictly be implemented along the stretch of MacArthur Highway in Valenzuela (Malanday to Marulas) starting Monday, January 3.  This is a major thoroughfare that connects Metro Manila to Region III.

According to the city’s Ordinance 969, active transport users such as cyclists and e-scooter riders are only allowed to be on the bike lane. Motorists like trucks, cars, buses and motorcycles are not permitted to enter these lanes.

Active transport users who will violate this rule for the first time will receive a warning while repeat offenders will be fined 200 pesos. Violators shall have a valid government-issued or student ID too or else, their vehicles will be impounded.

Valenzuela City’s MacArthur Highway only has painted bike lanes. If the goal of this ordinance is to protect the road users, especially the vulnerable ones, separations such as bollards or small barriers will make sense because they have been proven effective in safely segregating motorists from active transport compared with road markings.

After all, the point is to make bikers stay inside their lanes and keep the motorized vehicles out.

Helmet use becomes mandatory (the penalty for not wearing one is 350 pesos) and there should be working brakes and warning devices. From 6pm to 6am, bikes and e-scooters should have lights. Cyclists and e-scooter riders should always hold their handlebars properly.

Bikers shall have a permanent seat on their bicycles. They, including e-scooter riders, should only ride in one line. Those who will violate these rules will be fined 500 pesos.

They are also required to follow the traffic rules designed for motorized vehicles and are not permitted to counterflow. Active transport users are only allowed to leave the bike lane when there’s obstruction on the way.

A violation has a corresponding fine that ranges from 200 to 500 pesos.

First Bike Ride passed along MacArthur Highway on New Year’s Day and we have observed that bike lanes are fairly respected by motorists. A few motorcycle riders pass the space dedicated to active transport to overtake other cars or while waiting for the traffic light. Nevertheless, they follow rules when an enforcer is in sight.

We met a cyclist, who we refuse to name, biking along MacArthur Highway without a helmet. He lives in Valenzuela City’s Brgy. Pulo. During that encounter, two days before the implementation of the ordinance, we asked him if he knew about the new rules. He said that he had no idea about it.

Jun Reyes, who lives in Guiguinto in Bulacan, was also passing by MacArthur on a bicycle. He’s on his way to his family in Novalichez. He was not wearing a helmet that time. We asked him if he knew about the ordinance.

Patrick delos Reyes gets to bike along Valenzuela’s MacArthur highway even though he lives in Quezon City. He’s positive about the ordinance.

“‘Yung guidelines look promising kasi may clauses for motorized vehicles entering the lane. For me, ito sign na maganda direction ng LGU. As long as implementation is effective and fair for all parties,” he told First Bike Ride.

The ordinance and fines for cyclists got a fair amount of cheers and criticisms online (just like other cities in the Philippines like Mandaue and Quezon City), especially regarding the mandatory helmet use and obstructions.

While the other parts of the city enjoy less-restrictive rules for bikers because of their environment is safer — slow streets and no intimidating trucks — we hope that the ordinance would make Mac Arthur Highway a secured space for everyone.