Cyclists, pedestrians and those in motorized vehicles who follow road rules can be a victim of these reckless drunk drivers. 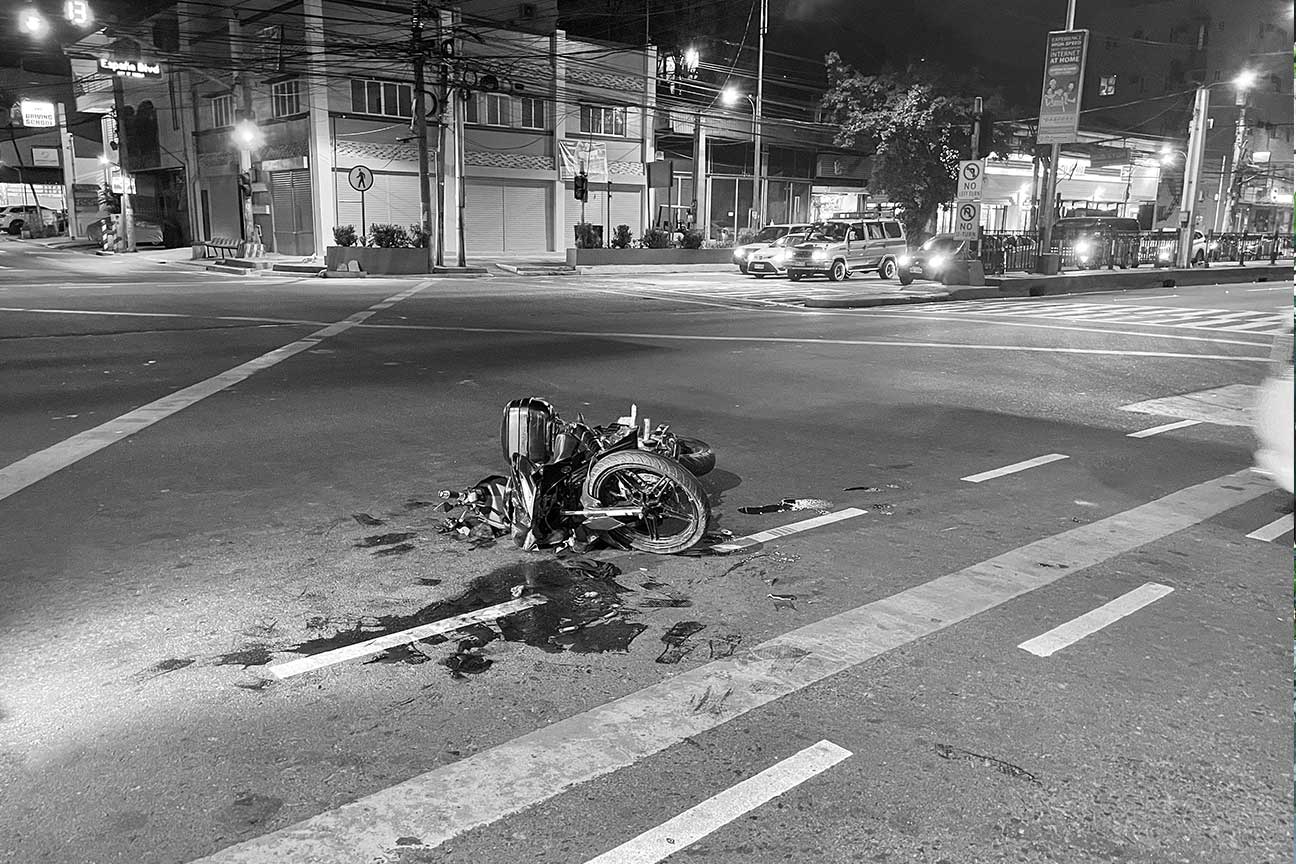 If I could not have pedaled faster, that moment could have been my last.

It was around 12:40 am that morning, February 25, when the traffic light on our side in Maceda (northbound) turned green. I was pedaling my bicycle in the middle of the road, ahead of the line, when I suddenly saw from my peripheral vision that a vehicle was speeding up on the southbound lane of España Boulevard.

My instant reaction was to speed up because I knew that the motorcycle driver was beating the red light and that he’ll not stop anytime soon. In an instant, after the motorbike passed behind me, the driver and his passenger crashed into a fish truck.

The next thing I saw was a destroyed motorcycle and the bleeding driver. Blood was all over the floor and it was continuously gushing from his head — he might have been spitting blood too. Our initial reaction was to call the ambulance and make sure that the guy stays still to prevent further complications. We have to keep the driver alive.

Police came fast but the ambulance took too long to arrive. When the driver seemed better, the events that occurred hit me: if I was slower, the motorcycle could have crashed into me and I could have sustained serious injuries. Or worse, I could have been dead.

According to the police officers, the motorbike driver and his companion were drunk. Judging from their stature, they looked intoxicated. Based on the interview by news show Unang Hirit, the two came from a friend’s party.

Drunk driving appears on the news many times this year. And mind you, it’s just February. In January, a cyclist was killed in Pateros because of a drunk driver. Last week, three Philippine Air Force personnel were burnt and died when their drunk driver slammed the car into the concrete barriers of EDSA which also caught fire.

This month, an actor crashed a garbage truck along Osmeña Highway. A respondent said that he was drunk. There’s also an incident where a 23-year-old guy hit motorcycles and killed two people along EDSA — he appeared to be intoxicated. He also destroyed the concrete barriers of a bike lane.

As restrictions of the pandemic eases and the number of cases turn low, more people confidently go out — some drink and drive. Our roads have become more unsafe, compared to the previous years of the community quarantine, because of these reckless drivers who push to drive vehicles while under the influence of alcohol.

Nevertheless, drunk driving has been a big problem in the Philippines even before the pandemic. This has to stop and it looks like the government is not doing anything proactive to solve this problem.

Cyclists, pedestrians and those in motorized vehicles who follow road rules can be a victim of these reckless drunk drivers.

In the newscast, the passenger of the motorbike told the reporter that they were driving from Maceda Street. He was lying, an act that could have put the innocent truck driver in deep trouble. I was there and I witnessed the whole incident: the two were in España.

The motorcycle driver was overspeeding and he was beating the red light. I, along with the truck and other vehicles on Maceda that morning, were already in the middle of the road when they crossed. They were too fast and it was too hard for everyone to make a full stop in the middle of the intersection.

Were there CCTV footage? According to the police, the CCTV in that area is not working. That’s pretty disappointing. Some officers insist that I make an official investigation statement to help the truck driver get away from trouble since there’s no video evidence that could be presented in court should there be any further legal actions.

If you’re out to party and drink, please don’t drive a motorized vehicle because that machine could kill somebody. Have a designated driver take you home.