Is it better to ride a bike in a hot country like the Philippines than in freezing the Netherlands? 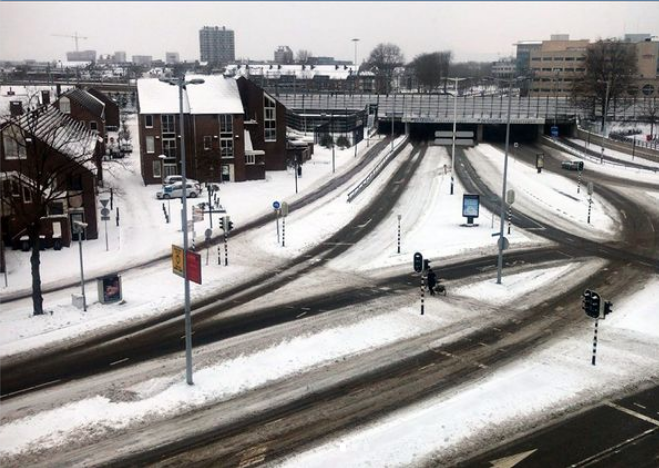 Roads in the Netherlands look like this today. One of our Dutch friends says she prefers cycling when it’s hot over riding a bike in winter.

Well, regardless of the weather, the Dutch people will still ride a bike.

“There is no circumstance in which Dutch people will consider it impossible to cycle,” Danique van der Burg told First Bike Ride.

She sent us videos of the road situation in Utrecht, the fourth largest city in the Netherlands. Cycling may look difficult but the Dutch people are so proactive in making traveling easier for everyone, which includes bikers, pedestrians and car drivers.

Pathways used by the general public like bike lanes are maintained by the government, especially in winter where they immediately remove snow. Meanwhile, citizens take responsibility in clearing the sidewalk in front of their house.

Danique mentioned that what’s hard during winter is that roads can be slippery and people need to properly cover up because it’s freezing. She mentions that she likes cycling during summer even if it gets too hot.

“Heat is not an issue. We also have days of 40 degrees and still everyone is riding bikes,” she said.

“But that’s the nice thing in summer, as long as you’re moving it’s quite cool because you generate wind. It’s only hot when you stop cycling,” she added. “So just cycle slow. That’s fine too and then you won’t sweat.”

This awesome bike commuter also cycled in Cambodia when she worked there a few years ago. Cycling in this South East Asian country can be too hot, just like in the Philippines.

However, she emphasized that the Netherlands can be more advanced than countries in South East Asia in terms of bike infrastructure and upbringing.

“But the difference is that people here learn how to ride a bike when they’re two years old and that traffic is quite organized,” she said. “Where I live, in Utrecht, cyclists rule the city.”

She noted that cars in the Philippines are not used to bicycles, she visited the country years ago. That’s why we need to let motorized vehicles know that cyclists are part of the road and they should be reminded of the road rules—at least the correct ones and not the versions passed through drivers’ word of mouth aka “sabi-sabi.”

It may be difficult to change but First Bike Ride is hopeful—through the help of the government, private sector and the general public—that the Philippines can.

“This afternoon it was snowing, but they already cleaned it now,” she said, telling us the efficiency of Utrecht in terms of maintaining the bike lanes and other roads.

So is it better to ride a bike in a hot country like the Philippines than in freezing the Netherlands? Maybe, if we have the proper bike infrastructure and change the country’s car-centric mentality.