The upgraded Kapitolyo intersection considered pedestrians and persons with disabilities too. Before, people had to climb and cross through the inconvenient footbridge. 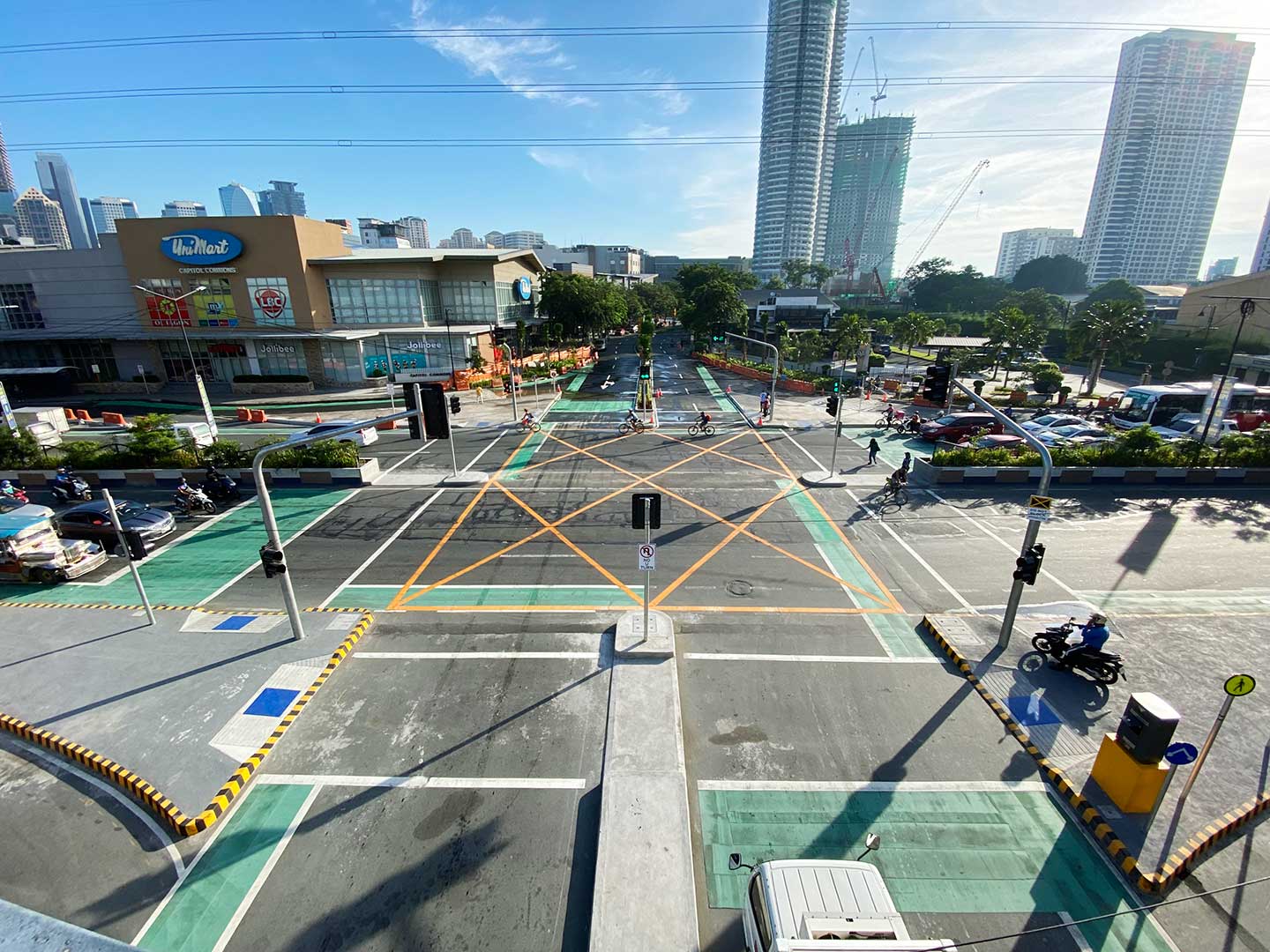 The new and upgraded intersection in Kapitolyo permanently opened yesterday. The local government of Pasig and Ortigas Land redesigned the intersection that used to be unfriendly to pedestrians and difficult to use for active transport users like bicycles and electric scooters.

Cyclists can now enjoy a bike lane, though still painted, when crossing this area in Pasig. Hopefully, a separator will be on its way soon. Bike boxes — or priority areas for bicycles in an intersection — are also part of the new layout. Here, bikers are given an appropriate clearance in front of motorized vehicles. This gives them a safer advantage when turning left.

Bike boxes are the green painted spaces where cyclists can position themselves in front of motorized vehicles during the red signal phase. It’s an exclusive area for bikers and active transport users.

The upgraded Kapitolyo intersection considered pedestrians and persons with disabilities too. Before, people had to climb and cross through the inconvenient footbridge.

While it’s not yet in its complete form during its official opening day, Pasig Transport said that “it will feature the country’s first LGU-led protected bike lane with integrated intersection treatment that will guide turning bikers and reopen at-grade crossing for pedestrians.”

We asked two young bike commuters, Elijah Go Tian and Justin de Dios, who were able to check this newly built urban infrastructure and asked for their comments about their cycling and walking experience in the area.

Eli works as a transport planner. Meanwhile, Justin is a junior architect who advocates cycling through his social media page Manila Commuter.

How was your experience using the new Kapitolyo intersection in Pasig?

Justin: It was easier to navigate compared to the adjacent intersection — Shaw cor. Meralco Ave. It felt safer overall due to the clear signaling. We crossed it both as a pedestrian and a cyclist.

Eli: To be honest, I was a bit afraid at first mainly because of the signal phasing. But we were actually given an adequate amount of time to cross the intersection. It was also quite exciting since you could actually see the huge amount of fellow cyclists around you as well as a local government unit that not only recognizes cycling as a mode of transport but prioritizes it as well.

How was it riding in that area before the upgrade?

Justin: Riding the area used to be a chore, you’d have to take a U-Turn +/- 500m away on bike to cross the street. This is more direct.

Eli: Like the rest of Shaw Boulevard, it was chaotic. Not only couldn’t we turn right to either Kapitolyo or Estancia but we would also have to take a longer route using the next intersection. That’s unless you prefer carrying your bike up the elevated crossing. Plus, our visibility on the other intersections was very poor especially if we needed to turn left.

What are the things that you like about the new Kapitolyo intersection?

Justin: It serves pedestrians. The standards are mostly in-line with NACTO guidelines on street design. It might need improvements but it’s the closest we have to something that’s cycle and pedestrian-centric.

Eli: As a cyclist, the bike box really helped us become more visible to all the other road users. As a pedestrian, the at-grade crossing makes it a whole lot easier, in terms of time and convenience, to cross the street.

It’s not yet complete and necessary changes can still be applied. As a user, did you notice anything that can still be improved?

Justin: Signaling. Eli and I observed that pedestrian crossing signals were very short (10 seconds to cross 4 lanes of traffic) and the gaps before pedestrians are allowed to cross are too long 99+ seconds on some stretches. Here are some of the things that should improve:

Eli: We noticed that the current signal phasing for the pedestrians was too short so that meant some pedestrians either had to run across or had to stop on one of the pedestrian islands. This is a lot safer than the previous layout but it could be better.

Also, it could be better if more wayfinding and markers could be installed to help all road users understand this new design. And lastly, possibly removing the slip lanes in the future in order to decrease the amount of conflict points and amount of times pedestrians will be exposed to vehicles. This would also increase the visibility and safety of pedestrians at the same time.

Should this be done in other intersections or be emulated by other cities? Why?

Jusin: Yes. Pedestrian Safety must come first in all of our urban settings, most especially at conflict points such as crossings and intersections.

Eli: This design should definitely be done in other cities. Maybe even a better version. The reason for that is because the more human-centered or scaled infrastructure we have, the safer it would be for all road users. Plus, it would be easier for people to get accustomed to it if the surrounding cities would have the same design too. This would also help encourage people to bike more since the area on the road with the most conflict points (most dangerous) will now be prioritizing them as well.