I’m happy with my narrow bike tires but I finally chose to switch to wider ones. I feel defeated but I’m glad I made this choice, probably one of the best decisions I recently made. 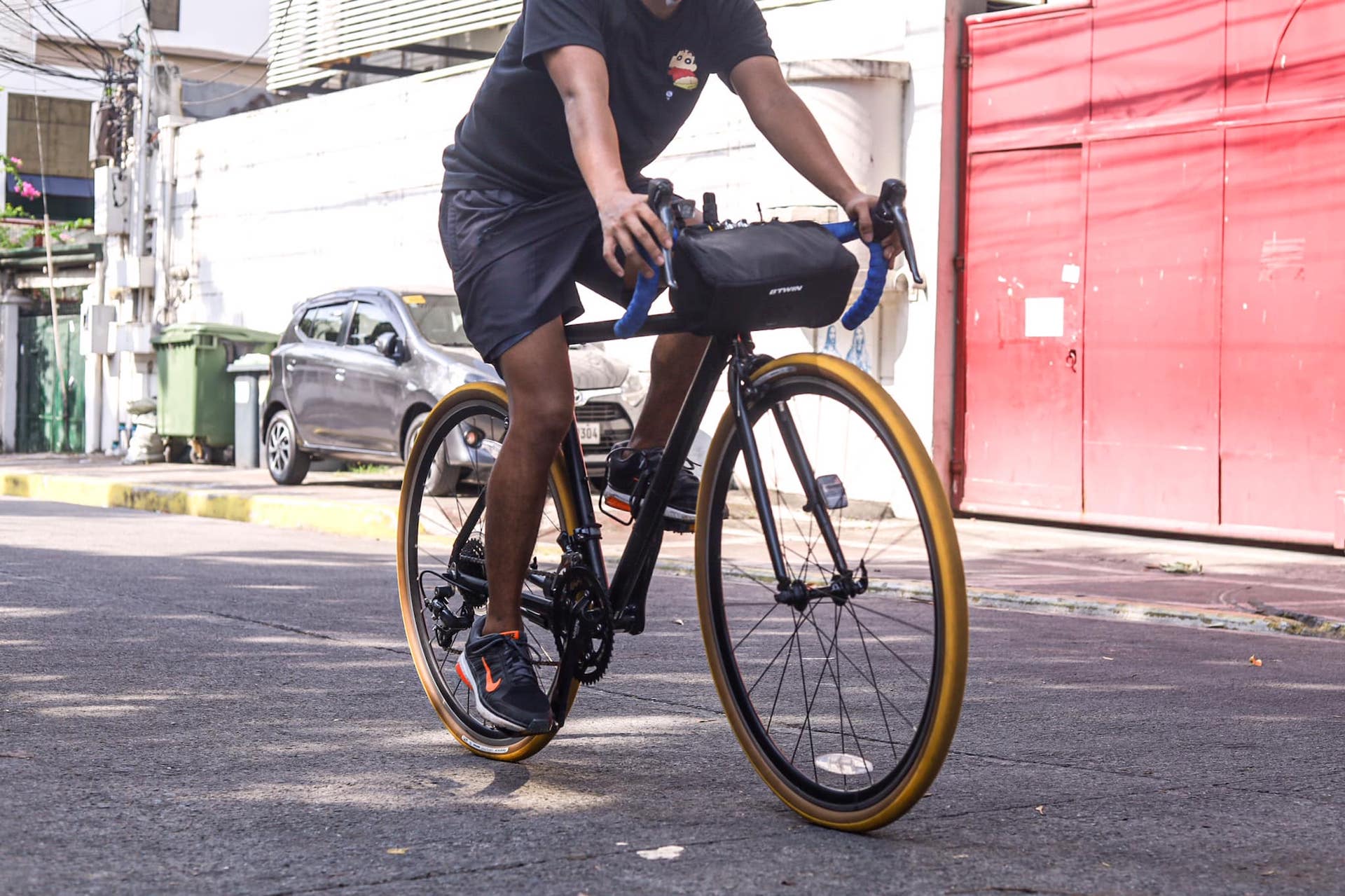 I’m happy with my narrow bike tires but I finally chose to switch to wider ones. I feel defeated but I’m glad I made this choice, probably one of the best decisions I recently made.

The bike that I always use is a black Tern Clutch, something that serves me well for my daily commutes and occasional long rides outside the city. It has 700x28c tires that are very light and they give me the reasonable speed that I need for my trips.

Here’s a quick story. Just after a month of cycling in Metro Manila, I had an unfortunate accident. My front wheel entered a big gap in one of P. Noval’s drainages which made me literally turn 90 degrees, with my cheeks kissing Manila’s pavement. It was dark and I was not able to see the hole. Luckily, I was cycling slow and I was able to quickly use my hand for support. No major bruises and just a sprained left palm that lasted for a month.

“Kapalan mo na ‘yung gulong mo, delikado talaga mga kalsada dito sa Manila. Madaming lubak, hindi maayos at butas-butas.” Those were the ultimate tips of my biker friends, and it’s something that I tried ignoring and resisted for months.

You see, I believe that I don’t want to change my narrow tires because I don’t want to be defeated by Metro Manila’s shitty roads. I know, it’s pride. After all, I’m really happy with my tires’ performance.

The thing is, city roads should be safe for everyone. It shouldn’t have cracks, hazardous drainages, uneven pavements and crazy potholes, among others. All kinds of wheels should traverse streets safely.

Others would argue that what I want is a fantasy, that we live in the Philippines and all I can do is just wish. Well, I should say that fantasy land can be found in Taguig’s Bonifacio Global City and in Makati’s Central Business District. Why can’t we have that nice and safe pavements in all of our roads?

But last month, I made up my mind to change my tires to wider ones. Why? It’s because I got alarmed when another friend who has the same tire size as mine had a terrible accident in a dark bridge in Makati. He slipped on a sandy area which resulted in a bloody and bruised face.

That’s frightening and that was the sign that I needed to give up my pride. I immediately inquired at different bike shops for thick tires, a 35c because that’s the widest that my Tern can accommodate. But sadly, there was none.

You know who’s my savior? It was Marlowe Apeles aka Budol Buddy PH. He had extra 35c yellow Panaracer Gravelking, a limited-edition gravel tire that he ordered all the way from the United Kingdom. This guy has so much bike treasure in his workshop in Rizal.

Marlowe quickly installed the tires with some side suggestions like changing my cogs and redesigning some parts of my bike. Don’t fret, I survived the budol but his recommendations for having a better bicycle are duly noted.

Surprisingly, I enjoyed cycling with wide tires. I feel more secure with my rides, I don’t worry with small road bumps anymore and I think the yellow accent looked nice. It’s more comfortable too. It’s not the widest out there but what’s important is that I’m satisfied.

Is it fast? I ride at a chill pace so it is fast for me.

Did having wide tires solve my problem? Partially. But let’s not forget the real enemy: it’s the shitty roads that continue to put everyone in danger.

First Bike Ride is open for your essays and stories. Just message us for more details!

The writer of this post is Lester Babiera. Haha! He’s been using his bike as his main vehicle for transport for eight months now.