Why was it fun? I felt like a kid again playing under the rain. I was carefree and felt like I had freedom. I guess it also comes with the company I’m with — there was no pressure and everyone’s encouraging. 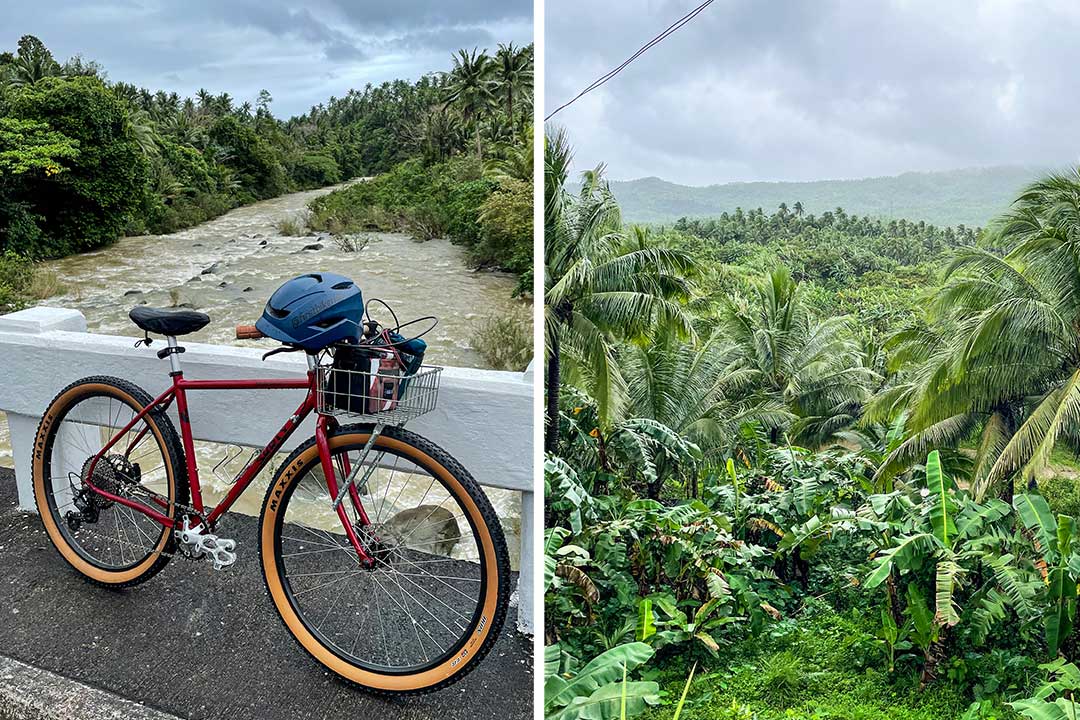 While others would frown and call me crazy for doing a bike ride under the heavy rain, moreover an almost hundred trip with intense uphill slopes, I genuinely enjoyed this trip. Perhaps if I was asked to tell a memorable bicycle experience, this trip would be on top of my head.

The sun did not appear that day. In fact, we were faced with strong winds and heavy downpour in Lucban the night before our actual Mauban loop ride. But we were hopeful that our actual trip would see some nice sunshine and dry pavements around Quezon Province. It did not happen.

I brought my Surly Midnight Special, the red bike with an albatross bar and a wald basket (a carrier that held my Side B Upcycling and Oveja Negra bike bags).

The bicycle withstood the strong winds that aggressively pushed us, it’s like an angry man trying to topple his enemies down. The bags managed to keep my things dry. My gadgets were all wrapped in plastic.

Despite the gloomy weather, the routes were still pleasing as we biked beside lush greeneries and quiet areas. There were a few cars too which made it easier to cycle — the biggest challenge were the slippery roads and the uneven pavement. I found it interesting to see how the locals live, and I sometimes stopped to have a quick chat.

But why was it fun? I was like a kid again playing under the rain. I was carefree and felt like I had freedom. I guess it was also because of the company I’m with — there was no pressure and everyone’s very encouraging. We can go on at our own pace and do whatever you want in the middle of the bike ride with no judgment.

During the whole ride, the harshest moment was on our 45-kilometer mark. We were traversing Mauban town with the blinding rain and we were starting to feel cold. When we arrived at the pier, the violent waves were quite intimidating but no one in the group showed signs of giving up.

It was past lunchtime and our energies were starting to deplete. From Mauban’s town proper, we had to cycle eight more kilometers to this place called “Kap’s Bulalo Mami Goto” because our hosts said that it’s a popular eatery for cyclists.

I ordered so much because I was hungry. There’s lugaw, lechon, tokwa, tapsilog and bulalo. And despite the freezing weather, I also had ice cream.

The lunch prepared us for the final and most physically-challenging stretch of our journey: the 12-kilometer non-stop uphill Sampaloc climb. Luckily, the rain subsided that time. I’m pretty sure that the ride will be much harder if it poured all throughout.

Last year, I did the same trip with the same group. It was also hosted by award-winning writer Joselito Delos Reyes. That was my first bike ride in this province and back then, I still considered myself as a newbie: I brought my Tern Clutch and I was just using its stock parts and very narrow 23c tires.

There were new faces in the group but everyone’s excited as if we’re exploring new routes with a new bicycle. It’s quite refreshing to cycle in a new place, after all. Cycling around our respective cities can be too boring.

My first Mauban loop ride was quite memorable because I had too many setbacks. I had a major fall: I slipped, with my left arm scratching the ground as I tumbled downhill, because the cemented path was filled with slippery moss. My second fall that day was a collision with a friend.

During the 12-kilometer climb, I was so exhausted that I had to walk three times and rest for a long time just to finish. It was pretty disappointing that I always look forward to this revenge ride.

And now, I’m so proud that I have managed to complete the whole loop without falling from my bike. Plus, I conquered the final uphill stretch without resting and walking. It’s something that I want to celebrate because it just showed that I have improved and that I have conquered a fear that I held after the terrible slip.

The trip was definitely crazy but ultimately fun. I was asked by another friend if I’d still do a rainy ride after this trip and without thinking twice, I said I would. I’m soaked and my shoes were squishy but my spirits were high.

Thanks to sir Jowee for being the best host of the trip. He also welcomed us to his small “kubo” which I believe has so much potential to be an awesome lodge in Lucban, perhaps a unique Airbnb that caters to adventurous people who like cozy and quiet places to stay.