The “conyo biker” who regularly bikes to work is an inspiration

He was honest with us when he said that it never crossed his mind that cycling to work and city-to-city rides would be feasible in Metro Manila. The pre-pandemic Justice thinks that a bike is only for exercise and racing. 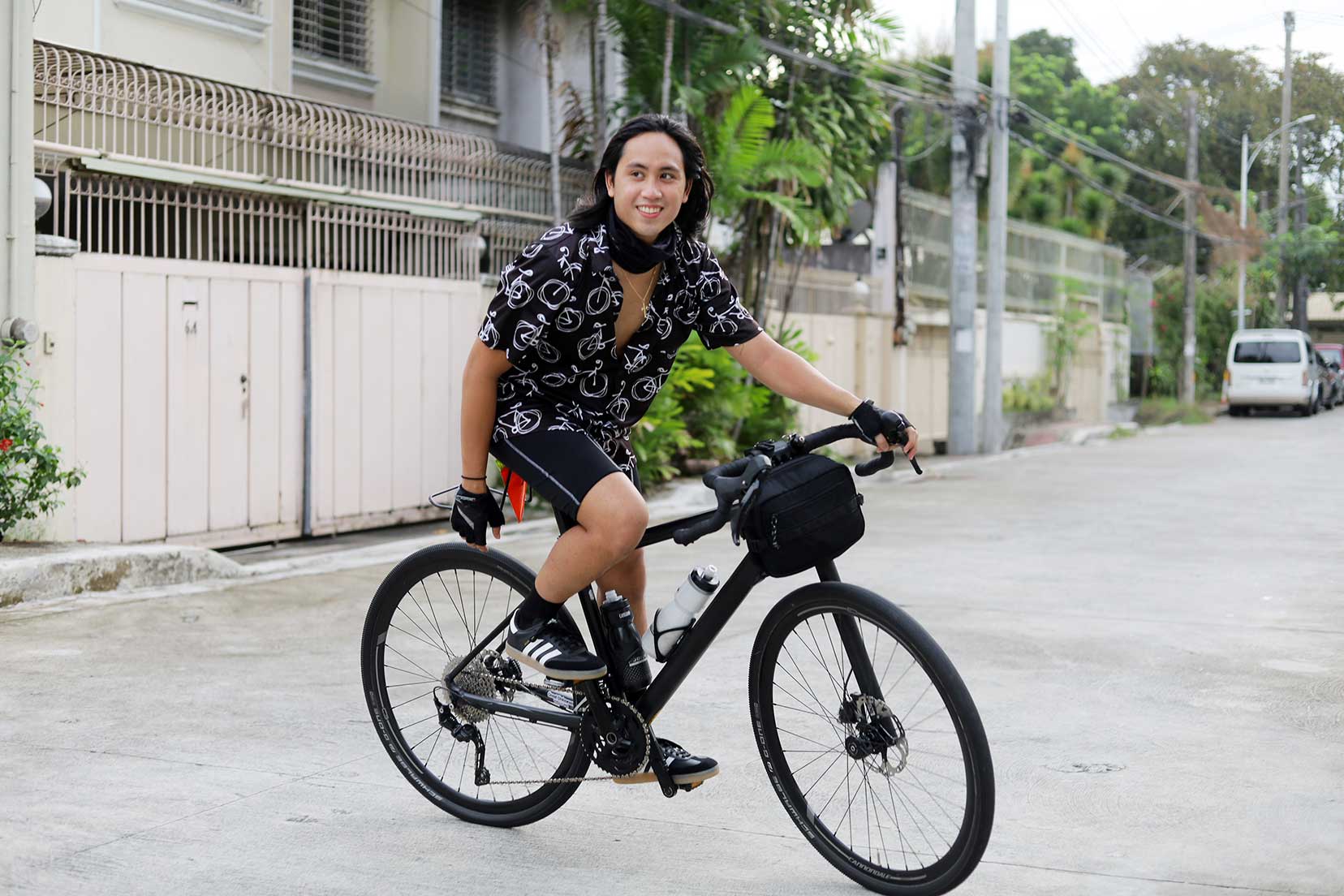 Justice Gatpayat usually always drives a car to get around the city before the pandemic. Sometimes, if he feels a little tired of weaving Metro Manila traffic, he asks a driver to help him. But for more than a year now, since his job started requiring him to come to the office, he’s regularly biking to work.

He lives in Quezon City’s scout area and his workplace is located in Manila’s Malacañang Complex, which is nearly 8 kilometers in distance. Justice thought that it might be a good idea to just bike to work for convenience and for his health.

“I was actually curious to bike to work and I wanted to see if it’s actually easier. Kasi it’s not that far and parking is really hassle,” he told us. “Pinapasok na kami sa work around July last year tapos skeletal lang. I really gained weight over the pandemic and I wasn’t really feeling fit. So bike, sakto papayat ako and sakto diretso work.”

(We were asked to go to the office around July but it’s skeletal. I really gained weight over the pandemic and I wasn’t really feeling fit. So I bike to lose some pounds so I can travel to work.)

He added, “Eh pandemic, so konti kotse so baka hindi na ako patayin ng mga kotse. With everything going on, I might as well take advantage of the situation in a way.”

(It’s pandemic so there were less cars and perhaps I would be killed by them.)

And he enjoyed it and realized that it’s actually easy. He was honest with us when he said that it never crossed his mind that cycling to work and city-to-city rides would be feasible in Metro Manila. The pre-pandemic Justice thinks that a bike is only for exercise and racing.

He had this mindset that driving in Metro Manila is the “easiest way” to move around.

“It really opened my eyes when I biked for the first time going to work. Parang nabuksan ‘yung mata ko in such a way na there’s actually another way of traveling and it’s easier,” he said. ”I was actually encouraged more to bike after trying it, ang bilis ko makarating sa bahay. Sabi ko, ‘solid din ito ha.’”

(It opened my eyes that there’s actually another way of traveling and it’s easier. I was able to go home fast.)

His dad, who’s really into cycling, gave him the extra push to bike to work. And the son is really thankful for his father for giving him the motivation to try cycling as a mode of transportation.

“My dad is a racer, talagang siklista siya. All my life growing up, laging may bike. Back then pa nga, naiinis ako sa kaniya kasi I didn’t see him much kasi nag-eensayo siya. Ngayong I’m older, medyo nage-gets ko na siya,” Justice said. “My dad was there, ang dami niyang tinuturo sa akin, ang dami niyang pinapa-realize sa akin. It was really like the things din that made me and my dad closer.”

(My dad is a racer, he’s really a cyclist. All my life growing up, there’s been a bike. Back then I’m displeased because I didn’t see him much because of his training. Now that I’m older, I kinda get him. My dad was there and he taught me many things, he made me realize things. It was really like the things that made me and my dad closer.)

The older Gatpayat gave his son a Canondale Bad Boy. Justice didn’t initially like this urban bicycle because it looked weird: the fork doesn’t have a right pipe.

He thought it was unsafe until he rode it and got the hang out of it with people telling him that it’s “maangas” (cool). It was indeed a bad boy. It’s also fitting that Justice is left-handed, they’re the same.

When Justice started his bike Instagram account, it was initially called “@leftybiking.” But it eventually changed to “@conyo.biker,” something that resonated with and was loved by many people.

“When you have your own personal Instagram and you like a lot of things like biking, ‘yung feed mo magiging puro bike na lang, ‘di ba? So ginawa ko ‘yung @conyo.biker kasi nawawala na ‘yung sense of reality. I don’t want to be confined with bikes so ginawa ko na lang siyang separate,” he said.

(When you have your own personal Instagram and you like a lot of things like biking, your feed will just be about bikes, right? So I made @conyo.biker because it seems that the sense of reality is disappearing. I don’t want to be confined with bikes so I made it separate.)

So why did he brand his bike Instagram page, partly himself too, as “conyo biker?”

It’s because Justice embraces who he is. He told us that he used to get a lot of comments saying that he’s a “conyo.” While it can be offensive to others, this cyclist wholeheartedly owned it.

For people who are unfamiliar, in the Philippines, being labeled as “conyo” can be offensive because some would use this word to brand and mock people who mix Filipino and English in one sentence.

Let’s be real, there’s nothing wrong with code-switching.

“I know it’s like a derogatory term, an insult, but I never got offended by it. Tapos sabi ko, sige papanindigan ko na lang,” he said. ”Inembrace ko ‘yung pagiging ako and I wanted the people who are like me, kami ‘yung mga maarte na mga bata like ‘yung mga nagpapa-drive lang, to realize na you know, cycling is fun, kasi parang biking does not look good for certain people.”

(I know it’s like a derogatory term, an insult, but I never got offended by it. So I told myself that I’ll just use it. I embraced who I am and I wanted the people who are like me, we are the kids who like to have someone to drive us around, to realize that you know, cycling is fun, because biking does not look good for certain people.)

That’s true. There are people who have this notion that people who bike to work and bicycles are inferior. And Justice recognizes that there are a lot of people in his network who are like that. That’s why he shows and influences them how cool, fun, convenient and great cycling is — and that it’s definitely something to look down upon.

What he’s doing is awesome. According to him, he has managed to encourage more friends and their peers to try on cycling. Some were even like him who used to think that Metro Manila is not bikeable.

His platform on Instagram @conyo.biker does not only chronicle his bike adventures, he also shares his knowledge and experiences so his audience would be inspired and be motivated to cycle. He told us that he plans to make more educational content regarding his bike commutes.

From someone who used to only bike to the gym or bookstore, you’ll see Justice on his Instagram biking almost every day even after a day of working remotely from home. He definitely became passionate about it.

“One good thing that biking has taught me is being more grounded, in a way, kasi you see everything na. Nakita ko ‘yung world in a very different perspective. Being in a car, it limits you to see how the world is talaga, how your city is,” he said.

(One good thing that biking has taught me is being more grounded, in a way, because you see everything. I saw the world in a very different perspective. Being in a car, it limits you to see how the world is talaga, how your city is.)

He added, “Love ko rin mag-drive eh, it’s my way of chilling din back then but I like biking now. Driving kinda closed my world din, pati the traffic really pisses you off eh. You forget to appreciate anything kasi you’re always trying to overtake the person next to you or trying to dodge that person na crazy mag-drive.”

(I love to drive, it’s my way of chilling back then but I like biking now. Driving kinda closed my world, even the traffic pisses you off. You forget to appreciate anything because you’re always trying to overtake the person next to you or trying to dodge the person who’s a crazy driver.)

Justice said that because of cycling he realized that Metro Manila is beautiful and that it made him want to make cities more beautiful and liveable.

We asked him on how he encourages his peers to try on biking, this is what he said:

“Bike infrastructure is way way better than before. It’s easier now to bike and you get to see the world in a different perspective. It’s convenient. Siguro simulant sa leisure, if natripan mo, continue it until you do what I’m doing.”

(Bike infrastructure is way way better than before. It’s easier now to bike and you get to see the world in a different perspective. It’s convenient. Maybe start it as a leisure activity, if you like it, continue it until you do what I’m doing.)

Oh, by the way, Justice appeared in the sixth episode of Super Ultra Panks.