The activist for the urban poor: “bikes are important because public transport is difficult”

Kai started riding a bicycle regularly as part of their transport in the third quarter of 2020. It was because they were having a hard time moving around the city — they’ve been using a vintage mountain bike that they borrowed from a cousin. 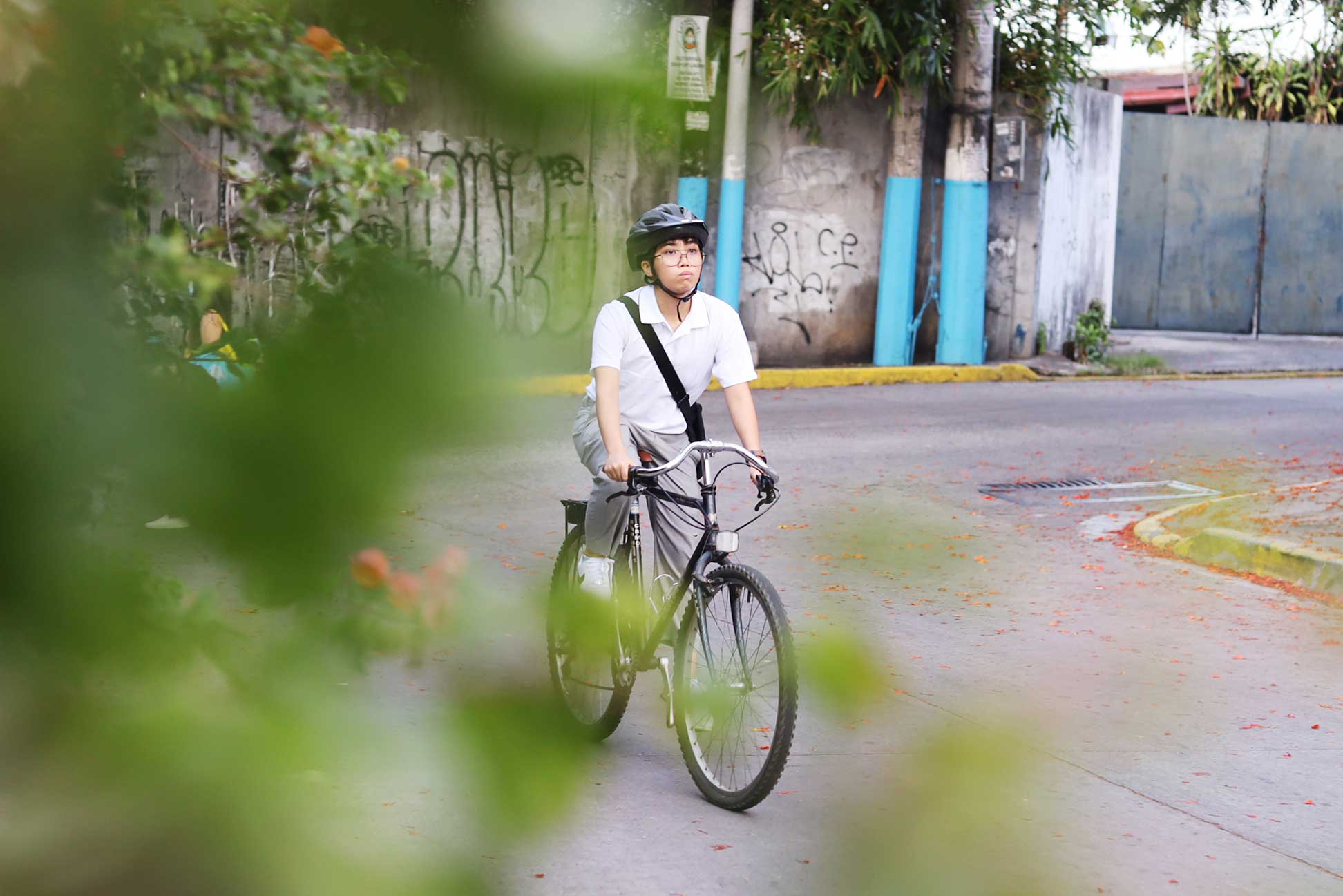 Last year during the early months of the lockdown, Kai remembers delivering food using their bicycle to poor communities along with other cyclists every weekend. It was probably one of the most memorable activities that they did to at least help ease the hunger of city dwellers who were having a hard time with quarantine restrictions.

Back then, mobility was more difficult and it makes so much sense that they’re using a bicycle to access narrow roads and reach families who live in tiny makeshift houses in the corners of the city. Unfortunately, this soup kitchen has already stopped but their concerns for the urban poor continues.

Kai started riding a bicycle regularly as part of their transport in the third quarter of 2020. It was because they were having a hard time moving around the city — they’ve been using a vintage mountain bike that they borrowed from a cousin.

(Initially, I started cycling with our bike that was unused for a very long time. Then the pandemic started and thought that our lives might be like this for the next few years so we decided to fix it.)

(But because my mother wanted to bike too, she remembered our cousin and we borrowed their bike that was stuck at their house. They lent it to us.)

According to them, it was way cheaper to move around using a bicycle than taking a private vehicle or taxis. As you may have remembered, back then, there were limited jeepneys and other public transport operating around Metro Manila. It was frustrating for them because there were times when Kai didn’t have other cheap and safer options.

Since they started cycling, Kai has noticed that there are many people from the urban poor communities that bikes for transport.

(When I’m biking, I get to cycle with construction workers and other urban poor. Cycling is important especially now that commuting is difficult. They have options before because public transportation is open but it’s now hard.)

Regardless of what others would say, public transport is evidently difficult. You see inhumane queues at train and bus stations. Buses and e-jeepneys are packed and commuters are treated like sardines during this pandemic when there’s supposed to be social distancing. In short, vehicles are lacking to serve the people who need to travel.

Now, we are locked into another enhanced community quarantine. It means that many people from the urban poor have lost income once again. The restrictions limited business operations and it paused work for many people, resulting in no salary for select Filipinos.

When workers get no pay for weeks, it doesn’t mean that their expenses stop like rent and electricity. Their stomachs don’t pause too, same goes with the family members that depend on the salaries of these people.

Some would unreasonably argue that being hungry this pandemic is the fault of these people who don’t save up and are too dependent on other people and the government.

However, we believe that these elitists and disdainful individuals would understand the urban poors’ plight if they just put themselves into the shoes of those who are badly affected during this pandemic. They should be considering the erratic economic activities, terrible pandemic response of the government and injustices of society such as unfair labor.

Kai is an activist and is also a volunteer of the urban poor group Kalipunan ng Damayang Mahihirap (Kadamay).

(I hope they try to immerse themselves in the community so they could personally know what’s really happening and prove if what they’re hearing are correct, even their personal prejudices and biases against the poor.)

Kai added that there must be a need to keep our cyclists safe on the road and that there should be better infrastructure for bicycles. Imagine, this is a mode of transportation used not only by privileged individuals but also the urban poor who depend on it to go to work. They recounted that their favorite is the protected bike lane in Quezon City’s Agham Road.

According to Kai, the urban poor is an integral part of our city.

(They run the workforce of the city. Without them, your buildings will not be built, they are serving you in fast food chains and restaurants and they are the cashiers.)

So how did Kai get into activism and got concerned with the poor?

It was through her mother who is also an activist. At a young age, Kai was exposed to the plights of the poor and it continued until they went to college. As part of their undergraduate program, they decided to apply as an intern in Kadamay.

(My mom is an activist. She used to bring me to communities at a young age and that’s when I got exposed to the lives of the poor. When you’re there, you interact with parents and the kids become my playmates. When I was in college, we needed to be interns so I decided to be an intern at Kadamay. I continued when I graduated.)

Although they admit that it’s harder to become an activist nowadays because of the political climate and red tagging, Kai is not losing her vision and goal in being one with the urban poor in protecting and upholding their rights.

(I’ve been here for four years and the biggest lesson is to trust the capacity of the poor to fight for their rights. For the longest time, it’s been draining to hear elitist takes against the poor. It’s not true that they are lazy and they are society’s plague.)

We ended our conversation with Kai talking about bicycles, their friends and the adventures that they have taken with the vintage mountain bike.First Bike Ride thanked them for a fun interview, they started pedaling away before the sun went down, with hopes that the lives of the urban poor in the country will be better — at least even small progress — tomorrow.