“I will be lying if I say that it’s not hard. My physical body was exhausted but mentally, I wanted to bike everyday,” Sanor Klaiklia said. 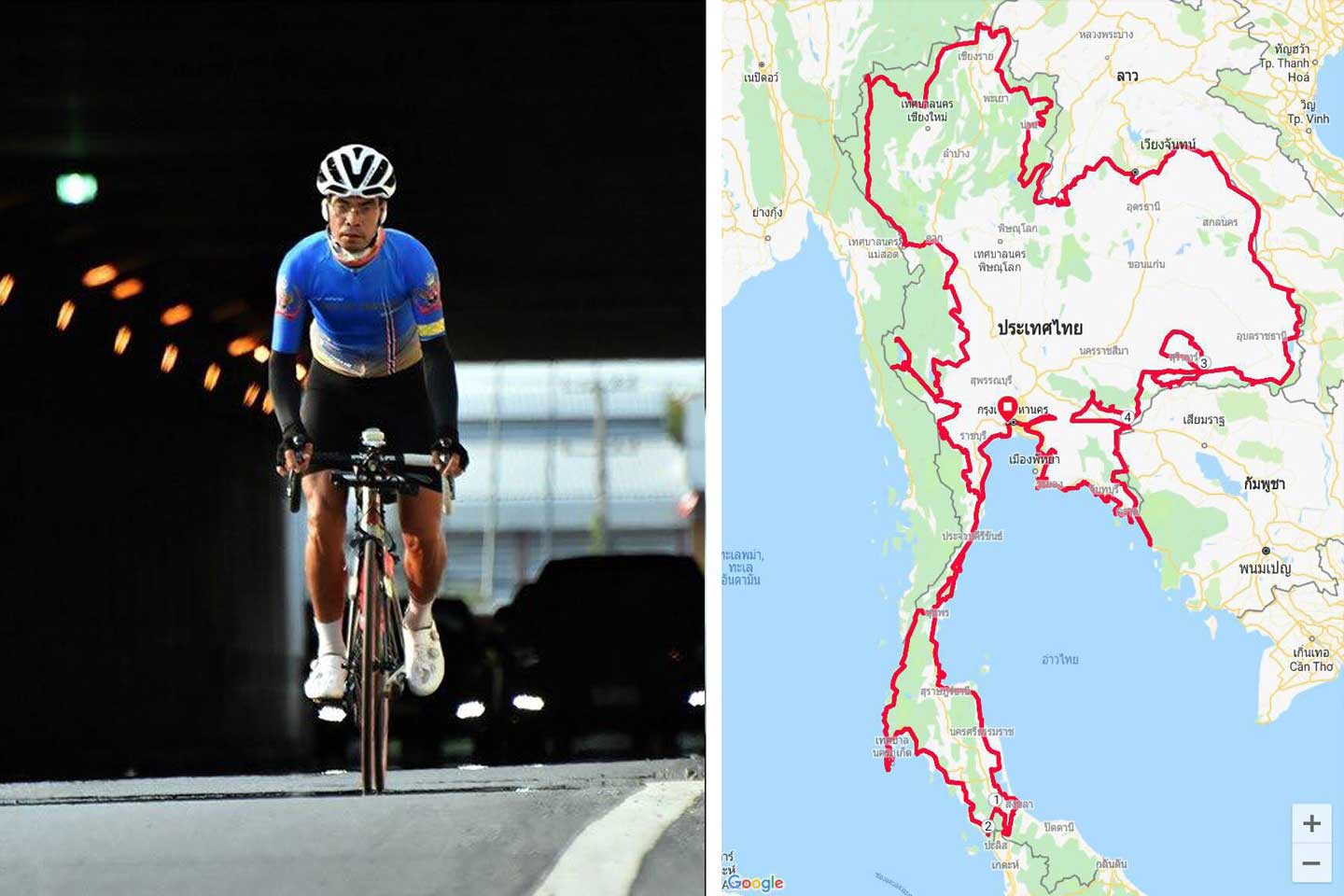 In 2019, Sanor Klaiklia completed an astonishing 10,056-kilometer cycling loop around Thailand in 45 days. He was 56 years old back then.

“People would tell me that what I want to do is impossible and I can’t do it. They said that if ever I finish this loop, I will hate cycling,” Sanor told First Bike Ride in Thai. “After the 10,000-kilometer trip, I actually became more obsessed with it, I wanted to cycle more.”

The long distance cyclist started this epic adventure in Bangkok and biked all the way down to the south where he cycled the coast line and then worked on the Mekong route. Upon reaching the northern part of Thailand, he biked westward near Myanmar before going back to his starting point.

This was done through the Rally Lamthong Tour of Thailand and he was sponsored by English cyclist Bob Usher. He did it using a road bike and cycled around 200 kilometers daily, with no rest days. He had a support vehicle that carried some of his essentials but the distance covered was all done through cycling.

“I will be lying if I say that it’s not hard. My physical body was exhausted but mentally, I wanted to bike everyday,” he said. “My skin was bleeding from being on the saddle for too long but I still continued and finished it.”

His journey was definitely not easy, including those years before the tour. According to him, long distance cycling mainly relies on endurance rather than speed. Mind you, his incredible stamina was not developed overnight — it was advanced through daily training and determination.

One could say that Sanor was a late bloomer in cycling. He didn’t play any sport growing up. His peers would go out and enjoy football, swim or run but this Thai did not find any physical activity interesting until 2015 when bicycles became popular in his country.

He was working all the time as a maintenance personnel for a tire company when he realized that maybe it’s time for him to try biking. That year, he bought a road bike and started cycling to work.

“It felt like exercise and then I thought that maybe I can go to Chiang Mai which is around 600 kilometers from my house in Bangkok,” Sanor said. “So I practiced by biking to work everyday for 25 kilometers and then another 25 going home. But before heading back to my place, I pass by different routes and do 50 kilometers to complete 100.”

Even if it’s raining and on weekends, he still biked. It was tiring at first, Sanor admitted but he added that one’s body will eventually get used to it.

His first long distance trip from Bangkok to Chiang Mai, a city in northern Thailand, can be very difficult to newbies. The training paid off and he managed to complete this route in five days — he cycled more than a hundred kilometers daily. Without the bike-to-work endurance preps, he said that this trip wouldn’t be possible.

After finishing the Bangkok-Chiang Mai trip, he realized that it’s possible for him to cycle around Thailand with a bicycle. With this goal in mind, the next step that he took was just to train more.

Aptly, he did more long distance cycling. He was able to accomplish a one-way Bangkok-Phuket ride and even a relatively short Vietnam-Laos-Thailand bike trip, among others. He also entered numerous Audax events to increase his strength, meet people and gain ideas on the different routes in his country. This cyclist was able to bike and compete in a time-trial race in the United Kingdom too.

Apart from these preparations, rigorous planning with friends and some professionals also took place. Year 2019 finally came and he was ready.

“The first map of Thailand that we came up with was around 7,000 kilometers but then it was the period when King Rama IX died and then King Rama X would succeed the throne,” Sanor recalled. “So friends said it might be a good idea to make the trip 10,000 kilometers.”

Cycling around the country — literally covering a map — is probably one of the most memorable experiences a cyclist can have. Before embarking on this legendary long ride, he was asked by his wife to choose between “dying while having work” or “die while cycling.” Sanor chose the latter.

And now, at age 58, we asked him what his next cycling goal was.

“Last time, I did the map of Thailand so I only covered a few places. This time, I want to bike to all the 77 provinces of the country,” he said.

Special thanks to Poon Tassanne Keeratiratwattana for being the translator of this interview.