When asked if he considered buying a proper helmet for his own protection, he told us that he can’t afford it. Mang RC works as an all-around worker for a warehouse in Cubao and for twenty years, since 2002, he gets paid below minimum wage. 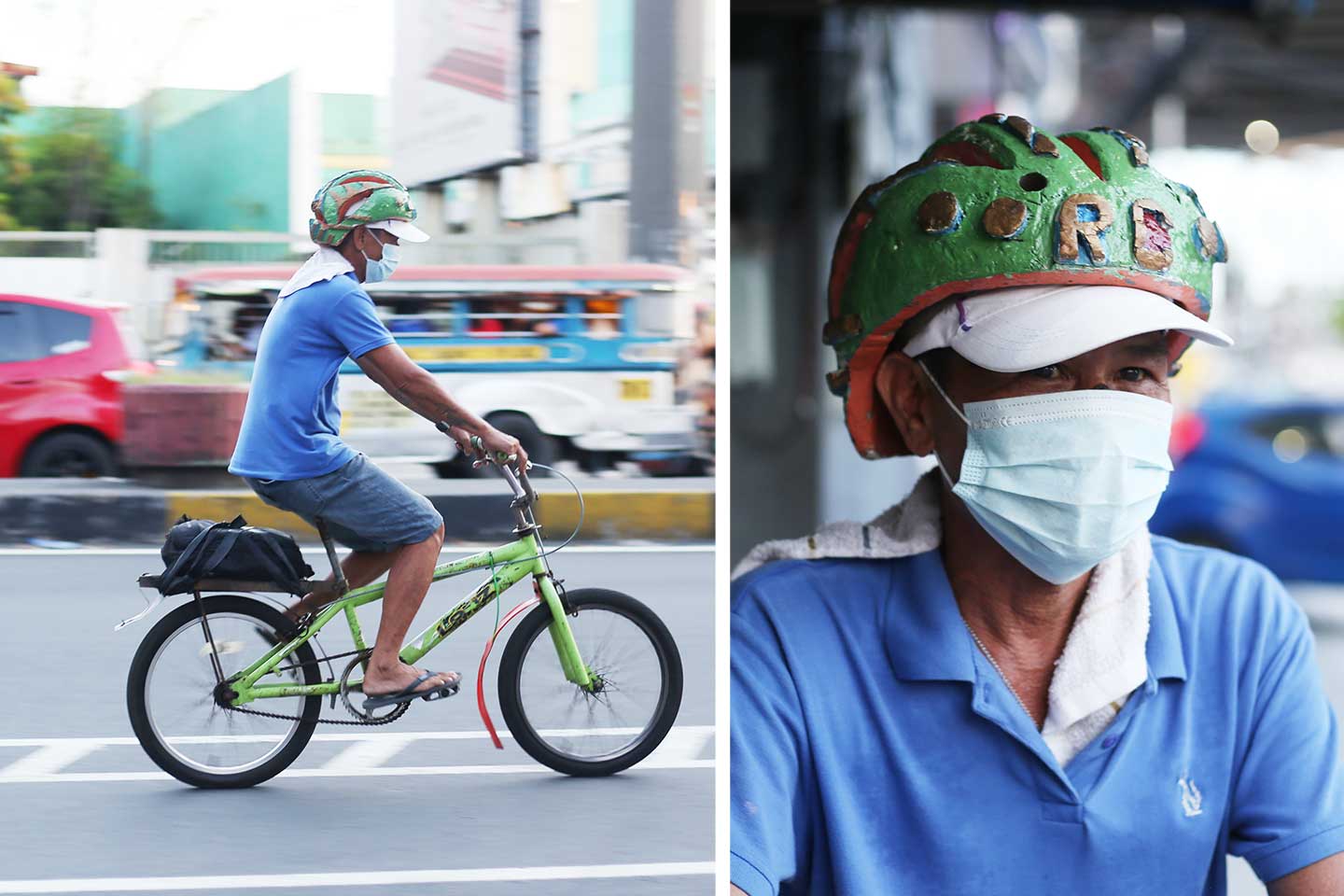 Everyone looks at his head as he carefully weaves through the busy traffic of Quezon City that afternoon. Mang RC, not his real name, always wears a colorful Styrofoam art as his helmet during bike rides, something he made from crap he picked up in Cubao back in 2019.

The helmet looks like an old toy. It reminded us of a headdress of superheroes. The base color is green with accents of blue, gold and red. The letters “R” and “C” can be found in front and there’s a big crack at the back. There are carefully etched geometric figures too.

Obviously, his DIY helmet will not protect him much if he figured in a collision but he still wears it. After all, Quezon City fines cyclists who don’t wear a helmet during bike rides.

When asked if he considered buying a proper helmet for his own protection, he told us that he can’t afford it. Mang RC works as an all-around worker for a warehouse in Cubao and for twenty years, since 2002, he gets paid below minimum wage. It was only this week that his employer was compelled to properly remunerate his service.

Throughout the years, he stayed with his employer because he gets a good bonus every end of the year. The cyclist even mentioned that he’s very considerate every time he gets a side hustle and asks permission to be absent for work.

But how did Mang RC survive, considering that he needs to feed his wife and four kids, with a measly salary? Aside from getting an extra job in construction, he also collects garbage at night and sells usable items to a junk shop. There’s his bicycle that also defers cost for transportation.

Mang RC, despite the appearance of his ride, is satisfied with his bicycle. He said that he prefers the BMX because it’s cheap and a bigger bike requires expensive maintenance. The guy said that a tire could only cost him 150 pesos and that his brake pads are easily replaced with belts.

First Bike Ride, through the donations gathered from our fundraiser with The Curator and YKW, gave Mang RC a new helmet and bike lights for his safety. We also provided him with a lock so he can secure his bicycle from thieves.

*The cyclist requested not to have his name changed for personal reasons but agreed to have his story published and photos taken.