The bicycle empowered Dyl: that she doesn't need anyone to move forward and that it only takes her feet to keep on going. 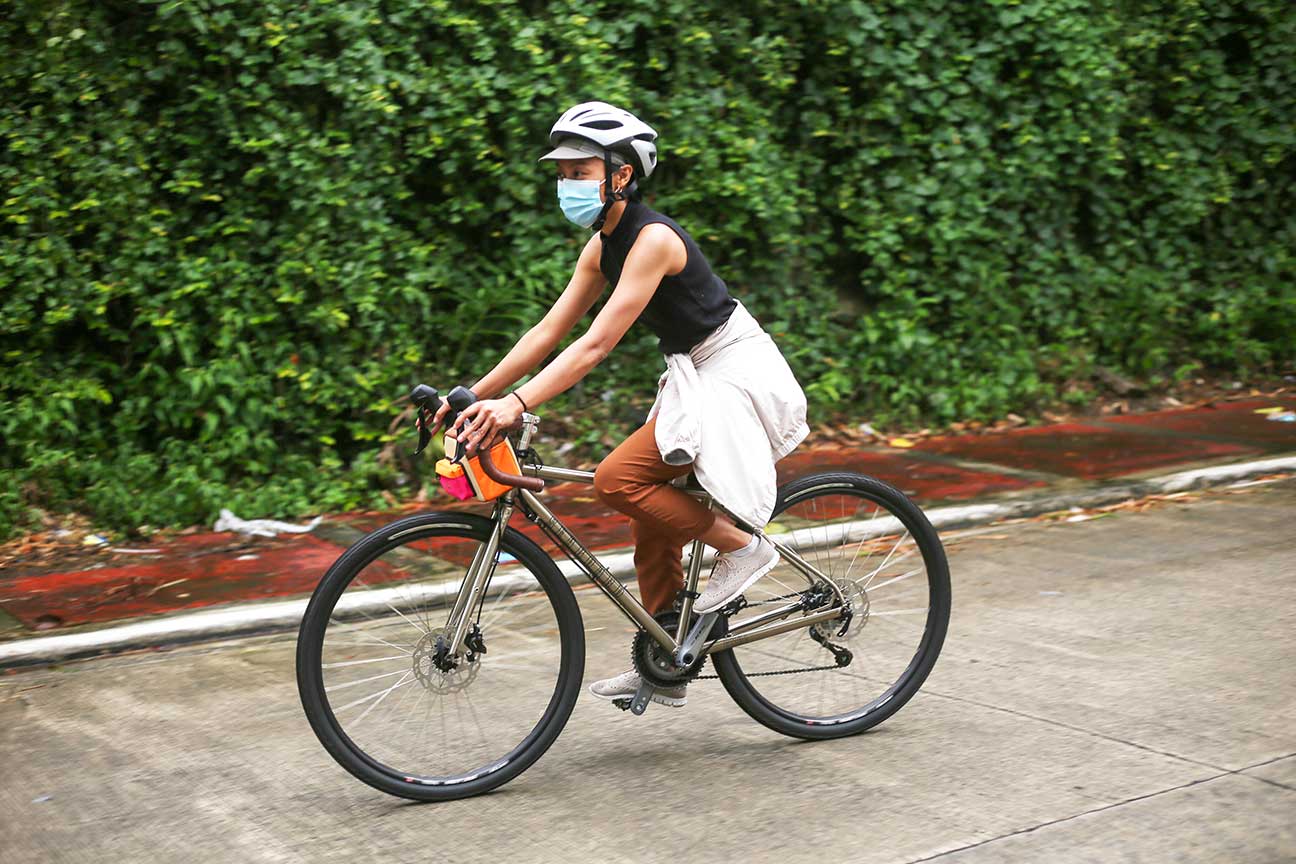 After a hard week working at the emergency room and Covid-19 ward, physician Dyl Mesina always looks forward to the weekend because she can finally ride her bicycle. For her, cycling is an outlet to relieve all the stress and release negativity.

She never grew up learning how to ride a bicycle. It was only in the middle of 2020 when she decided that it’s time to tick off something from her bucket list that’s been stuck there for a long time.

(When the restrictions eased, I told myself that I want an adventure. So I learned how to ride a bike. I used to be afraid because I can’t ride along with cars. It’s not easy balancing too but my competitive self helped me to push through.)

From the inner streets of New Manila, Dyl found herself managing to take over the bigger roads of Quezon City and was able to take herself to Makati, Taguig and has managed to cycle in the difficult steep pavements of RevPal in Tagaytay.

This doctor only practiced during the weekend because she has work as a general physician in hospitals in Antipolo and Marikina. She was using an oversized mountain bike back then and withstood body pains because she learned to love cycling.

On the beginning of her bicycle journey, she was accompanied by two people. They definitely had fun, she recalled. After all, biking is a social activity and happiness is awesome when it’s shared. However, eventually, Dyl became a solo rider during the start of 2021. She would go to cafes and enjoy the streets of Metro Manila all by herself.

(I learned to bike alone. I realized that it’s okay to be alone. Then I became active with the Instagram community and I got to know more people. But I still don’t have cycling buddies.)

The bicycle empowered Dyl — that she doesn’t need anyone to move forward and that it only takes her feet to keep on going.

(Realization? That I can do it. Before, I was relying on other people that I won’t ride if they won’t bike. It gave me a sense of “I can do this.” As much as you need other people, well so, it’s not really the case.)

A few days before our interview, this cyclist recalled that she went to Gilmore to buy pet food. At the intersection, two guy jeepney passengers catcalled her. She didn’t hear them but it was the female motorcycle driver who called her attention and told her that she was getting harassed.

Unfortunately, the driver told Dyl that she must not be biking alone — that she should have another man accompanying her when cycling to avoid getting catcalled.

It has never been the problem of a solo female biker that she gets harassed on the street. It’s the disrespectful men who are always at fault. She believes that this concept of women depending on men for protection should change.

We saw on Instagram that Dyl actively tackles pressing issues regarding cycling. According to her, things like catcalling and other forms of violence against women should be talked about.

(I don’t need to be accompanied by other people. Because the point is it’s never our fault that we get catcalled. We need to change the narrative because everytime that there’s catcalling, it seems that it’s our fault. Because of what we wear or because we’re alone.)

Despite these untoward incidents, Dyl is not discouraged in riding her bicycle. We asked about her cycling goals and she told us that she plans to commute by bike in the future.

The Covid cases in the country are peaking it’s all time high and this health care worker gets very frustrated and tired during her duties. Aside from the fatigue, she can’t help but feel sad with what’s happening in the country — our situation in this pandemic, the number of dying Filipinos and the amount of unattended patients due to the lack of facilities.

But the doctor remains hopeful. In these challenging times, she always tries to look at brighter things like a patient who expressed gratitude or a nice three-hour sleep. And of course, the anticipation of a bike ride at the end of her weeklong hospital duty.

Dyl is currently using a Seaboard CX01 that’s in xxs, something that fits perfectly for the dainty doctor. Various cyclists that she met from Instagram helped her when she was gathering the parts for her new bike. It was built by Budol Buddy.

(I feel happy with my new bike because it’s like a community-built bicycle. I think that in a way, I’m never really alone.)