On Christmas Eve, she lost her home and dream bike in a fire

Her dream bicycle, a fixed gear that she bought last November after saving up for the entire year, was not saved from the disaster. We gave her a folding bike donated by a generous cyclist who answered our bicycle donation drive call. 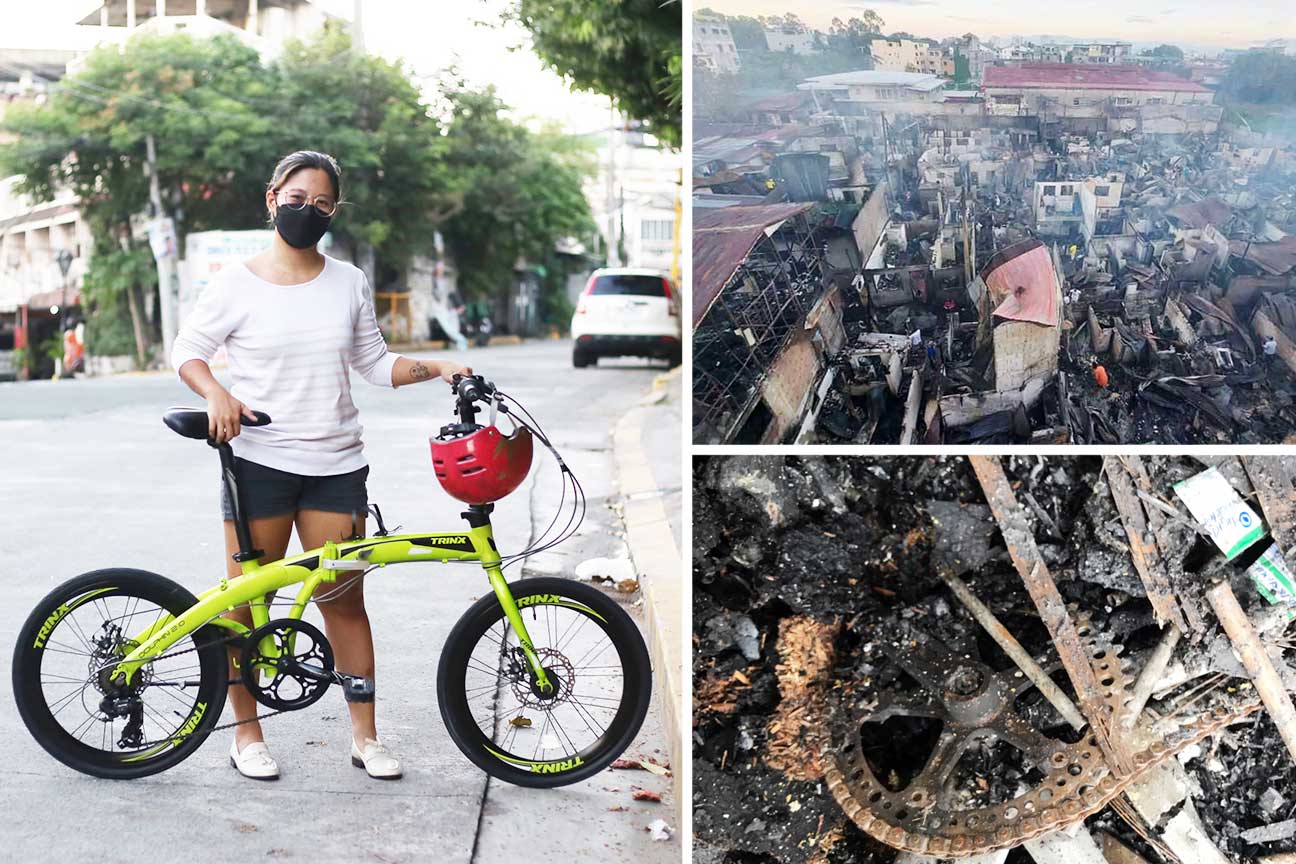 Shajara Ranollo was busy preparing for her family’s Christmas celebration when a fire broke out in their compound in Mandaluyong. At first, she thought that everything would be under control because their house is far from where the flames started and firefighters had already arrived at the scene.

(When the second house was on fire, the firefighters arrived but they didn’t have much water in their tank and the fire hydrant outside didn’t have any water. Instead of clearing the fire immediately, nothing happened.)

(The most devastating is that our house was the last one that got burnt.)

According to Shajara, she was only able to evacuate her family members, save her epileptic dog, a laptop and a cellphone. She managed to gather all her documents, ids and cards inside her Sack It! bike bag but when the situation quickly went out of control, she wasn’t able to pick it up on her way out.

She said that she wanted to go back but the fire rapidly blocked the pathways and if she pushed through, she could have been trapped inside the compound.

It was a terrible Christmas eve — the fire started around four in the afternoon and it finished at around eight in the evening. She told First Bike Ride that she was the eldest in the household and felt responsible. She lives with her siblings and their families — which includes a two-year-old child and a pregnant woman.

(We spent Christmas in the evacuation center. We didn’t feel Christmas. We were busy and many were crying, they can’t believe that their houses were gone.)

Her dream bicycle, a fixed gear that she bought last November after saving up for the entire year, was not saved from the disaster. Shajara has been biking to work from Mandaluyong to Ortigas even before the pandemic and it’s very unfortunate that she lost her main mode of transport.

The lady who works in the Interior Design industry told us that she recently got this dream bike after saving up for over a year. Aside from using it for work, she also bikes for recreation.

(My work is pretty close, a total of seven kilometers one way, but I save a lot. A bike is a big use in traffic because I have tried commuting. It’s difficult to get a jeep, taxi or motorcycle.)

Her best friend Chime messaged First Bike Ride and told us about her story. She learned that Shajara has been looking for a folding bike (although not very keen as the lady prioritizes her family members’ basic needs) that she could use as a replacement for her fixed gear.

Since Shajara’s family is moving to her cousin’s house for the meantime as they recover and find a permanent place, she could use a folding bike because she’ll be back working and it could also be a tool for her to move around. It will be more practical because they’ll be occupying a small area and a folded bicycle is very ideal as it saves space.

We gave Shajara a green Trinx folding bike, a donation from one of the generous cyclists who answered our call a few months ago when we announced our bicycle donation drive. Apart from the bike, we also handed over a helmet and interiors.

(I’m trying to be positive but at times I’m still startled because of what happened. It’s a big help that my best friends are there to find help for me. Even if our house was burnt, I know I can overcome this because I’m surrounded with kind people. Thank you for the help.)