French bike commuter in Metro Manila: ‘it might not be easy but you can go anywhere’

“Cycling gave me flexibility. I don’t depend on anyone to go to one place. In terms of getting a car, in my mind, I always find it difficult to accept that you need to have something that weighs three tons to move something that’s just 80 kilos, which is a person, from point A to B,” Pierre-luc Sartre said. 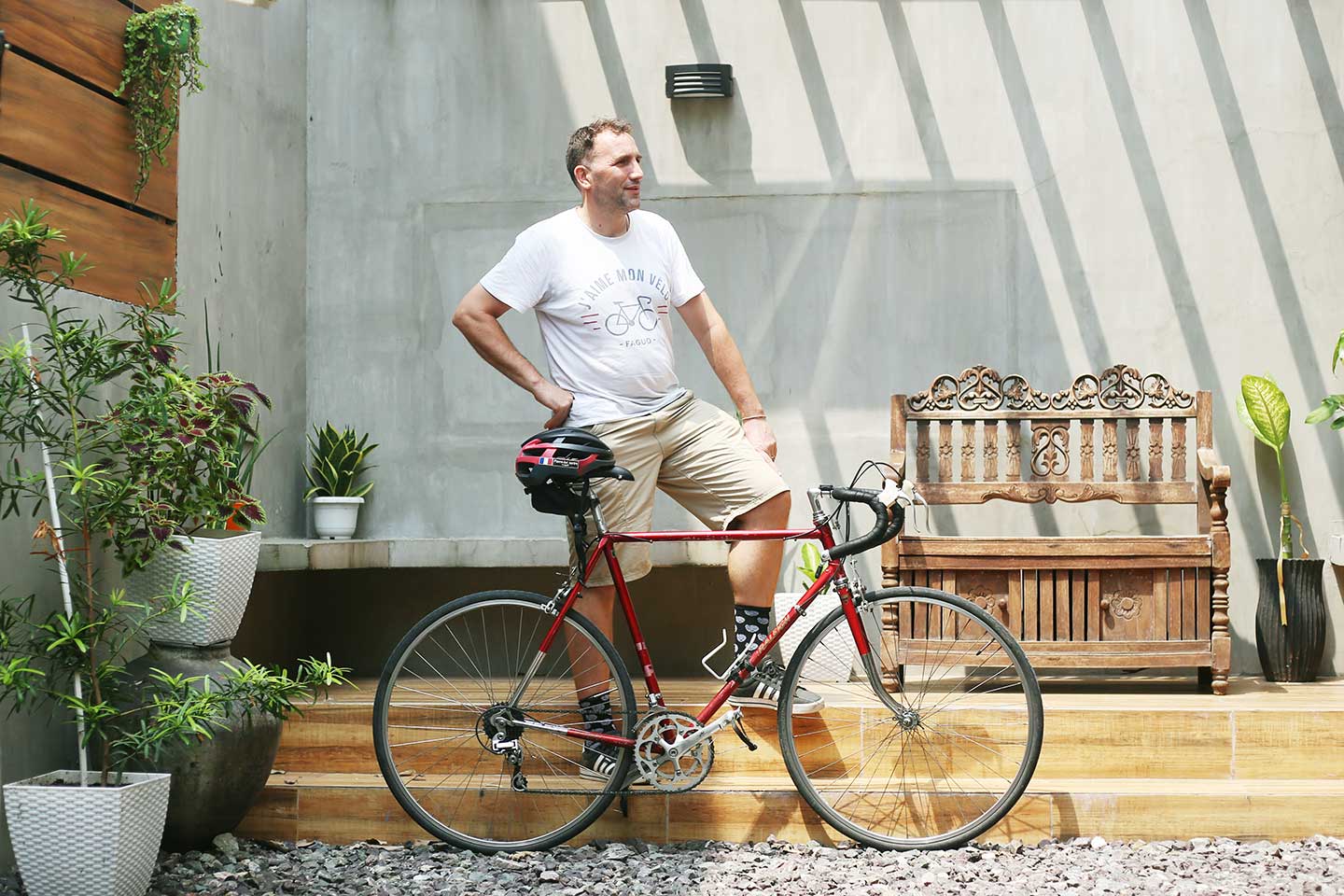 Perhaps cycling in France and the United Kingdom, countries where French teacher Pierre-luc Sartre used to live, are way different than biking in Metro Manila. Here, the traffic is crazier and the infrastructure can be far from ideal. But the situation did not deter this cyclist from bike commuting in the Philippines.

Pierre currently lives in Taguig, he moved to this city in 2019 from London when his wife was assigned in the country as the managing director of a marketing company. He’s an educator and one of his first jobs is helping French kids who had difficulties in learning. Interestingly, his students live in different locations in the metropolis and needed to visit them.

“Basically, I was teaching in Makati, BGC, and in different gated villages so I decided to take a bike. I went online to find a bicycle and found a 7,500-peso single-speed,” Pierre recalled. “There were not a lot of biking communities back then and there were no bike lanes. There was really a lot of traffic at that time and drivers were not aware that there were bikes.”

Compared to the current situation of Metro Manila, pre-pandemic traffic was more difficult for cyclists. Pierre has access to a car, could drive or rent a vehicle but he chose to ride a bicycle because he feels that it’s more convenient.

He used to cycle a lot back in France, anyway. This biker looked back at his younger years remembering that he attended a cycling academy where he was trained to ride a bike like an athlete. But aside from the training, he was enjoying his bike commutes too. Pierre admitted that he got his driver’s license late because he was biking a lot back then.

“Cycling gave me flexibility. I don’t depend on anyone to go to one place. In terms of getting a car, in my mind, I always find it difficult to accept that you need to have something that weighs three tons to move something that’s just 80 kilos, which is a person, from point A to B,” he said.

The cyclist added, “And I don’t really see the rationale on it. You need more energy to move the car than to move the person inside the car. When you cycle, basically 3-5 kilometers from home, it’s easy to have a bike.”

We first met Pierre at TryOn Marketing when he was having his gorgeous red Raleigh bicycle serviced. While waiting for his bike repair, he told us about his cycling adventures in the Philippines: his long-distance trip from Pagudpud to Matnog, his century rides and his feat of conquering popular loops.

He really enjoyed cycling in Metro Manila. From biking to work, we see Pierre on social media exploring the streets of the city, taking pictures of street art and random interesting subjects he encounters on the road. He likes going to cafes too — we even randomly met him again at Kuro, a coffee shop in Katipunan.

“Cycling in France and the UK is really easy. The mindset in France and the UK is a bit different in a way that in those countries, you’re given importance when you’re smaller on the road. In a way, the priority is for the pedestrians to cross the road and the cars have to stop for them,” he said. “Here, if you are a pedestrian, you are putting your life in danger every time you cross the road. And it’s the same with cyclists.”

“In France, there’s a hierarchy where we need to protect the most vulnerable people. Whereas in a way here, it’s the other way around because it’s more of showing off how wealthy you can be. And a car is still a way to say how much money you got, it’s a social status.”

Pierre added that in the European countries where he used to live, many people bike to work and companies help their employees who cycle by providing changing rooms and showers.

Nevertheless, Pierre mentioned that he still likes cycling in Metro Manila despite the challenges. 2019 might be more difficult but the pandemic has seen the possibilities of cycling in the country. And now that we’re trying to go back to normal, he’s happy that people’s mindsets are changing and there are a few bike infrastructure installed.

“In 2019, I’m spending almost half an hour cycling for a distance of a few kilometers because you don’t really know where you need to be or what’s really safe. Jeepneys and cars are colliding and you are a bit afraid to go on to take your own place on the road,” he said. “And the pandemic came out and there were no more cars on the road, which was wonderful.”

The biker added, “Cycling now is more challenging than the early months of the pandemic. But it’s better than 2019. There’s improvement in terms of awareness. Sometimes, there’s a bit of frustration because people are still parking on the cycling lane and the traffic officers don’t really realize the importance of cyclists over cars and over pedestrians which is a bit of shame.”

He had a nice time in the Philippines, he told us. Pierre is now preparing for a big adventure in France and he’s been training here for that trip — he’s finished a few Audax and is now aiming for at least covering 100-kilometers of city cycling every week.

What’s that big challenge? He wants to do the usual route that he’s been doing with his dad back in Ardeche in Southern France. It’s a 200-kilometer trip with more than 6,000 meters of elevation.