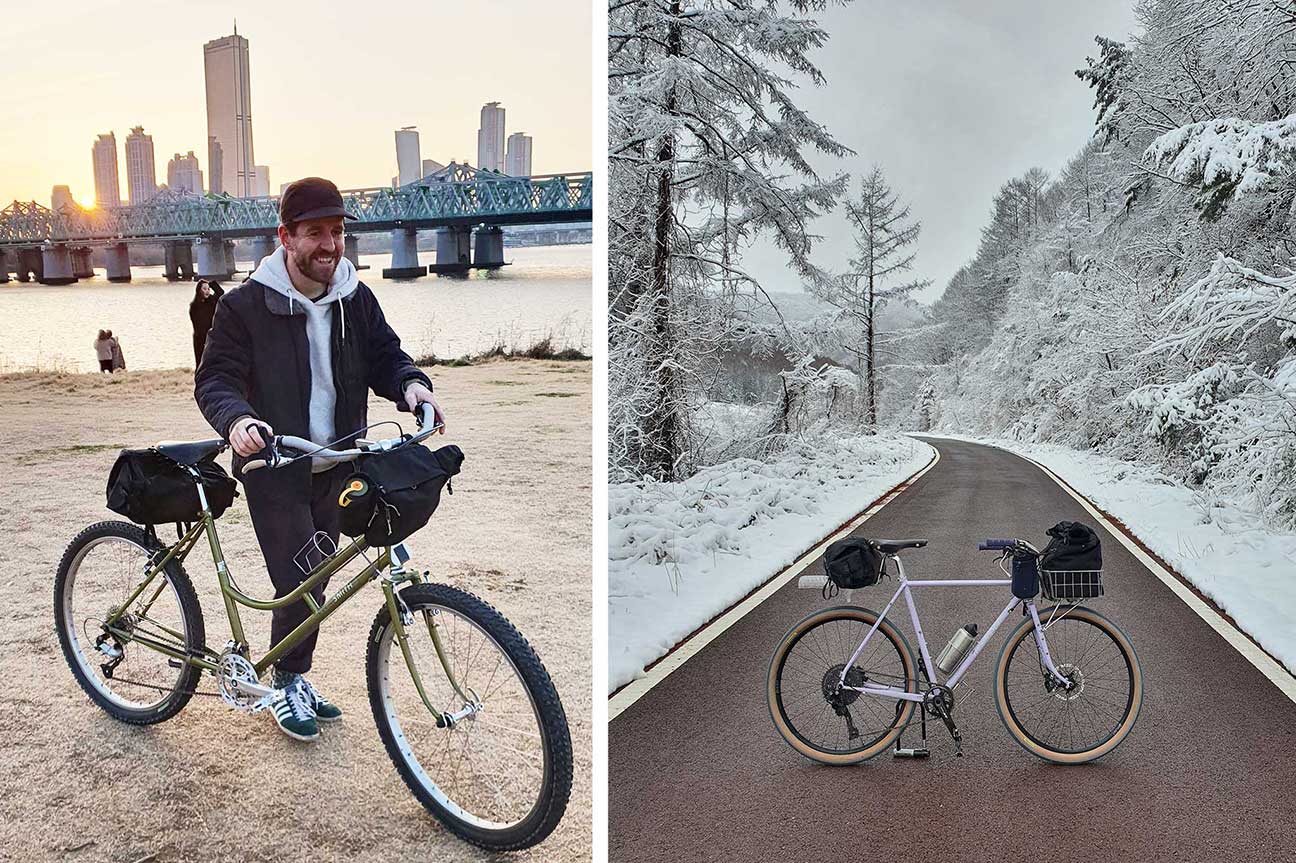 You’ve probably seen the beauty of South Korea from K-Pop music videos or scenes from a Korean drama. But it’s so much different browsing pictures of this incredible country taken from a cyclist’s perspective – it feels so personal and it makes you want to ride your bicycle there.

Marcus Gomersall of the cycling Instagram account @probably_riding posts gorgeous images of his bike rides in South Korea. The photos are very photogenic. Aside from his beautiful bicycles — Velo Orange Polyvalent, 90s Trek MTB and a Rivendell Clem Smith Jr. — his adventures are simply charming.

“I ride every day for commuting, buying groceries, meeting friends, going to cafes, touring and bike camping etc…,” Marcus told First Bike Ride. “During the weekend I love riding around Seoul with no real plan, just stopping by a cafe or having a quick bite to eat.”

Cycling is not something that he discovered when he started working in Seoul. Back when he was a kid, he used to enjoy bike rides around the English countryside with his twin brother.

“We felt so free back then, and I still have the same feeling when I ride my bikes now,” he said. “I have always owned a bike for commuting and weekend fun but my passion really took off over the last two or three years, pretty much since I got the Velo Orange Polyvalent. It was a huge part of maintaining my mental health during the peak Covid times.”

In a hilly city like Seoul, having low gears is a must. Marcus said that he still has his fixie but he doesn’t use it now.

This cyclist said that there’s a long dedicated cycling path along the Han River and its tributaries. In these parts of the city, there are lots of things to do and places to check out that’s very convenient for people on bicycles. He added that Seoul has a great bike infrastructure and it’s constantly improving.

However, he has observed that it caters more towards leisure and sports riders than bike commuters.

“Cycling in Seoul is pretty great although it’s certainly not a cycling utopia,” he said. “On the main streets of the city there are more bike lanes appearing but I feel like they are designed to make the roads better and more convenient for cars, as opposed to making them better for cyclists.”

He added, “Cycling away from the bike paths is advised for more experienced cyclists who can ride more defensively. There are plenty of quiet back roads to take though.”

This cyclist, who was born and raised in the United Kingdom, teaches English in South Korea. He first worked in this country in 2009 and stayed for three years. Back then, he was already biking the streets of Seoul using a fixed gear.

He eventually moved to Germany, and then to London. Two and a half years ago, he returned to South Korea and is now working in a British International School in Seoul, a job that he found “pretty fulfilling.” During school breaks, it gives him the opportunity to go on bike tours.

While he regularly bikes in Seoul, Marcus also recommends some cool cycling spots outside the capital. He suggests taking Seoul to Busan or East coast bike paths. He highly encourages biking in Jeju Island in the south.

“I haven’t actually ridden Seoul to Busan but I plan to do so before I eventually leave. It is a dedicated 600-kilometer bike path all the way from Seoul to Busan on the South coast. Nine days including a couple or rest days would be perfect for that,” he said. “It would be a great way to see the country and is well set up for bike touring with plenty of places to stay.”

First Bike Ride learned about Marcus’ bike adventures through Instagram. While we were browsing one afternoon, we just saw how cool his posts are and it made us miss Seoul, one of our favorite cities in the world.

Through Instagram, Marcus met a few people in South Korea whom he shares his interests with. He considers them as good friends and they ride around the city for coffee and food. Interestingly, he, along with his cycling friends, has already appeared on a Korean TV show where they cooked food while bike camping.

Does he have a non-biking Instagram page? Marcus said that he deleted his old account because he didn’t want to document the “boring parts” of his life. Instead, he made a dedicated cycling platform where he could share something that he’s passionate about, which is riding a bicycle.

“I think my love for Korea and joy of riding my bike comes across well through my photos. I really enjoy the interactions I have with people across the world who are interested in the same kind of riding or interested in life in Korea,” he said.

This cool dude made a shout out to the Filipino bikers that he interacts with online: “I’ve been communicating with a lot of people in the Philippines who seem to have great taste in bikes. I hope I can ride there sometime in the future.”