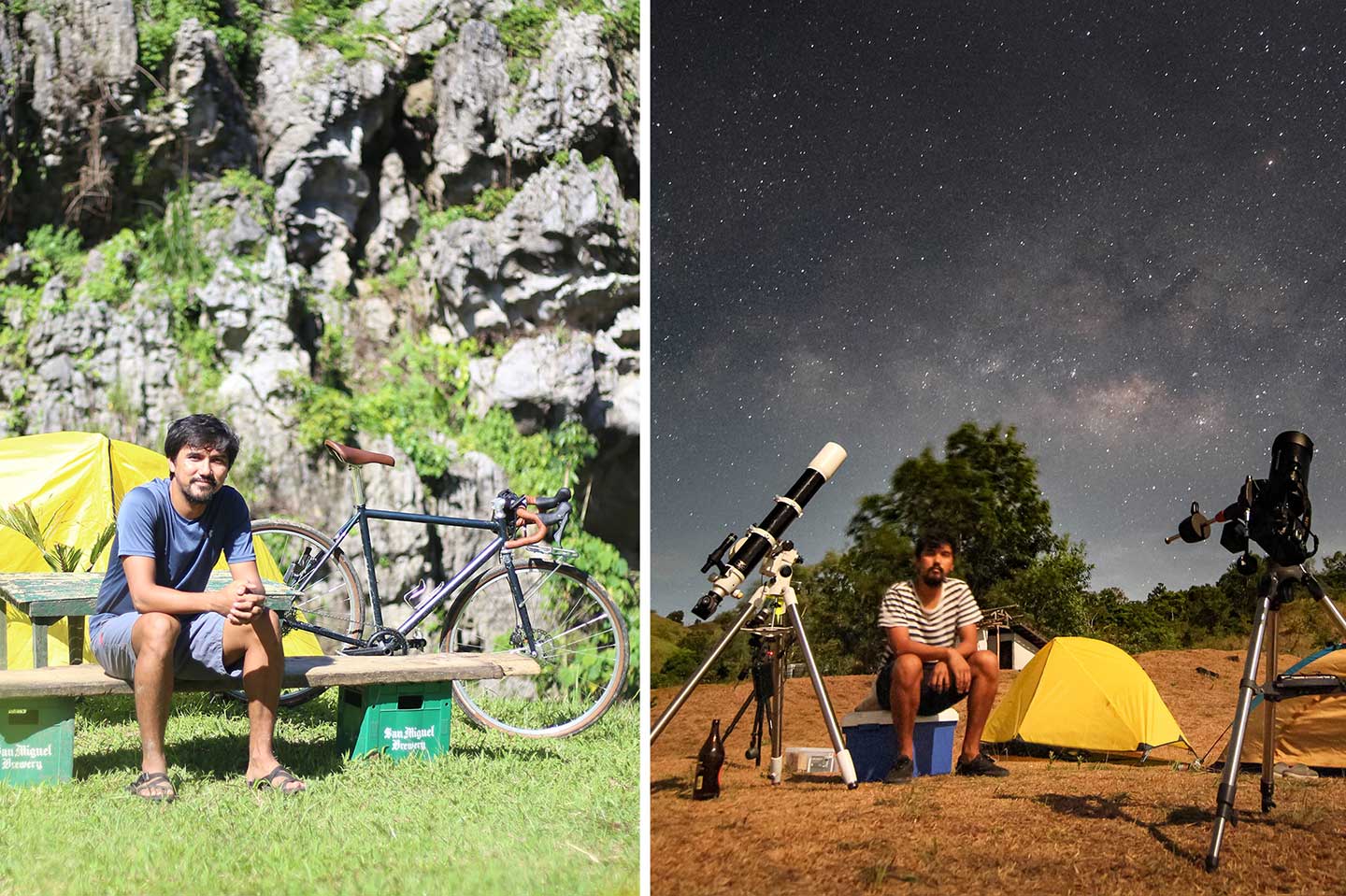 This astro enthusiast is bike camping to see the stars.

Kashogi Astapan likes to ride his bike packed with only the necessary things that he needs for camping — it can be composed of a tent, cooking equipment, his lights and camera for documentation, among others. And while everyone enjoys the socials at the campsite, this astro enthusiast prefers hanging out in a dark spot to see the stars.

Before getting into cycling, Kashogi already loves the outdoors. He likes hiking, camping, stargazing and going to the beach. You’d probably see him with nature every weekend than hanging out inside a mall.

He started cycling around five to six years ago when he saw his friends enjoying weekend rides in the mountains of Rizal. Based in Cainta, the popular cycling destinations and routes are pretty accessible to Kashogi. His first bicycle was a mountain bike, something that’s apt to use in the abundant trails of his province. Later on, he built his own road bike for longer rides on better pavements and a gravel bicycle for a more versatile riding.

Eventually, Kashogi started cycling to work too. He’s teaching in a university in Manila and he lives a few kilometers away from it. In his first week of work, he tried riding public transport — it was difficult, he recalls, mentioning that traffic was terrible and it’s just hard to get a seat.

We were with Ugi recently where he guided us in our first bike camping adventure. We completed the Sierra Loop and camped at Tatlong Bato in Tanay, Rizal. He helped us from planning, cycling, setting up our tents until the last kilometers of the ride.

Kashogi can take a vehicle or hike to a campsite, but he says that he prefers cycling to the destination. As cliché as it may sound, he says, but it’s really the journey that’s memorable.

Whenever he is planning a bike camping activity, he takes two things into account: the weather and the moon. Since he enjoys star gazing at camp, he notes that the sky needs to be clear to see the stars and the planets. It shouldn’t be cloudy.

Kashogi, who is the Chairman of the Philippine Astronomical Society, is mindful of the moon in consideration of what he likes to view that night —you have to take note of the moon’s position when observing a certain nebula and it’s hard to see the milky way if it’s too bright.

How about the telescope? If he’s with a group who will only bike, he’ll just view the sky with his eyes and camera. It’s hard to bring the scope on a bicycle because it’s very fragile. But if he has a friend who’d join them but will drive to the campsite, he’ll assign that person to bring the equipment.

He likes to take newbies to bike camps because Kashogi enjoys passing the experience to more people. Just like what he did during our ride, he was always helpful from the beginning until we parted ways.

We asked him about his favorite bike camp destination but he answered us with a route.