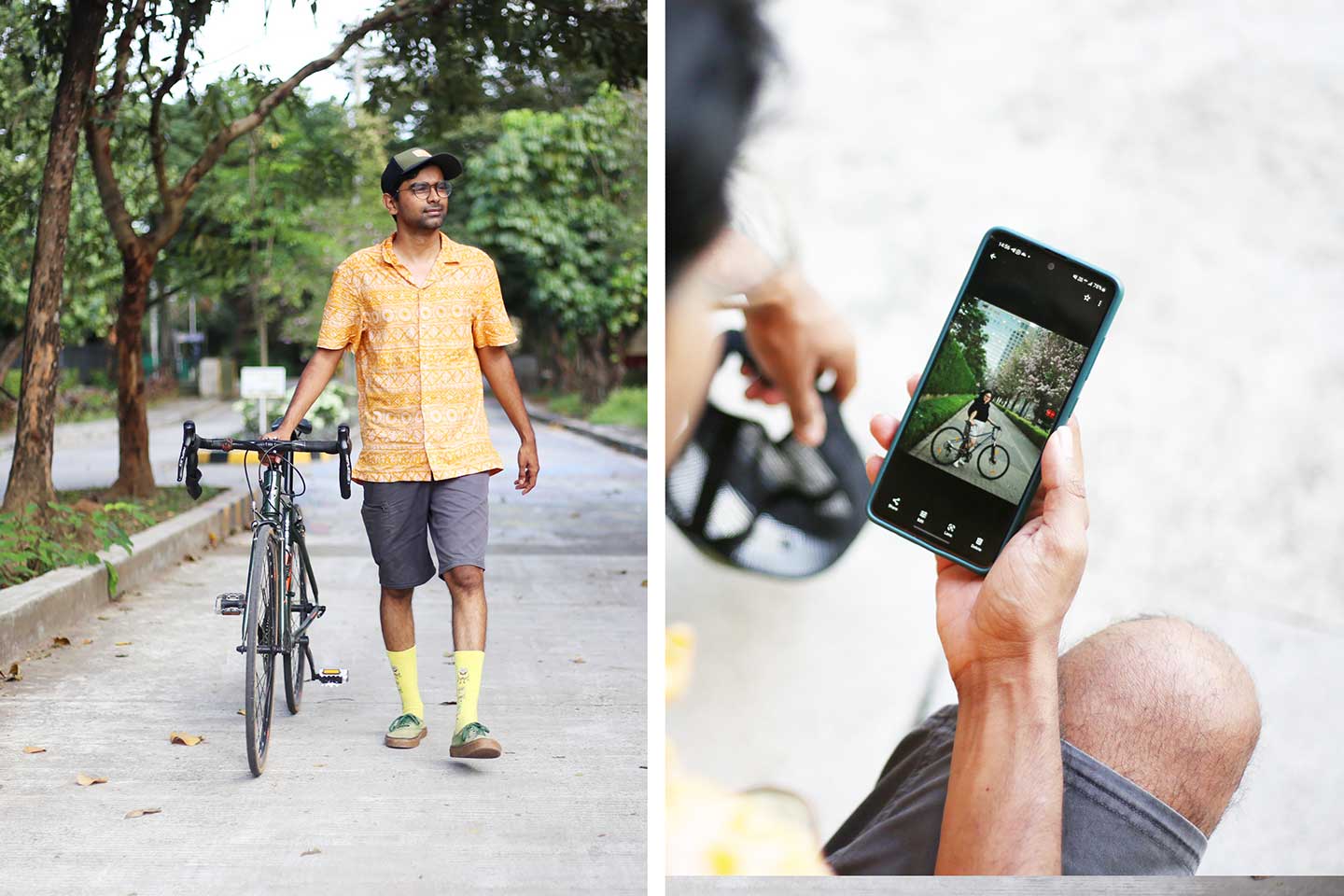 “2022 I lost everything I had,” Joel Sakkari’s caption reads in his New Year’s Day Instagram post. “I now write in an empty book.”

We met Joel during Oh Yeah Cycling Club’s year-end bike ride to Pueblo Cafe in Antipolo. He was using a Spanker roadbike, a bicycle he borrowed from his brother-in-law that has been practically untouched for a long time.

Joel is from Bangalore in India and is visiting his Filipino family in Manila for the holidays. Spending Christmas and New Year’s Day this year was a plan he had with his wife Eunice. The trip was supposed to be a reunion since they weren’t able to visit the Philippines during the pandemic due to Covid-19 restrictions.

However, Joel flew alone to celebrate. He lost Eunice after her brain surgery in July last year. In May, they found that she had a brain tumor that needed to be removed.

“I have a family here in the Philippines. I was married to a Filipina, she recently passed away but I wanted to spend Christmas and New Year with the family. It’s my first time spending Christmas without her,” he said. “It was very difficult because we knew that she was not well but we never thought that it would be this serious.”

He added, “First thing I did to cope was to accept the truth. But it took some time to accept what has happened, to kind of respect the fact that everyone has to leave someday. I’m still in the process of coping up with that and I think I don’t know when that process will end.”

Bike rides help, according to Joel. For this cyclist who has been enjoying bike commutes and long rides in India, cycling has always been a way for him to relieve stress. As a musician, it’s also his tool to take a break from work and get inspiration.

That’s why even before arriving here in the Philippines last month, he already asked his family  if there’s a bicycle that he can use during his stay. During our ride to Boso-Boso, Joel said that he doesn’t know anyone in Metro Manila’s cycling communities. It was because of Ralph Aguilar, whom he messaged over Instagram to ask for bike ride tips, who introduced him to OYCC’s year-end event.

“But you see, I was not able to ride a bike for a very long time. In fact the last time I came here in late July and August, I tried riding a bike but I think it was just 10-15 kilometers into the ride, I collapsed. I bonked and I couldn’t remember anything for a few minutes,” he recalled. “That was when I lost confidence that I could ride because of a lot of trauma and stress, I was not able to function properly for a few months.”

“The ride we did with OYCC was actually my first long ride after that fall. I should be back cycling in India. After that long ride, I think I’m confident again that I can do it because that collapse killed my confidence.”

Joel started cycling in 2012 but he had to take a break from the saddle because he got busy with other endeavors. Nevertheless, in 2020, he returned. He’s now using the bike for transport and has become an advocate of cycling to work.

Despite the crazy traffic situation in Bangalore, Joel still believes that cycling is the better option to move around the city. Interestingly, after biking around Metro Manila for a few days, he mentioned how the roads in the Philippines are better than in India.

He said that he’s glad that he’s been able to ride a bike in the Philippines and that he managed to make friends from the city’s cycling communities. This, along with the holiday activities he did with his family, makes his trip in the country memorable.

Despite the unfortunate passing of his wife, Joel said that he doesn’t want grief to overpower what has happened. He told us that Eunice had a good life and that those are the things that should be celebrated.

“Of course, what happened was unfortunate but I don’t want to live in that sadness because my wife lived a good life. She was a very cheerful person, she was always laughing and we were always making jokes. We always had a good time,” he said.

“And she was a good person, she lived her life to the fullest and I’m happy how she did her life. That gave me some sort of peace and I don’t want to live being sad. She achieved a lot of things. She was happy.”

We saw over Joel’s social media a picture of Eunice with a bicycle. We asked if she’s also into cycling.

“I wish I could have ridden a bike with my wife here in the Philippines. That was the plan but she wasn’t confident on the bike back then. She rides but she’s not very confident in navigating through India’s traffic,” Joel said.