Pinay Bike Commuter Community is a Facebook group that is exclusive for female cyclists and members can start conversations about their concerns about cycling and women’s issues. 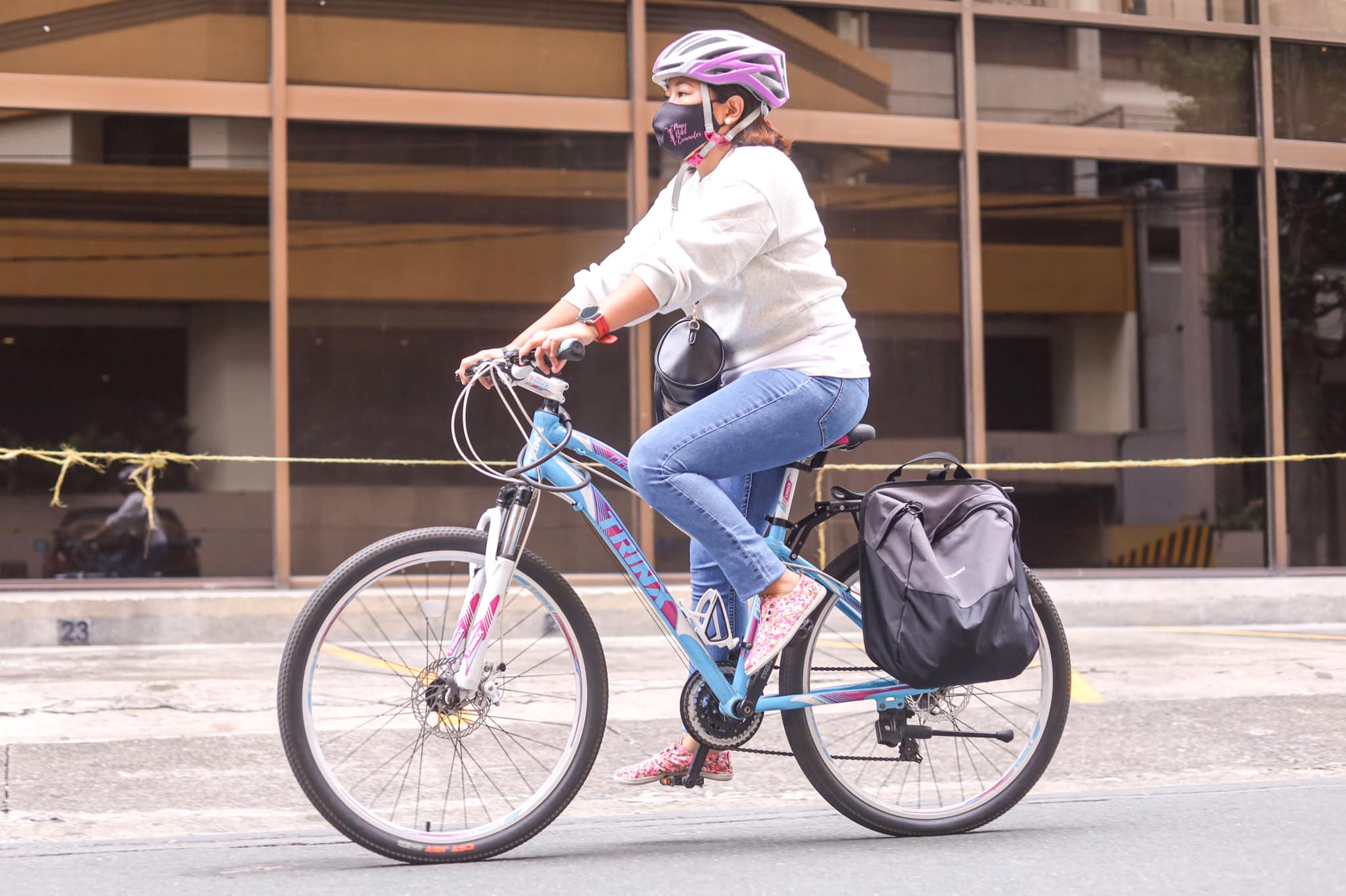 If you’re a Filipina and you need a safe community to talk to about bike commuting, this group is probably the best for you.

During the early days of the lockdown, cycling advocate Jaramia “Geri” Amarnani observed that there was an increasing number of female bike commuters in the country. She was happy to see more pinays cycling but she felt more concerned and worried about them.

Geri, who has been bike commuting for six years, told us that she did a lot of preparations before deciding to use a bicycle as her main mode of transportation. It involved a lot of research and online community memberships, she also made sure that she’s mentally prepared to take on the roads of the city.

“So nung nakita ko na maraming babaeng nagba-bike, natakot ako for them. Namomroblema ako sa mga nagba-bike ngayong pandemic,” she said, noting that they might have a hard time because many were forced to bike since there was no public transportation available.

(So when I saw that there are many women who are cycling, I got worried. Women biking became my problem.)

Her concerns were valid. We believe that it’s harder to bike commute when you don’t have a friend to talk to about your issues and unfortunately, there are newbies who don’t have anyone to help them.

(When you’re biking on the road, you’re just alone. And I don’t want them to feel that way. I want them to think at the back of their heads that they still have a community to go to when they arrive home, a place there they can share.)

That’s why with the help of some of her friends from mobility group MNL Moves, Geri formed “Pinay Bike Commuter Community.”

Pinay Bike Commuter Community is a Facebook group that is exclusive for female cyclists and members can start conversations about their concerns about cycling and women’s issues.

Back when she was a newbie, Geri would not hesitate in asking questions online about her commutes. However, there are times when other cyclists would not take her seriously, with some even embarrassing her. This can be intimidating and discouraging, that’s why she wanted to make her bike community welcoming and helpful.

This seasoned cyclist also knows that there are issues that other women might feel uncomfortable asking in public forums.

“It’s exclusive for women, no men, because we also talk about menstruation, pregnancy and harassment. I want them to say it, to share, as one way of unloading,” she said. “You know, we women keep it to ourselves and napaka-laking tulong noon kapag may nagkwento and malaking bagay kapag may umakabay sa iyo, na may magre-reply. Big impact ‘yun sa amin.”

(You know, we women keep it to ourselves and it’s a big help whenever we get to tell our issues to someone. It’s a big thing when someone makes you feel that you’re not alone and when someone replies. That gives a big impact.)

(So I tell the members, ‘please, no ones judging here, ask whatever you want to ask. A woman-to-woman approach is different. There’s care, there’s understanding. It’s not careless.)

The group focuses more on bike commuting but questions about different kinds of cycling and other bike concerns are welcomed. Geri envisioned a group where women—whether they ride a Japanese bike, a BMX, a foldie or an expensive bicycle—unite and help each other.

The biggest issue faced by Filipina cyclists today is harassment and sadly, many women are not keen on sharing their experiences online because there are a lot of victim blaming on the internet. That’s why groups like Pinay Bike Commuter Community ease the burden of these embattled individuals.

(It’s really important for women to voice out these things. That’s what pushes me, hoping that no ones get abused and that these things won’t happen again.)

So we asked Geri, is it hard to ride a bike in the Philippines if you’re a woman?

(It’s easy to bike in Metro Manila. You just keep on going out there until you feel that you’re part of the road.)

National Women’s Month is celebrated in the Philippines every March. Salute to all women especially to the female cyclists!