“Before the pandemic, wala akong other source of exercise. ‘Yung exercise ko is ‘yung mga gigs kasi parang four nights a week kami tumutugtog, so parang ‘yun ‘yung activity ko,” Gab said. “My goal, in terms of cycling, is just to be healthy. I just want to be healthy lang talaga.” 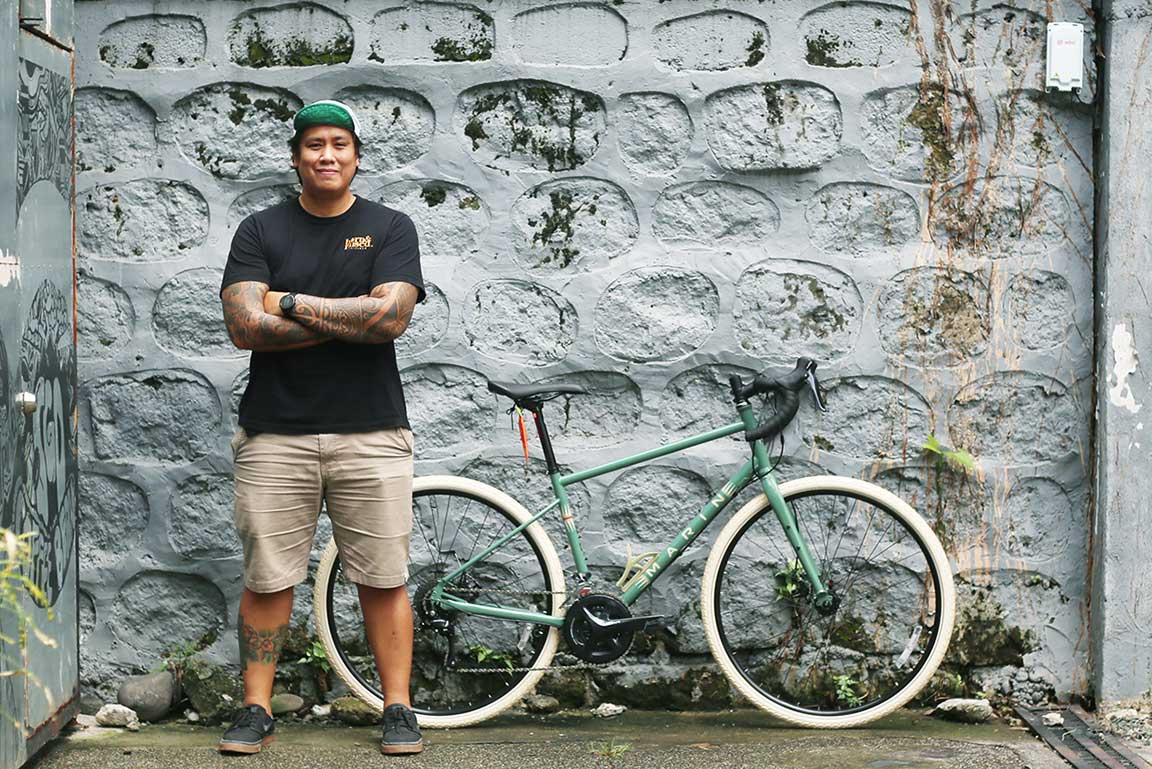 When live concerts were disallowed due to the pandemic, life became sedentary for Gab Chee Kee, especially during the first few months of the community quarantine. He’d sometimes be in bed all day or would just sit in front of his computer playing games online. Some days, he’d binge watch movies.

He’s the guitarist of band Parokya Ni Edgar and he recalled that his weeks used to be very busy before the lockdown. Well, his group is very active and is in demand here in the country and abroad. Filipinos would always love to hear them play their songs live.

For Gab, the live concerts are not just work. He considers them as his way of exercising because it keeps him moving. During our conversation with him, he told us that one of his realizations during this pandemic is the importance of health.

“Before the pandemic, wala akong other source of exercise. ‘Yung exercise ko is ‘yung mga gigs kasi parang four nights a week kami tumutugtog, so parang ‘yun ‘yung activity ko,” he said. “My goal, in terms of cycling, is just to be healthy. I just want to be healthy lang talaga.”

The guitarist added, “Super naging importante sa akin ‘yung exercise kasi ang daming news about coronavirus and you really can’t believe everything that you read. The only thing that you have control over is ‘yung katawan mo. Palakasin mo ‘yung katawan mo, mag-vitamins ka, get your daily dose of sunlight. Get stronger.”

He knew how to ride a bike when he was a kid but he admitted that he was not consistent with cycling. There are years when he’d be off the saddle, though he’d return from time to time. He got back on this two-wheeled ride this year because of his girlfriend Kha.

Kha told Gab that he wanted to try cycling and he gave her a gravel bike. That time, Gab still has a BMX but he decided to get a bigger bicycle for him so he could join his girlfriend with her cycling adventures.

Most of the time, they’d bike in La Union since Kha was already based there. Gab recalled that their first bike ride was on the province’s new bypass road. It was fun, he quipped, except when there are fast trucks beside them. The couple completed a 5-kilometer trip.

From that short ride, they’re now finishing an average of 30 kilometers per ride — and that would sometimes extend to 70 or 80.

This biker considers himself as someone who prefers cycling short but more technical routes over long-distance trips. Gab said that he enjoys the roads where he can strategize his moves in terms of his pace, breathing and cadence.

The couple told us that years ago, they also used to do bike dates. Gab was introduced to trail rides before because of his friend Raymund Marasigan, the vocalist of the band Sandwich. He enjoyed it so much that he invited Kha to try it with him. It was interesting that after more than a decade, it’s now the girlfriend who prompted the initiative to get them into bicycles again.

If he’s not cycling with Kha, Gab would bike with his friends from the music industry. A few months ago, he was able to conquer Sumulong with Raymund and IV of Spades’ Badjao de Castro. He also did a few long rides with drummer Mike Dizon and rapper Gloc-9. In La Union, we see that he bikes with singer Ebe Dancel.

However, both of them said that they’re quite competitive when biking. “Nag-uunahan kami pero sandaling-sandali lang. Iiwanan ko siya tapos after a few minutes, iiwanan na niya ako.”

Biking in La Union is way easier compared here in Metro Manila, Gab noted. He said that in the province, the cyclist can have the whole shoulder by himself unlike in the big cities where he’s battling space with motorized vehicles. Plus, the speeding cars and trucks in the metropolis are intimidating.

Though biking around the inner streets of Quezon City is fine, he added. He’s used to it, anyway. As a kid, he’d bike around Teacher’s Village with his BMX. He owned a restaurant a few years ago in Maginhawa and he’d recall that he just bikes to go there because it’s convenient.

We met Gab in a coffee shop in Teacher’s Village and he went there with his beautiful Marin. The trip was just easy, he said, since he lives nearby. After our interview, he went to Built Cycles to check some awesome bike accessories for his beloved ride.

Our meeting was in October and that time, he was busy with his band Parokya Ni Edgar because they’ll be releasing a new album soon. That’s five years after “Pogi Years Old” in 2016. Wow, we’re excited!