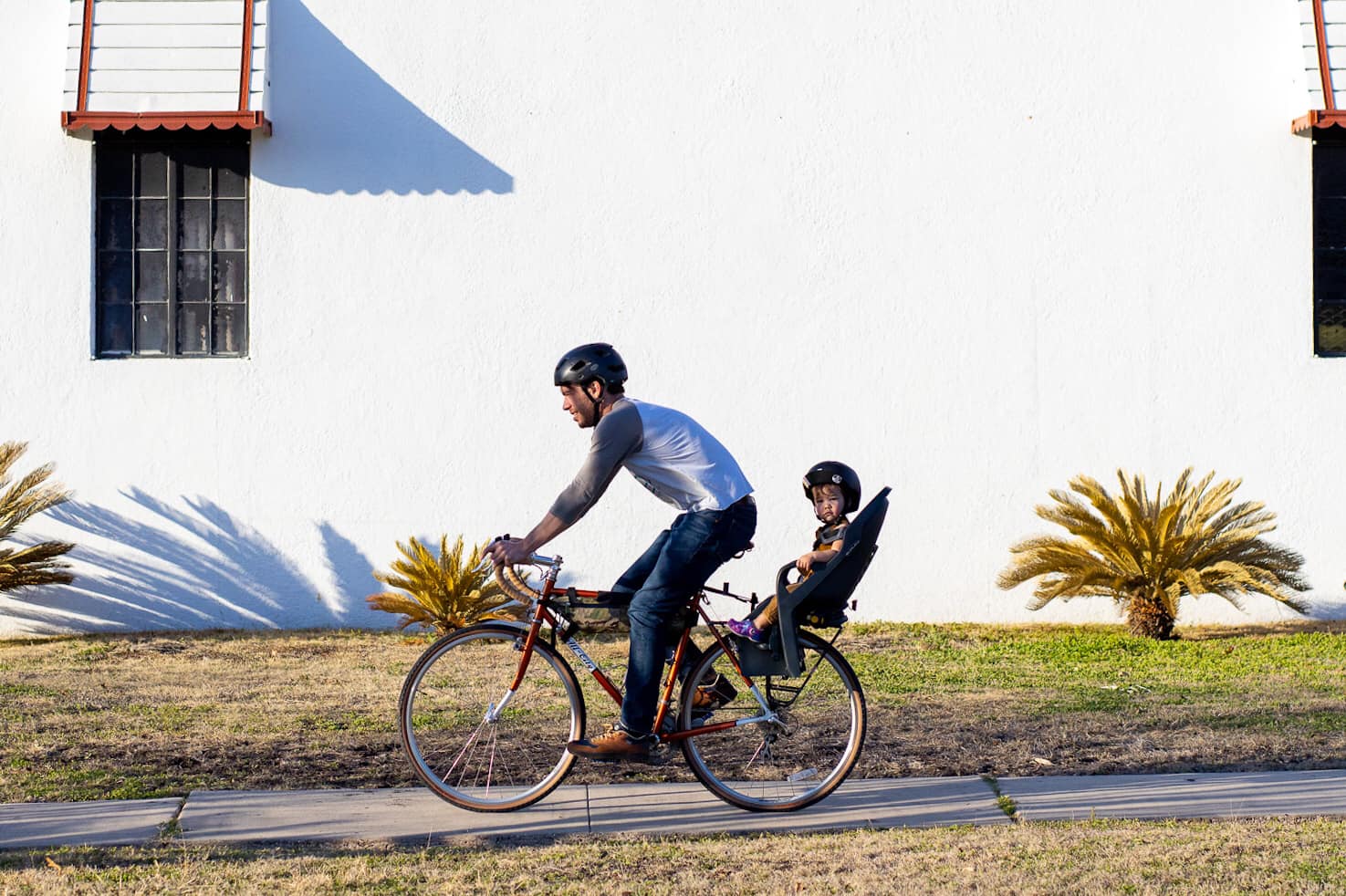 Photographer and graphic designer Tanner Freeman has been riding bicycles for a long time, using the versatile vehicle for his commutes and weekend tours. When he became a dad, his cycling habits changed but the love for bikes still remains.

“Nowadays, I mainly just ride with my family to the office or for some mental health. Being a dad has a way of keeping your workouts closer to home,” he told First Bike Ride. “In the past, I really enjoyed long rides (50 to 100 miles), pretty much my weekend pastime. I also was pretty deep into the gravel grind scene for a while.”

Cycling, according to Tanner, reminds him of his childhood and it connects him with the things that he loves—family, camping, nature and architecture.

And now, he gets to share the bike love with his daughter. Of course, his one-year-old baby still can’t pedal but she gets to ride with his dad at the back of his All City Space Horse.

“Since maybe this time last year, me and my wife have been taking our daughter on bike rides here in San Antonio,” he said. “The ride is pretty smooth, but we often use the older gravel trails along the irrigation canal, mainly because my daughter likes the bumps.”

They usually ride along Spanish missions in Texas, usually from Mission Reach to Mission Espada.

“My favorite part is that the ride combines history with the nature and wildlife surrounding the river. When we ride, our daughter Charley feels really free and throws her hands out to the side and feels the wind and quacks at the ducks she sees,” he added. “Sharing that as a family is really special.”

This awesome dad considered getting a bike trailer for Charley but he was reminded of his dad who had a carrier back in the day where little Tanner would be riding along with his father.

Tanner and his family plan to go to Cagayan de Oro, his wife Angie’s hometown, this summer and told us that he wants to get a bike that he can use for commuting and for touring.

He thought of buying a car or motorbike but eventually decided on getting a bicycle. It is because he needed a ride to easily go around town for errands and exercise, he doesn’t want to worry about vehicle registration and he thinks of biking in Camiguin.

“Honestly with Covid, I will be really happy just to go. We have postponed our trip a whole year and will be glad to see family and barkada, eat good food and let my daughter get spoiled by her lola,” he said.