During the actual ride, the mom admitted that she was nervous. As a couple who rides a bike in the city, they know how vehicles in Metro Manila treat cyclists and they’re worried that their son might experience the same. 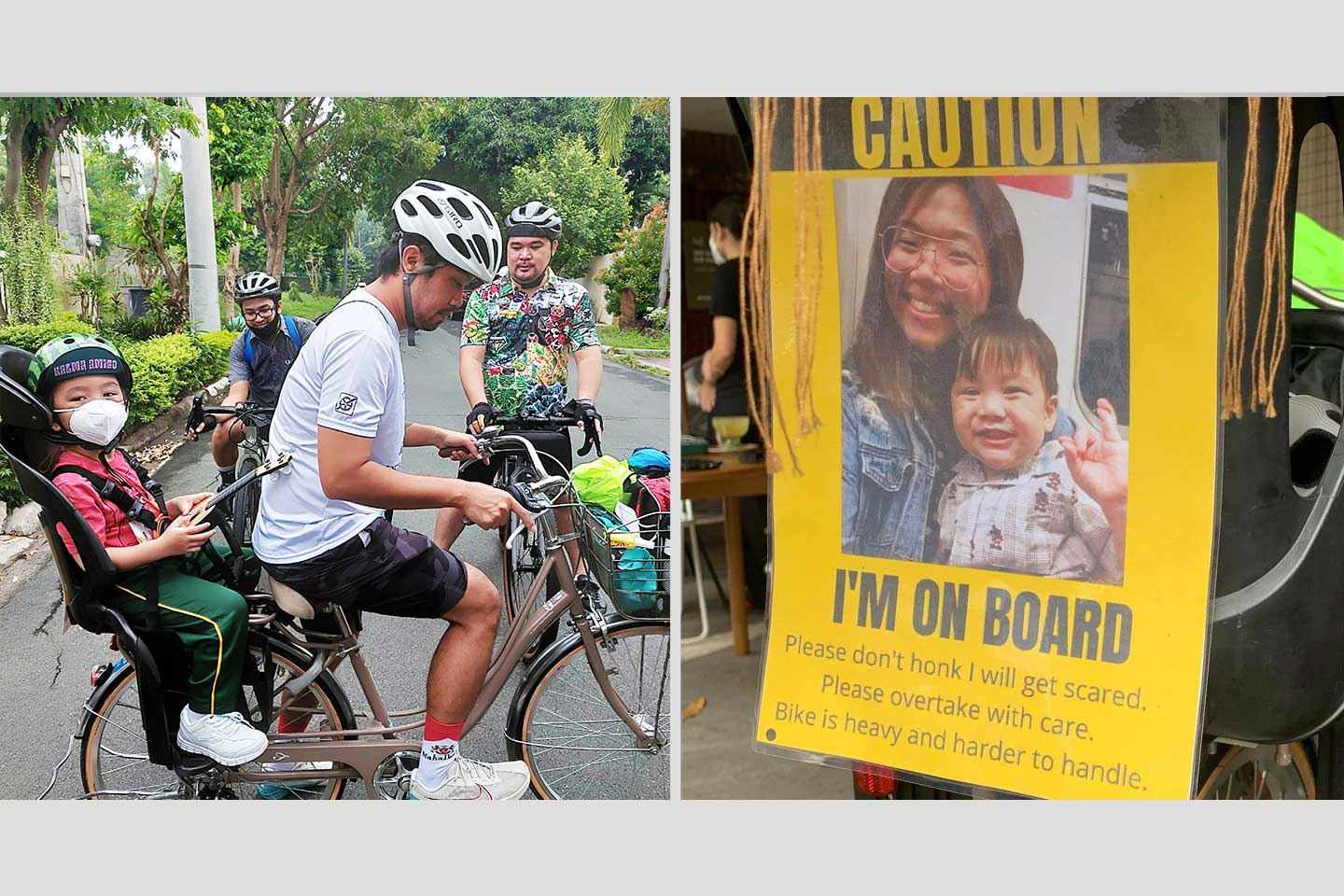 Parents Ruth and Aaron Galang decided to bring their 5-year-old son Adaiah on his first day of school in Las Piñas using a bicycle. The trip was 12 kilometers from their home to the campus.

As a parent, they were really worried about how biking to school would work out, especially that they were carrying their child with them. Despite the fear, Ruth told First Bike Ride that she continued to push through with the ride because she felt empowered.

“Being part of the Pinay Bike Commuter Community on Facebook, I frequently saw women cyclists from all over the Philippines and their switch to active transport — for work, errands, and yes, transporting their kids to and from school. They really made me feel empowered,” she told us.

She added, “I followed moms who brought their kids to school, moms who lugged weeks of groceries on their bikes, and women who went to work everyday on their bikes. I wanted to be part of what these women are doing – normalizing women cycling as a means of transportation. Encouraging women that ‘hey we can do it too!’”

They needed to be prepared for the big day. Ruth recalled that they did around three test runs to make sure that everything would work out fine on their end: orienting the kid on how to behave while on the carrier, the anticipation of the kid’s reaction toward uncomfortable situations and how they’d handle uphills using a 6-speed mamachari.

During the actual ride, the mom admitted that she was nervous. It helped that the family was accompanied by friends during this trip. As a couple who rides a bike in the city, they know how vehicles in Metro Manila treat cyclists and they’re worried that their son might experience the same.

“I was afraid motorists would not care about my son, however, I was surprised that wasn’t the case,” Ruth said. “We didn’t experience the usual treatment we got when it’s just us husband and wife cycling. People were much kinder and understanding. It was such a treat to see their faces when we went past them and they saw my child relaxing in his seat.”

Adaiah was excited too. According to Ruth, the kindergarten was looking forward to this ride. He even said that he’d bring a raincoat just in case it rains during their trip.

Ruth mentioned that during their test runs, they struggled carrying their 21-kilogram son and his backpack during uphill slopes. She also said that they’ve encountered rude riders of motorcycles and e-bikes. So during their first bike ride to school, the mom had an idea to give caution to other motorists.

“I saw a viral post on Facebook where a delivery rider put a photo of his family on his rear bag which gave me an idea to do the same. I put a laminated printed photo of my son and myself with words saying ‘Caution: I’m on Board’ right under his cute photograph,” she said.

“It even had reminders not to honk as it would scare my son, to overtake with care and that the bike was very heavy and hard to handle so to be patient with us. It sort of reminded motorists that we were human beings and it actually worked — cars were significantly kinder and more careful. Motorcycles gave way to us too.”

The couple bought a carrier even before their plan of biking to school. Ruth said that they purchased the kid’s bike seat for them to be able to spend more time with their son while doing an activity that they enjoy.

The kid knows how to ride a bike but he only cycles inside their village and gets too tired easily after a kilometer of biking. It’s hilly in their area too, Ruth noted. That’s perhaps why they’ve decided to just carry Adaiah on a bicycle during his big day as a student.

“It’s incredibly economical since gas prices are high and the route to my son’s school requires passing through 3 schools with insane traffic. And his campus is inside a village that will require me to apply for two village passes that’s ridiculously costly,” she said.

“It saves so much time! You don’t get stuck in traffic, you don’t get stuck in long drop off lines, it’s economical, it’s environmental, and it paves the way to normalize having kids, fathers, and mothers on our roads. I am not the first to do this, but it was through others who did it first that I found the courage to start. It is through others that brave the daily commute that I am encouraged and I only hope I am able to encourage others just as I was.”