Anton, even before riding a bike in the city, knew the science and benefits of cycling — after all, he finished a graduate degree in Transport Economics. But he admitted that he initially thought that biking in Metro Manila everyday is too difficult. 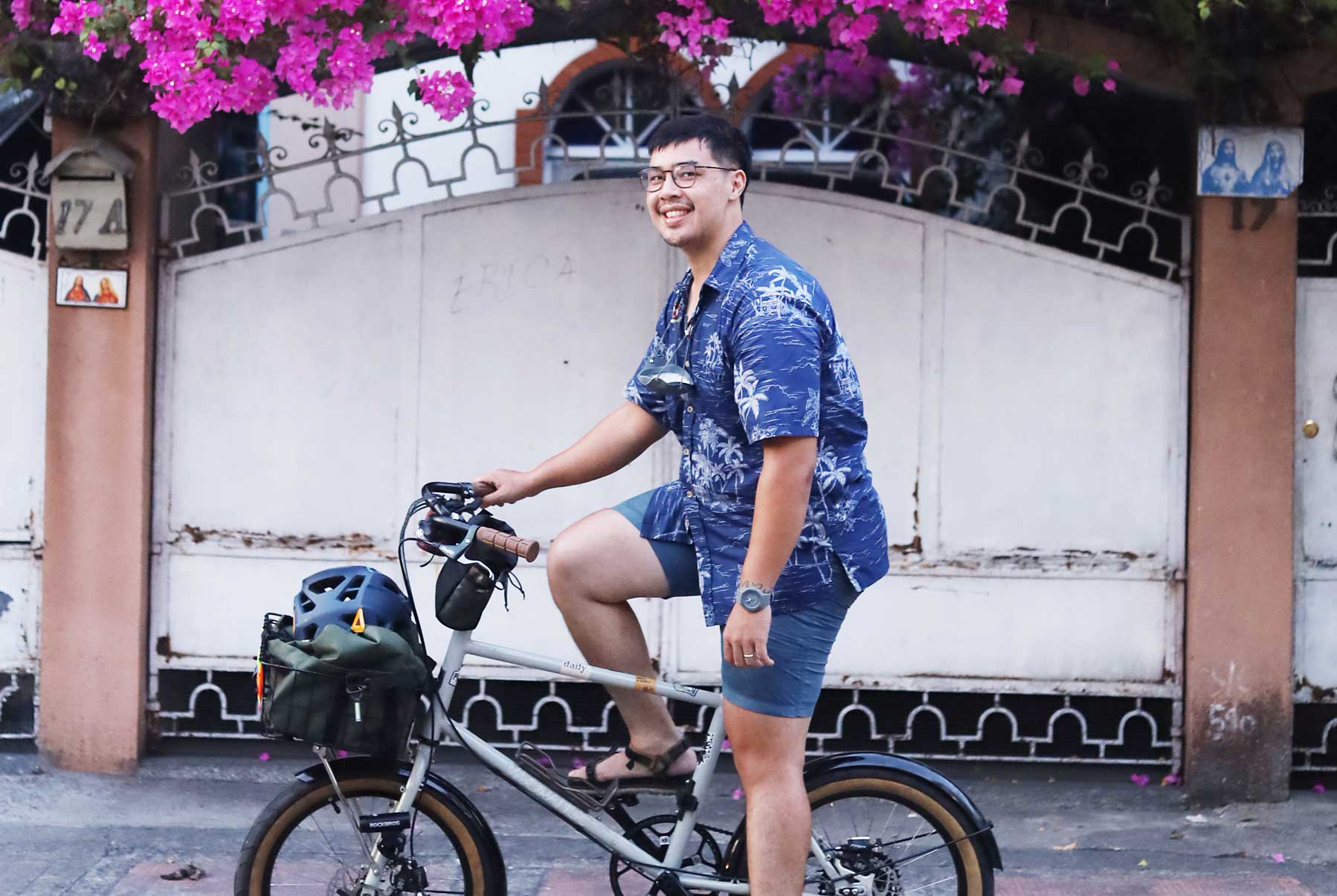 When Anton Siy came back to the Philippines after finishing his Masters degree in United Kingdom’s University of Leeds, he was mostly using the MRT for his commute. That was in 2016 and back then, he said that the train rides were “okay.”

However, the MRT started to deteriorate in 2017 and this transport planner began using a car more often — it’s either he drives his own vehicle or hires one from an app.

But you see, driving a car in Metro Manila can be really inconvenient and difficult. Anton recalled that parking his vehicle was a lot of struggle when he was visiting his then girlfriend Rowhe, who is now his wife, in her apartment.

“I was driving a car that time and it made visiting her kinda challenging so I thought, why don’t I get a bike and I can ride a bike to see her,” Anton said. “Then it turned out that her sister had a bike that I could borrow so I borrowed that.”

It was a Trinx folding bike and that was Anton’s first bike as an adult, it was also the bicycle that opened his eyes to the love of cycling. He thought that if he can cycle 2 kilometers to see Rowhe, maybe he can do a 5-km trip to his office.

Biking to work became a regular thing for him. Anton, who is the Chief Transport Planner of Pasig City, realized that maybe he can bike to meetings. So he did. On weekends, he would bike to the mall and to nearby cities like Makati and Quezon City.

When we asked Anton about a memorable bike ride, he told us that one good memory was cycling from Pasig to Batasan in Quezon City. He needed to attend a hearing.

This guy was almost laughing as he remembered how unprepared he was for the uphill San Mateo-Batasan road, which prompted him to take note about the importance of route planning. He added that he also learned about the significance of a sunblock.

“I think that was interesting because I decided to bike to a meeting where people were saying that I was crazy for not driving my car. I did that just to find out for myself what the limits of cycling in the city were,” he said.

Cycling or walking everyday and experiencing the road out in the open, without being shielded by the metal sheets of an automobile, give transport planners a better perspective on how they can do their jobs well.

For Anton, there’s a lot more knowledge you can get just by riding your bike than just taking a car.

“One thing that I really appreciate about cycling around the city as a professional transport planner is you really get to appreciate the finer details of street design in a way maybe I wouldn’t be able to appreciate if I was only every now and then stepping out of a car,” he said.

He added, “It’s one thing to do a site visit in one day but it’s another to really feel the effect of street design iterated over days, over weeks of experiencing the design over and over.”

When we met Anton, he was riding a beautiful mini velo: a cool gray Velo Orange Neutrino with a big front basket and a portable speaker. Back at home, he has a green Surly Pack Rat and a Brompton.

Anton, even before riding a bike in the city, knew the science and benefits of cycling — after all, he finished a graduate degree in Transport Economics. But he admitted that he initially thought that biking in Metro Manila everyday is too difficult.

“Once I tried it for myself, knowing that I was able to kinda pick it up easily, that’s when it opened my eyes that this is something that anyone can do, even learning to bike everyday in the city at a late age like I did,” he said. “It turned out that a lot of what I felt would make it impossible was not actually true.”

If you’re following Anton on social media (you have probably seen his tweets if you’re active on the bird app), you’ll know that he’s a good influence in the area of urban cycling. In Philippine bike terms, he’s a good budol too: he randomly sends bicycles that are for sale in group chats or will tag a buddy on a Facebook ad. It was also amazing to learn that his staff in Pasig Transport bikes too.

What’s more incredible was him encouraging more people to bike by making cycling more accessible and convenient to the public. His office has managed to put up bike racks around the city and they have installed many protected bike lanes. However, there’s one more important thing that he noted on how to invite more people to cycle.

“Many people sometimes have this idea that cycling for transportation is much more important than cycling for fun and recreation. But I would say that one of the easiest ways to get people to get into this kind of lifestyle is to convince them of how fun it is,” Anton said.

True to what he said, Anton is always enjoying when he’s on his bike and that biking to the office daily means having fun everyday. He mentioned that cycling is a form of stress relief, even when you’re commuting to work.

We asked him, what’s the most fun in riding a bike?

“For me, the most fun when riding a bike is that I ride with a lot of music. I have a portable speaker there so I like to play a lot of dance music,” he said. “So maybe, when I get to the part of the song with the highest energy, just when you’re about to sprint or climb, for me, that’s the most fun.”

His go-to music is old electronic music. His favorite would probably be “Wait” by Adventure Club but he sometimes plays the pop and high energy Carly Rae Jepsen songs.

“Runaway with me,” he said.