“Nowadays, the city seems way smaller than I thought it was. It really did change how I look at Metro Manila. I used to think that everything was so far." 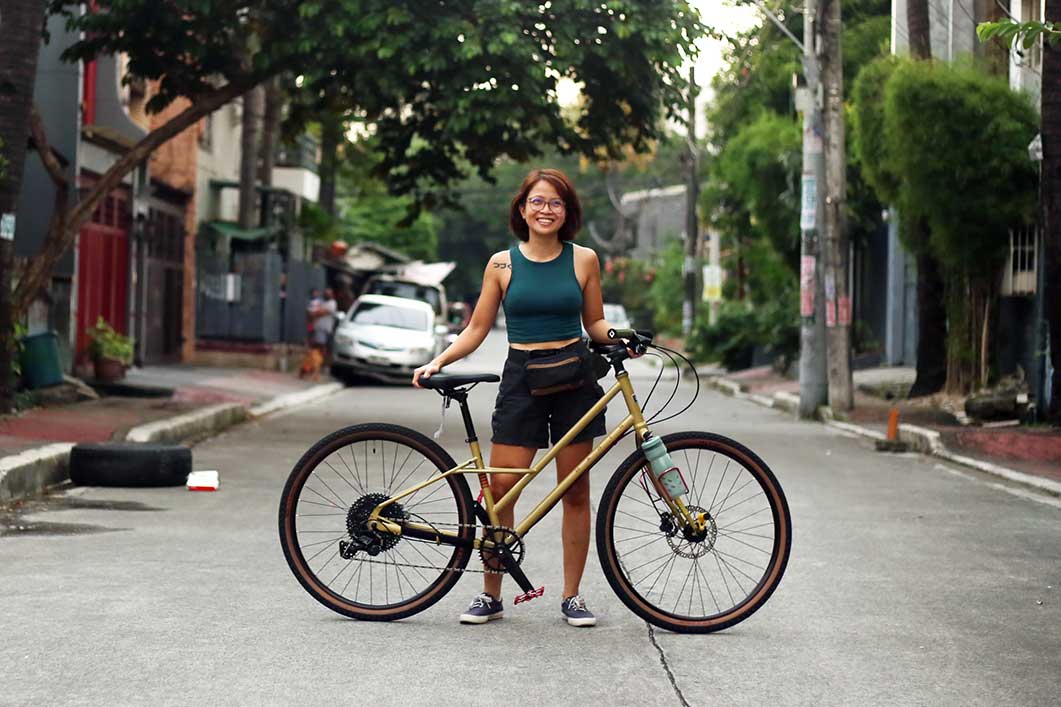 Ja Dueñas would climb walls — and maybe rock formations on weekends — three to four times a week. But this was before the pandemic and prior to the many restrictions brought by the lockdown.

(I was very active before. I used to climb regularly, it’s like second nature to me. So imagine the break from routine during the start of the pandemic. One of the initial reasons why I started biking is more for fitness because gyms were closed for a long time.)

Her other purpose for getting a bicycle was transportation. She can’t drive a car, Ja admitted, and there was no other way for her to travel but to walk since public vehicles were not allowed to operate during the early months of the community quarantine.

Back before the global health crisis hit the country hard, she would rely on ride-hailing apps most of the time when meeting friends. Now that she’s cycling, she said that her perceptions and points of view regarding moving around the city became different.

“Nowadays, the city seems way smaller than I thought it was. It really did change how I look at Metro Manila. I used to think that everything was so far,” she said. “Kung may mag-aaya sa akin mag-dinner, una kong iisipin is baka kaya naman mag-bike or kung may bike parking ba? I think it has unexpectedly changed the way I want to live my life.”

(When someone asks me out for dinner, the first thing I’ll think is maybe I can bike it or if there’s bike parking? I think it has unexpectedly changed the way I want to live my life.)

Even though she only started regularly cycling in July 2020, Ja noted that she already knew the wonders that a bicycle could bring. She recalled that there are times when she would rent a bike whenever she’s traveling in the province or abroad, discovering things that she’ll probably never see and experience if she’s on a motorized vehicle.

For example, a memorable trip was in Siargao when she refused to join her friends on an afternoon drinking session and instead chose to wander around the beautiful island with a bicycle. She remembered cycling for hours, stumbling upon small businesses far from the main road and appreciating simple local scenes.

It was not easy cycling as a beginner in the busy streets of Metro Manila, Ja said. With the help of her boyfriend, she’d already be happy whenever she gets to bike around her neighborhood in Quezon City and cover five kilometers for a day.

Eventually, she became confident biking with cars on busier roads and traveling to different areas of the metropolis became comfortable. There was a sense of accomplishment when this cyclist was finally able to cycle to Mandaluyong, moreover conquering the inclined pavements of Rizal.

(Before, it seemed like I was really afraid, even just going out of the house with a bike.)

We asked her what she enjoyed most about biking, especially now that she’s been doing it for more than a year. She said, it’s appreciating and understanding the bicycle more like its parts and accessories (which includes the useful and the useless), customizing the vehicle and putting one’s identity into it.

But among the fun things that a bike can offer, including the lifestyle that comes into it, Ja mentioned that her bicycle is now mainly used for transport.

“I’ve always thought of myself as someone simple pero mas naging simple noong natuto ako mag-bike commute. I realized that I didn’t need a car if I’m staying in Metro Manila,” she said. “I have to always consider that it’s an important mode of transport for me, that it’s always going to be one of the faster ways to get from point A to point B, at least in this city.”

(I’ve always thought of myself as someone simple but it got simpler when I learned to commute by bike.)

There’s a bonus that comes with her love for biking too. Aside from gaining a new hobby to bond with friends and a mode of transport, she said that she’s delighted to be with an encouraging cycling community. Despite the presence of some gatekeepers, cyclists are generally welcoming, supportive and friendly.

“I’ve always been kind of invested in the community part of climbing. That’s one of the reasons why I used to organize climbing competitions because I wanted to cultivate the community,” she said. “And I feel like cycling wouldn’t have stuck with me if I didn’t feel like there was a more supportive community within it.”