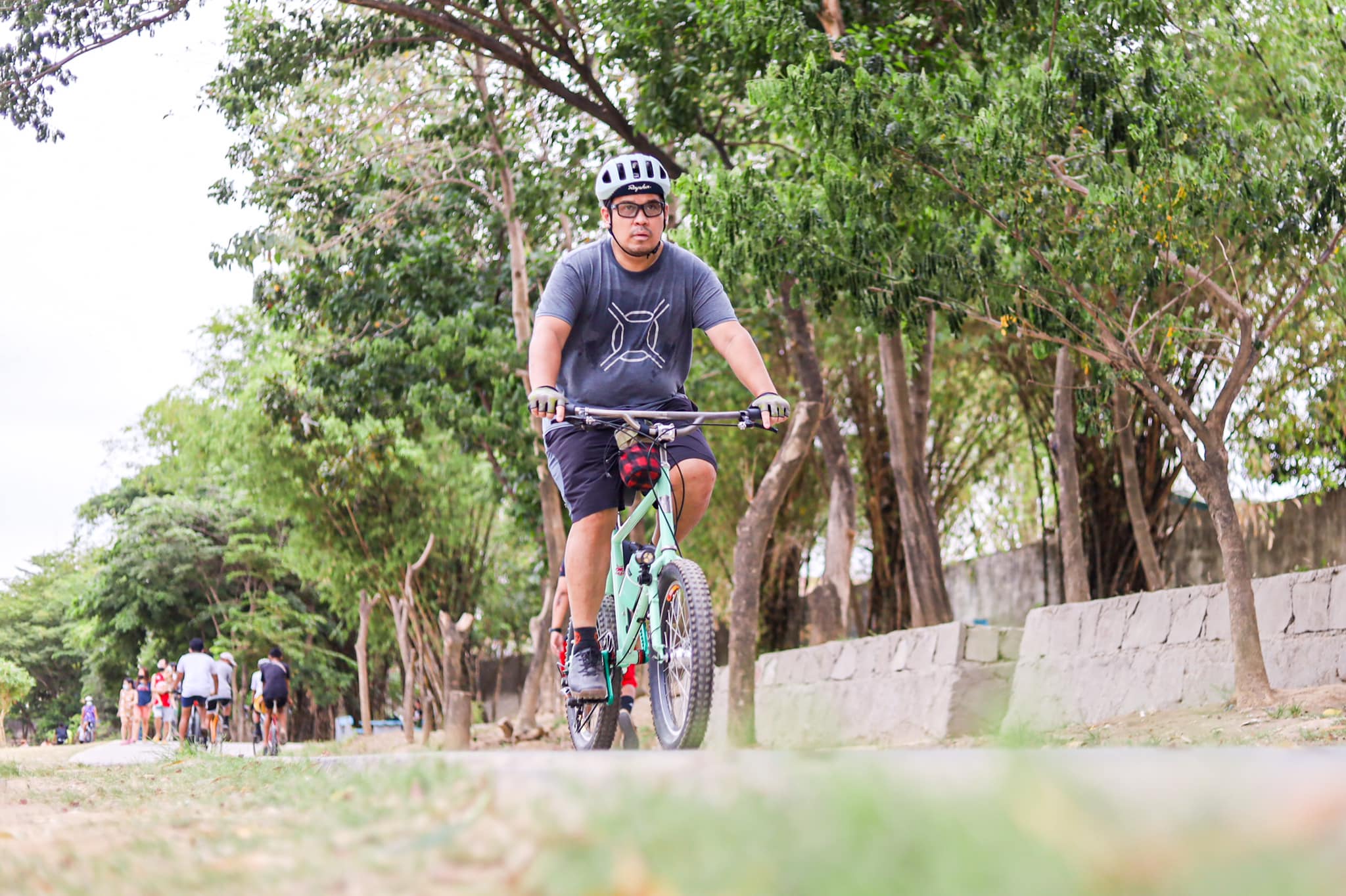 He builds at least six to eight beautiful bicycles a year for himself. There was even a time when his bike count reached ten.

Dundee Garrido arrived with an attractive minivelo in Marikina Rivera Park when we met him for our shoot. It’s a Velo Orange Neutrino in pistachio with stunning green crank arms, a customized handle bar from Oddity Cycles and some complementing accessories.

Days before this, we rode with him around the city and he was using a neat-looking gray Surly Pack Rat.

Apparently, Dundee has many bicycles. More than two, actually. And they are not ordinary boring bikes, they are beautiful two-wheeled machines with parts that he carefully picked for his comfort and to please his aesthetic standards.

His fascination with making personal bicycle projects started with simply changing parts and being particular with small details… until he found himself owning more bikes.

“Siguro nag-start na ako mag-count noong 2018, pero not all the time ay those bikes are with me. Noong nag-multiple bikes na ako, I would have three to four at a time,” he added. “Pero in a year, siguro mga six bikes ‘yung bini-build ko. Nung 2019 malala… ten bikes.”

His process is simply selling parts or bicycles that he’s willing to let go already in exchange for building a new one. He told us that even though he’d like to keep everything, it’s impractical to have them all because he wouldn’t be able to ride the entire collection.

Dundee currently likes building steel bikes because it allows him to be more creative, it’s a plus that his riding style gravitates towards bicycles that can be made from this material. He’s currently into gravel and commuter bicycles.

This guy started riding with a mountain bike. Back in 2015, he was invited by his bosses to ride a bicycle with the cyclists in their office for leisure. Then he rode with his cousins and their friends until he made new friends and his interest with the vehicle evolved.

He admits that he is not a fit person that’s why he feels motivated whenever he accomplishes a cycling milestone like finishing a hundred-kilometer ride, climbing mountains or surviving a difficult route. This is the biggest reason why he likes biking and then comes bike building.

The most memorable bike rides for Dundee are his Sierra Madre loops, a bike trip in Japan with a loaded bicycle for days and when he participated in an audax.

“Biking has brought ‘chill’ to my life—na relax lang, na masaya pa rin, na masaya talaga,” he said. “It takes away a lot of anxiety and pressure for me. It’s fun and I get to exercise.”

Building personal bikes can be pricey, he acknowledged, but it doesn’t necessarily have to be. His main consideration is mainly about comfort, which makes sense because he’s using it.

Aesthetics comes next. According to Dundee, he prefers clean-looking bikes. What does it mean? It doesn’t have to be extravagantly loud, as long as colors coordinate well and it’s easy on the eyes.

But to be honest, he admits that his mood affects his builds. It’s like art and Dundee is the artist.

Here’s his tip for people who’d like to build their personal bicycles.

“Build it based on how you want to build your bike, kung ano ‘yung gusto mong kalabasan kasi makikita mo ‘yan araw-araw eh. Madami kang makikitang inspirations but not everything that you will see or what other people will tell you on how your bike should look like is correct. It’s yours so do what works for you,” he said.

At the end of the day, you’ll be the one riding your bicycle. We totally agree with Dundee.