Noy Mesperos recalled that when the shop was forced to close during the beginning of the pandemic, his clients would check on him if he was safe and others would visiting him at his home in Tandang Sora. 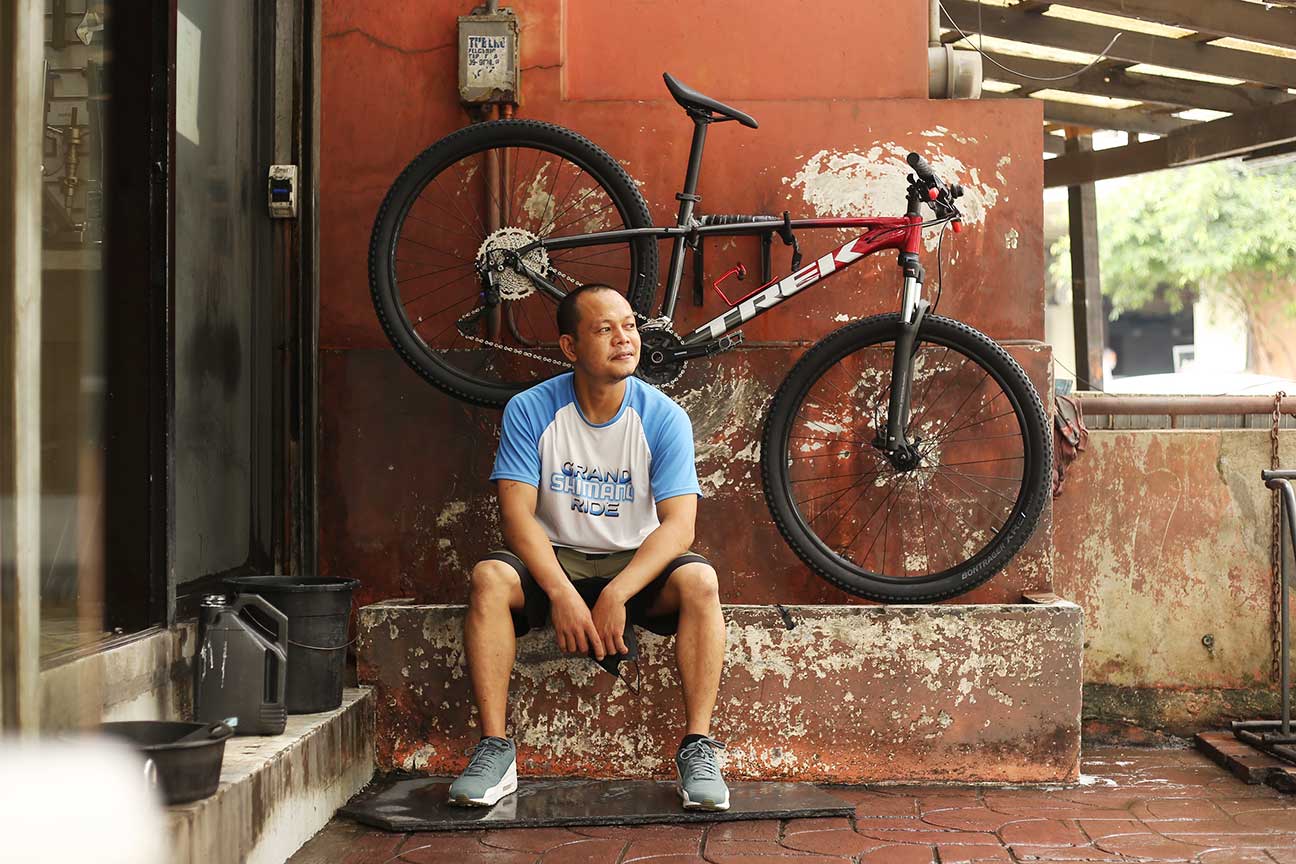 Unpacking new boxes of mountain bikes was not new for Noy Mesperas, it’s part of his job in bike shop Basikleta in Quezon City. A set of Trek Marlins arrived last week and he needed to immediately assemble the parts so the bicycles can be put on display as soon as possible.

The first box that he opened was a dark blue Trek Marlin 7, something gorgeous but was not fancied by this bike mechanic. And then he unboxed the second unit — a Trek Marlin 6 in red. Instantly, Noy’s mood lit up and instinctively carried the frame just to get the feel of it.

(When I opened the Marlin 6, I said “the color is good.” So I carried it and right away, I asked for the price.)

After assembling the new units, everything was displayed in the store except for the red Marlin 6. Noy has finally decided that he’s getting a new bike.

Around five years ago, this bike mechanic used to regularly ride a step-through bicycle. He told us that it was decent but was also pretty hard to use. When its air shock got broken, he decided to give cycling a rest and chose to use a motorbike for his travels.

(It’s just now that I had a bike that’s somehow beautiful so I told myself that I’ll now put an effort in biking. It’s because I’m getting fat too.)

The bike is not the cheapest in the market but he got a good deal and was allowed to pay by installment. Everyone in the bike shop, including its regular patrons, was really excited that he’s finally having his own bicycle. One group of loyal customers called “Basikleta Bakal Boyz” was the most supportive, Noy said.

According to the bike mechanic, the cyclists from Bakal Boyz are going to help him in purchasing the bike — Noy was even given a better crankset, shoes and some cycling accessories, among others, by some of its members.

(The Bakal Boyz are looking for parts because they wanted to buid a bike for me. Their stule is they’ll ask me to look for some parts, I’ll assemble it but it’s a surprise that the bicycle will be mine. Then they learned that I’m interested in this bike. So I almost cried the other day when they said that they’ll help me with the payment.)

He’s really thankful for the community that was built around Basikleta, his workplace for five years and a half. He recalled that when the shop was forced to close during the beginning of the pandemic, his clients would regularly check on him if he was safe and others would visit him at his home in Tandang Sora.

There were moments when he would also be invited on group rides. But since he doesn’t have any bicycle back then, his clients-friends would take the effort to find him something that he could use.

Noy recalled that he’s been working in the cycling industry since he arrived in Manila from Bohol around 15 years ago. He first worked as a bike assembler in a factory and admitted that it’s not that sociable unlike his current work at Basikleta.

(I feel happy here. When I used to work in the factory, I didn’t have many friends because we only assemble and then give the bikes to the delivery truck and that’s it. Here, it is different, I can talk with people. My hands are working while having conversations. It’s fun.)

When you have your bike serviced at Basikleta, you’ll see Noy welcoming you with a big smile because he’s stationed outside, near the customers’ waiting area. He’d entertain your questions too even when he’s busy washing a bicycle.

Working in a bike shop is very fulfilling, he noted, especially when clients praise his work. He’s proud of being a mechanic, builder and bike washer. This job is helping him support his wife and his three children, with his eldest entering college soon.

(I was able to support them because of bikes. The kids would say when they’re doing laundry that my clothes are full of grease. I told them that those came from bicycles. They might be full of grease but that’s our source of living. That’s good, right?)

Noy is thrilled with his new mountain bike and he can’t wait to use it during long rides with friends. Commutes will be exciting too, he mentioned. He told us that he’ll be taking a longer route from the bike shop to Tandang Sora because he wants to enjoy a good city ride before heading home.